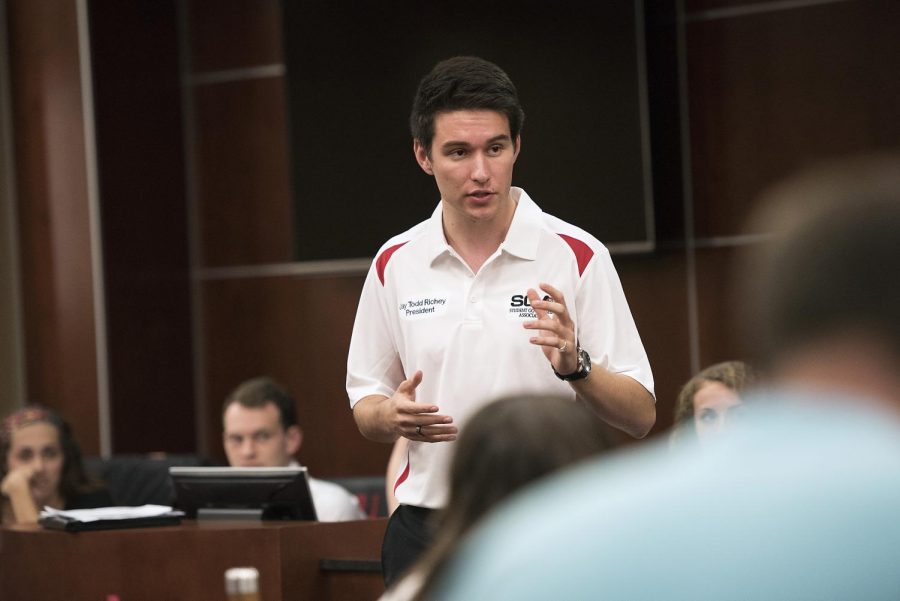 Almost every seat was full for the first Student Government Association meeting of the year. New and old faces met for the first time and discussed what the upcoming year would look like.

James Line, who was sworn in as the new chief of staff, said he was especially excited about the MyCampusToo Initiative.

“One of the biggest things we will be working on is MyCampusToo. That is going to be the centerpiece, hopefully, of what we plan on doing this year,” he said. “Hopefully that passes and we can get to work on that.”

“James is my best friend,” Richey said. “James is also the person that (sic) will advise the entire executive cabinet throughout the entire year.”

Most of the meeting served as an introduction as to what SGA does and what each position does.

Richey said any student interested in getting involved should definitely think about becoming a part of SGA.

Richey said that all the applications are due by next Tuesday. The election night will be Monday, Sept. 14.

“As senators you have a way to change campus that many students don’t, and that’s through legislation,” he said. “We would love an organization that is active and always trying to act on behalf of the student body.”

Richey said his vision for this year in SGA is to accurately represent the student body.

“We must be the organization that leads on behalf of all students,” he said. “So many times we forget about students at Owensboro campus, Glasgow campus, Elizabeth-town Fort Knox, online classes, even dual credit; they are WKU students.”

Jody Dahmer, SGA senator, also offered a word of advice to the new students in the room.

“This is a very controversial area especially when people have opinions that may or may not be in the majority,” he said. “One of the things that I learned most when I was here last year is that no one is going to speak your opinion for you. These decisions actually make a difference on campus.”

Next week, SGA will have four items to vote on including a bill to recognize the WKU Elizabethtown/Ft. Knox Student Body Association and a proposal to create a sustainability committee.