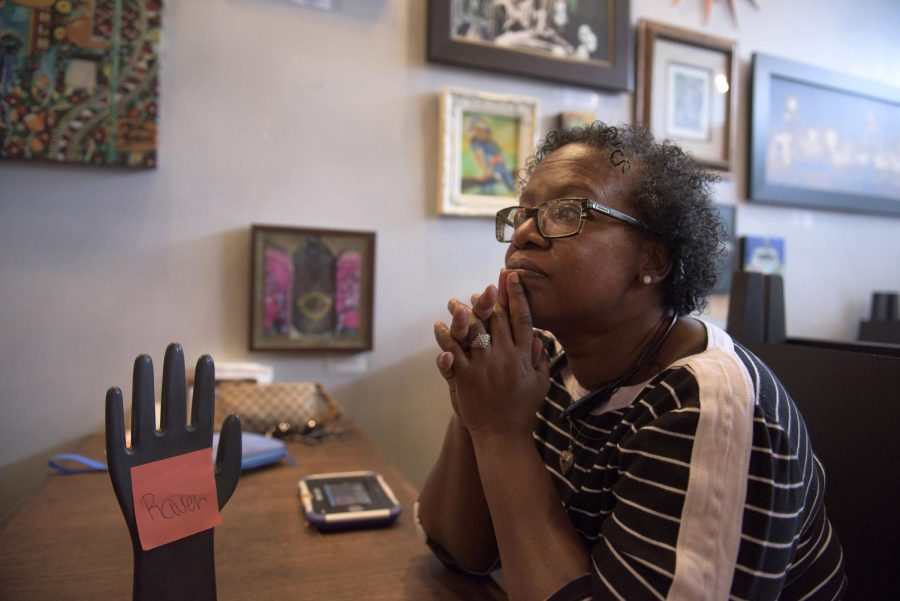 Gwen Holmes, a survivor of Hurricane Katrina, rests at the table during the Po'boy Palooza and Hurricane Party inside Tea Bayou on Saturday, Aug. 29. "We like to eat here because the food reminds us of home," Holmes said. Holmes and her family were without electricity for 3 weeks after Hurricane Katrina's storm surge breached the levees surrounding New Orleans. Her journey afterwards eventually brought her to Bowling Green.

Madison Martin
On a humid Saturday at the end of August, one of the most devastating natural disasters in the United States’ recent memory reached its 10-year anniversary.
According to History.com, Hurricane Katrina, which killed close to 2,000 people and displaced hundreds of thousands more, devastated the city of New Orleans and other coastal communities on Aug. 29, 2005.
Greg and Theresa Shea, owners of local Bowling Green restaurant Tea Bayou, once called New Orleans home. Although their neighborhood flooded, they were fortunate enough to sustain only a broken fence and a garage damaged by a falling tree branch. They haven’t forgotten the impact FEMA and the Red Cross had on the rest of the storm victims. This impact inspired the Sheas to do something positive in memory of the harrowing, historic event that was Katrina.
“We were sitting down, late July, and [Theresa] said, ‘Why don’t we do something for the Red Cross?’ because they helped us out after Katrina along with hundreds of thousands of other people from Louisiana—all the way over to Florida, really,” Greg Shea said.
Shea also remembers the organization setting up stations and handing out water along the interstate to evacuees.
“The Red Cross was still there, and man, it was amazing seeing them in action, it really was,” Greg Shea said. “They were all over the place.”
The Sheas decided to take donations benefitting Bowling Green’s local Red Cross for the month of August. At the same time, they celebrated the restaurant’s four-year anniversary.
The Sheas offered new menu items— collectively called Po’Boy Palooza—throughout the month.  The specials culminated in a “Hurricane Party” on the date of the disaster: drink and food specials were offered throughout the day, and 10 percent of the sales went directly to the Red Cross.
“Everybody thinks Red Cross is just blood donations, but it’s not. It’s much more,” Greg Shea said.
The Sheas worked with Jennifer Capps, the executive director of the Red Cross’ South Central Kentucky chapter. Capps was volunteering in the restaurant on Saturday to help with the rush of customers.
The Red Cross teaches emergency preparedness and health and safety courses to the community. Its volunteers provide emergency response to all kinds of natural disasters, but primarily they target single-family house fires in the United States, Capps said.
“Hurricane Katrina and those types of events are so massive and so large-scale that you see the Red Cross presence in the media kind of constantly, but when it’s a single family fire, you know, it’s your own, it’s your own disaster.
“We have volunteers that will go out 24 hours a day and respond and kind of help them pick up their pieces, make sure they have a safe place to stay, that they have food to eat, that they have clothes to wear,” Capps said. “We kind of walk them through that process … as they begin that recovery and want to begin their new normal.”
Katrina survivor and New Orleans native Gwen Holmes found her way to Bowling Green and has been residing in town for the past four years—the same amount of time as the Sheas.
Holmes stayed in her home to ride out Katrina, but the storm left her family without electricity for three weeks. The family decided to head north when Hurricane Rita was on the way, and they resided in Memphis for several years. Work promotions propelled Holmes to Nashville and then to Bowling Green.
“I tell everybody it’s been a blessing. A lot of people went back. I didn’t and that was my choice,” Holmes said. “Many opportunities were open … I honestly don’t believe would’ve happened if I would’ve stayed. It just wasn’t there.”
Holmes dined at Tea Bayou on Katrina’s anniversary. She discovered the restaurant less than a month ago because her son mentioned its authentic Cajun cooking. She met Greg Shea at that first visit, and she said they have been friends ever since.
“I ordered a shrimp po’boy sandwich, and when it came out I said, ‘Oh this is the way I like my shrimp. This is the way I like everything.’ And he heard me and he came up to me,” Holmes said. “I think my accent took him away. He said, ‘Now I can talk like I want to and somebody will know what I’m saying.’”
Smiths Grove senior Candace Barbee, an employee at Tea Bayou since the spring, said they were really pleased with the event’s turnout. The restaurant had been doing a lot of promotions for the month via WBKO, D-93 and Facebook. Many people, both regulars and new faces, came through Tea Bayou’s doors.
“We’ve got a very unique customer base. They are the most loyal, sweet people and they put a smile on our face,” Barbee said. “We get people from out of town all the time that come in to try the authentic Cajun food, because a lot of people are from Louisiana or they really enjoy Cajun food, and they’re always so surprised at how authentic it is.”
With local art displayed on its walls, frequent specials, unique teas and consistently good food, it’s no wonder Tea Bayou is currently Trip Advisor’s No. 1 restaurant in Bowling Green. Without losing touch with their New Orleans roots, and while paying homage to the people who helped the city during some of its darkest hours, the Sheas are glad they ended up in Bowling Green four years ago.
“We love the community,” Shea said. “It’s a cool town.”
Delete Image
Align Left
Align Center
Align Right
Align Left
Align Center
Delete Heading