‘International Year Of’ to focus on South Africa 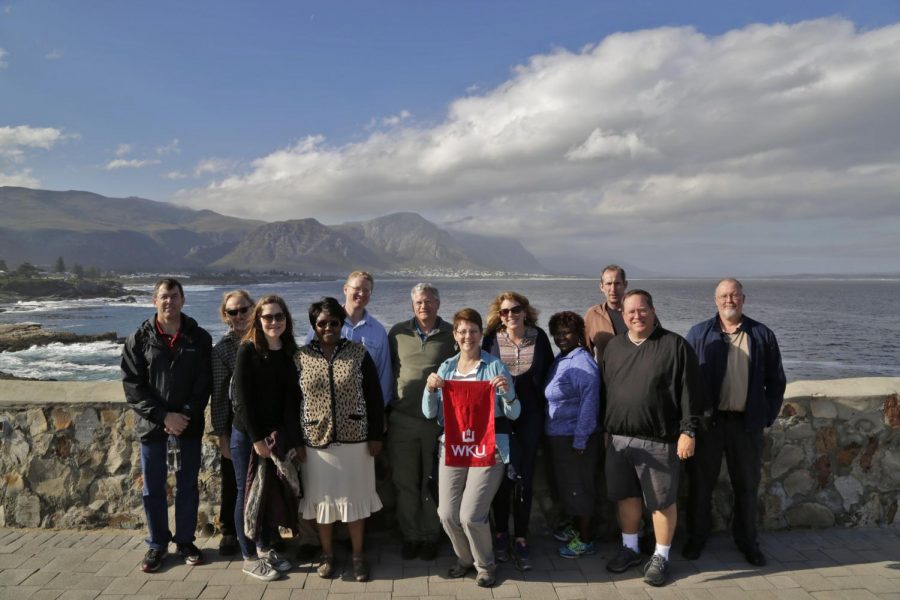 WKU faculty stand by the ocean in Hermanus, South Africa on May 24, 2015. The International Year Of ... (IYO) program is designed to provide the WKU campus and surrounding community with a rich, complex sense of place and interconnectedness through a year-long celebration and emphasis on a single country/region. The Zuheir Sofia Endowed International Faculty Seminar (ZSEIFS) is a key component of the IYO and is intended to enhance the overall objectives of the IYO through an intense interdisciplinary development opportunity for faculty centering on the region/country of focus.

The “International Year Of” series will continue its second year of cultural enhancement with South Africa as of the 2015-2016 country.

The “International Year Of” series selects countries based on university partnerships, study abroad opportunities and interests of the campus’ staff and faculty, according to Katherine Paschetto, programming coordinator in the Office of International Programs.

WKU aims to educate students, staff and faculty on how to be internationally connected and to apply it in their lives as well as in the classroom.

Students are thrilled South Africa is the focus of the “IYO” series this year.

Egbujor is a first-generation Nigerian student and treasurer of African Student Union. She believes the focus on South Africa will dispel negative perceptions people on the campus may have about Africa.

“I was hesitant to go to South Africa this past May,” Saundra Ardrey, associate professor and the political science department head, said. “When I was growing up Mandela was in jail and apartheid was a serious matter.”

Ardrey will be coordinating a study abroad trip to South Africa this school year.

This study abroad trip will help achieve her promise made during the Zuheir Sofia Endowed International Faculty Seminar (ZSEIFS) to implement her newfound knowledge into the campus community.

A group of ten professors applied and were chosen to participate in the ZSEIFS. Following the seminar, the professors travelled to South Africa for two and a half weeks in May to further their knowledge of the country.

ZSEIFS coincides with the “International Year Of” because the program requires faculty members to research the country, showcase presentations and explain how to implement their learnings in the classroom.

Ardrey and her counterparts studied South Africa for a year before they traveled there in May 2015.

“It was a great learning experience,” Ardrey said. “We’re always within our departments and the individual presentations taught me things about fish, biology, early childhood—just things I’d thought I’d never know,” she said.

Students can look forward to learning more about South Africa through the events the Office of International Programs has in order.

“Students can expect to discover South Africa in several ways this academic year—not only through a wide range of events, but also through their academic courses and in the community,” Paschetto said.

There will be over 40 classes offered with South African context this year, according to Paschetto.

In addition to professors enforcing what they’ve learned into the classroom, the starter event for the International Year of South Africa will be “Braai in the Bluegrass: A South African Barbeque.”

A Braai is a get-together and, in most circumstances, it’s a celebration for something.

“Braais are the cornerstone of South African culture,” Paschetto said.

“It’s very fitting that we celebrate the beginning of the International Year of South Africa with a Braai,” she said.

Ed. note: A previous version of this story stated that nine professors were selected to attend the ZSEIFS. The correct number is ten. This error has been corrected.