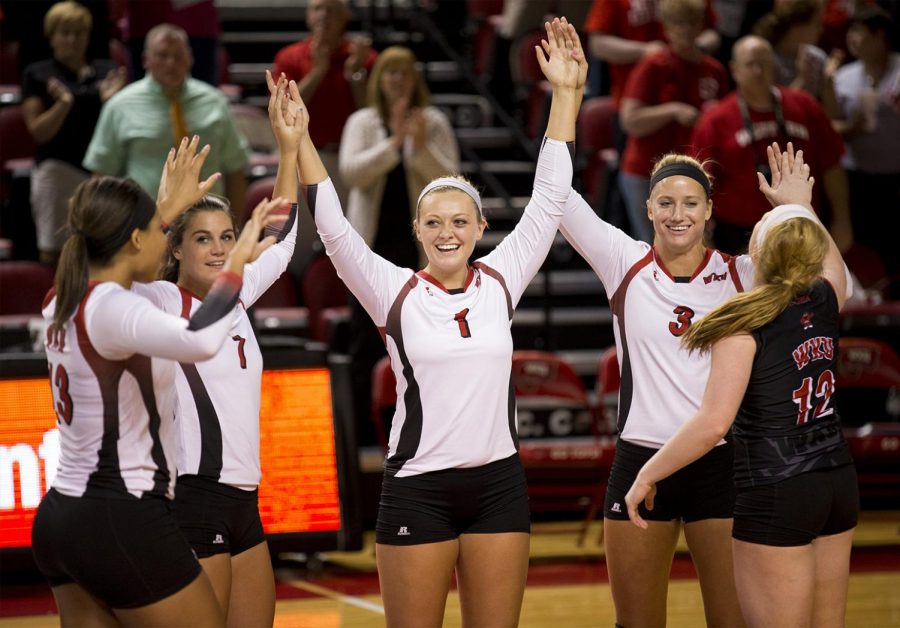 Jessica Lucas (1) and her teammates celebrate after they score a point during WKU's 3-0 win over Belmont Tuesday, Sept. 2, 2014, in E.A. Diddle Arena in Bowling Green, Ky.

In the realm of collegiate volleyball, the Wisconsin Badgers typically strike fear into the hearts of those on the other side of the net.

The perennial powerhouse program—it was a 2013 national runner-up—enters the season ranked fifth and will host the HotelRED Invitational this weekend. The Lady Toppers volleyball team, ranked 27th, will start its regular season when it clashes with the Badgers on Friday.

The Badgers present a big challenge to the Tops.

“There will be no weaknesses,” Head Coach Travis Hudson said of Wisconsin.

Hudson is familiar with Wisconsin’s coach, Kelly Sheffield. This won’t be the first time the two have faced off. When Sheffield was the head coach of the University of Dayton Flyers, he brought his 16th-ranked team to Diddle Arena and was upset by the Lady Tops.

The overall athleticism of the Badgers presents a challenge to WKU according to Hudson, and the Lady Toppers realize they have to bring their best game.

“We have to handle the ball very well on the first contact,” Hudson said. “We have to serve and pass well in order to get ahead.”

The Badgers have a talented and experienced lineup.

One player Hudson will be looking for is junior setter Lauren Carlini, 6’2″, the reigning Big Ten player of the year and setter of the year.

Carlini ranked second in the Big Ten and 20th nationally with 11.23 assists per set as a sophomore last season. She was a 2014 first team AVCA All-American and helped the Badgers set a new school record: a .275 team hitting percentage that ranked the team 9th in the nation.

Another key player for the Wisconsin team this year is 5’6″ senior libero Taylor Morey.

Morey was the 2014 Big Ten defensive player of the year, leading the Big Ten with 5.12 digs per set as a junior and ranking 29th nationally.  Taylor had double-digit digs in 32 matches last season.

The Lady Toppers have won at least 25 games in 13 straight seasons, tied with Penn State for the second longest streak in the nation.

The Program’s 121 wins over the past four seasons are second most in the nation behind only Penn State and ahead of powerhouse programs  Florida, Stanford and Texas.

WKU enters the season with some weapons of its own.

Sophomore outside hitter Alyssa Cavanaugh, 5’10″, is a 2014 AVCA All-American honorable mention after being named Conference USA freshman of the year after leading WKU with 411 kills.

Sophomore setter Jessica Lucas, 6’0″, was also a 2014 AVCA All-American honorable mention and ranked 42nd in the nation in assists per set with 10.88.

Cavanaugh and Lucas as a pair were named to the C-USA preseason all-conference team.

“I like our team a lot, I don’t think we have to rely on one kid, depending on how people defend us, I think we can kind of come at them from anywhere,” Hudson said. “It will be interesting to see what Wisconsin does against us defensively.”

Hudson said a key for success against Wisconsin as well as success during the rest of the season is Lucas growing into a more vocal leader.

“I really want Jessica Lucas to take control on the court a little bit more than she did last year. It’s time for her to do that,” Hudson said.

This will be one of the bigger venues the Toppers will play in this season. The Badgers will be unveiling the 2014 Big Ten Conference championship banner before the game, and the crowd, bringing even more pressure to the players, is expected to exceed 6,000 people.

The game is set to start at 7 p.m. in Madison, Wisconsin at the UW Field House.