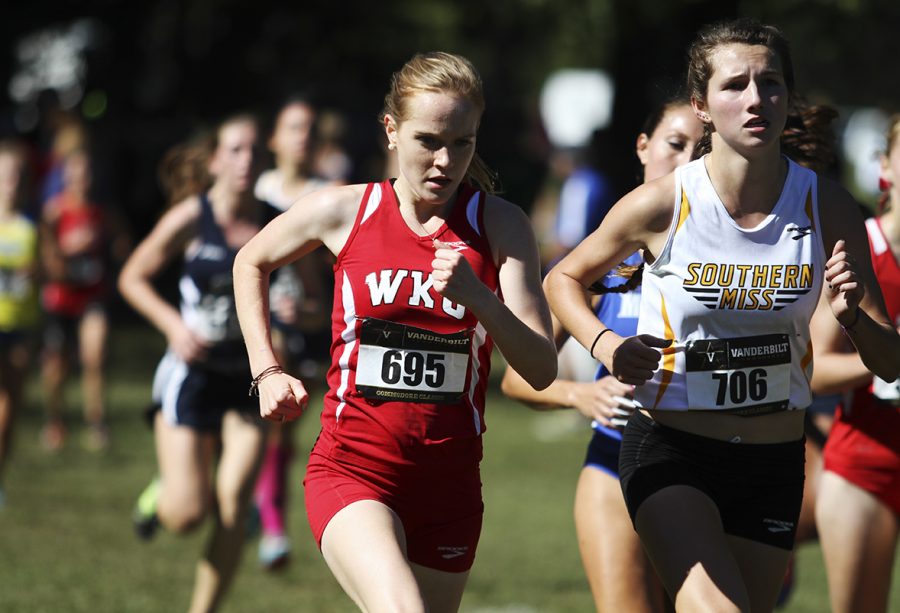 WKU sophomore Katie Lever competes against in Commadore Classic in Nashville. Lever would finish third for WKU and 46th overall with a time of 18:29.59 which was Lever's fast time of the season.

With a schedule that looks similar to 2014, the WKU cross country team will look to its new distance coach to help put a fresh spin on the upcoming season.

Head Coach Erik Jenkins said at the time of Palmer’s hiring that he was excited not only about Palmer’s success as a coach, but also about the environment he has been in and the recruiting aspects he brings to the program.

“He has been immersed in a highly successful environment and mentored by some of the most decorated distance coaches in the country,” Jenkins said in a press release. “His coaching skills are complemented by his ability to recruit domestically and internationally.”

But even more recently than that, Jenkins has said the level of energy Palmer brings to the program, coupled with his knowledge of the sport and experiences as an athlete, has brought something new to the team.

“He brings a lot of enthusiasm to the team. He is a guy that will work well with our staff and can recruit well. He understands the sport across the board and has an outstanding grasp on distance running since he was a distance runner himself,” Jenkins said. “He’s for sure a good fit for where we are and where we are trying to go.”

In Palmer’s time at Iowa State, he claimed two Big 12 and Midwest Regional titles and a runner-up finish at the 2014 NCAA Cross Country Championships.

Jenkins said there are many things the team is excited about for the upcoming season. One key event is the Conference USA Championships, which will be hosted in Bowling Green this year.

“Since most of the time we compete away it will be a great opportunity for our fans to get out and see our talent locally,” Jenkins said. “And we are really just looking forward to putting forth a good showing throughout the year.”

National championships will also be held semi-locally in Louisville, where the program has competed in the Greater Louisville Classic and the NCAA Southeast Regional in prior seasons.

Senior Lindsey Hinken was hampered with injury last season and received a medical redshirt because of it, but as a sophomore she was an All-Sun Belt Conference selection.

She finished second in the Sun Belt Conference championships and had the fastest time of any Lady Topper for the 2013 season.

“We expect to see a strong comeback from (Hinken) this season,” Jenkins said.

This season the men will have sophomore Takele Endalow, who will compete in his first cross country season.  Endalow has two years of indoor and outdoor track and field experience under his belt, and in the 2015 C-USA Track and Field Outdoor Championships he won the 10,000-meter and was runner-up in the 5,000-meter.

“We hope that (Endalow) can stay healthy and have a good year in cross country,” Jenkins said. “He’s our top guy runner and we think he can get it done.”

Senior Aaron Stevens will be another major contributor for the men’s team in 2015. Stevens was WKU’s No. 3 last season, but with former teammate Peter Agaba gone, Stevens has a chance to earn an even bigger role in the team.

According to Jenkins, the team hopes to go in the new season with a positive mindset: staying determined, humble and disciplined to achieve their goal of success.