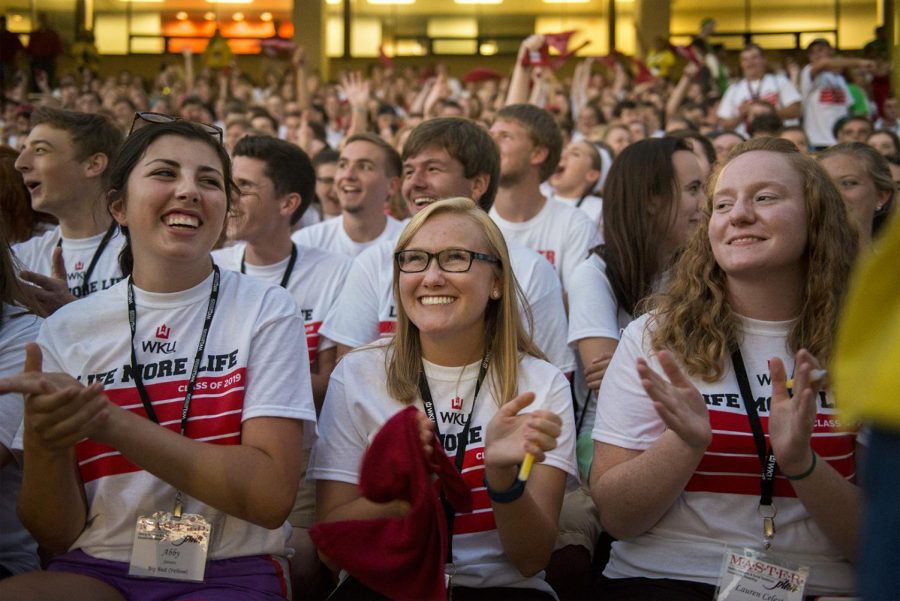 Unbroken glow sticks rest in the hands of a sea of freshmen who file into the home side of Houchens-Industries L.T. Smith Stadium. WKU cheerleaders, Topperettes, the marching band and Big Red himself line the field. They begin to cheer, dance and play their instruments as the freshmen class respond with their own cheers for M.A.S.T.E.R. Plan’s kickoff on Sunday, Aug. 16. They collectively wave their red towels for the first time, signifying that their years as Hilltoppers have begun.

Since 1993, M.A.S.T.E.R. Plan has been used to integrate incoming freshmen into campus life through both educational and social events.

Steve Briggs, assistant director for Housing and Residence Life, was at that first 1993 M.A.S.T.E.R. Plan as an administrator. He said it has been really neat to see the program evolve and advance over the years.

At the opening ceremony, students were divided into teams by color: red, orange, yellow, green, blue and purple. They screamed cheers for their respective team at the top of their lungs, trying to show more spirit than the other freshmen. The new Hilltoppers also jumped and cheered when each of their residence halls was called—proud of their new homes on the Hill.

When the cheering ceased, a mixture of nervousness and excitement flooded the faces of the crowd. Augusta, Kentucky native and freshman Felicia Thornsbury was a tad nervous, but mostly excited, to redefine herself in college.

“I’m actually thrilled to be able to start college life, to kind of just find who I am versus who people want me to be,” she said.

Another incoming freshman, Amelia Kolb from Louisville, had the “freshmen jitters” but was still eager to start class and find her place on campus.

Kolb said she is ready to begin studying Spanish at the collegiate level and take advantage of the opportunities provided by the Honors College and the Study Abroad and Global Learning program.

However, for Louisville freshman Kerstin Boyd, M.A.S.T.E.R. Plan did not settle all of her nerves.

“I decided to do M.A.S.T.E.R. Plan to step outside my comfort zone,” she said. “Coming to college is a very nerve-racking process.”

Richey encouraged them to make the most of their time on campus by choosing to have a positive attitude and surrounding themselves with a supportive group of friends who share similar interests.

President Ransdell welcomed the incoming class by telling them, “Be all in … This is your university,” reminding them to do what they came here to do—finish.

During the weekdays following the opening ceremony, students were guided by their resident assistants to educational sessions addressing a variety of college-level concerns, like roommate relationships, money management and campus safety.

Through out the evening, the class of 2019 were able to participate in a number of social events.

On Monday, during Big Reds Roar students traded in old university T-shirts for ones that displayed WKU’s letters.

Thursday closed with Meijer Mania, where students were shuttled off for free giveaways and live DJing at the new superstore. After the shopping adventures, R&B singer SoMo closed the week with his captivating performance in Diddle Arena.

Bradford Higdon, the department co-chair of the advisory board for Western Leaders and a Mt. Washington, Kentucky,  junior, is excited to see what the incoming freshman will accomplish at WKU.

“I think they’re going to be a great class. They’re all super, super pumped all the time,” he said.

-Marcel Mayo contributed to this report.