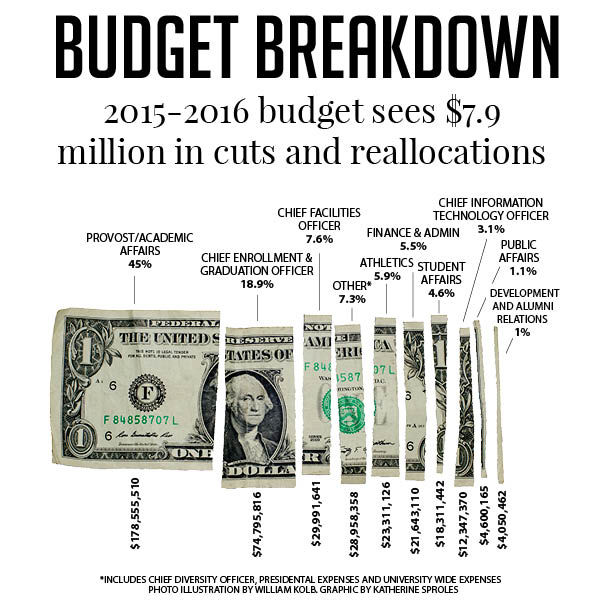 With state funding remaining stagnant, the Board of Regents approved the 2015-2016 fiscal year budget of $396.5 million, which included $7.9 million in budget cuts and reallocations.

In a meeting with the administrative council, President Gary Ransdell said he would not expect an increase in tuition beyond 3 percent next year. Over the past two years, tuition and fees have increased a total of 8 percent.

Although the university has significantly reduced spending since 2008, the lack of state funding furthers the need for continuing budget cuts.

“We’ve reduced our spending by some $30 million dollars since 2008 and that’s why we will be working so hard in Frankfort to get a higher education funding model actually funded,” said Ransdell.

Only 18.8 percent of the budget comes from the annual state appropriation, while close to half the budget, 49.2 percent or $195.2 million, comes from tuition and fees. The budget included an increase for WKU’s resident, undergraduate tuition and mandatory fees of $171 per semester, a total increase of 3.7 percent.

To balance the budget, the university cut or reallocated $7.9 million across all departments. One reason for the budget cut was an increase in awarding scholarships. The budget allotted money to expand scholarship offerings by $6.3 million.

Two years ago, the university moved from scholarship applications to awarding automatic scholarships.

“That proved to be a costly decision because 720 more scholarships were awarded,” Ransdell said.

To prevent the university from going over budget again, the class of 2020 will fill out an application for scholarships.

Of the $7.9 million, $5.5 million was cut from the office of Academic Affairs. Gordon Emslie, the former provost and vice president for academic affairs, eliminated 10 vacant faculty positions and one vacant staff position to free up $733,000 in staffing plan funds. Budgets for Navitas, the nursing assessment program, faculty search and accreditation reimbursement, the forensics program and more were reduced.

The Gatton Academy of Mathematics and Science received a state appropriation of $2 million to allow the enrollment in the Gatton Academy to increase from 120 to 200 students for fall of 2016.

In the budget, the university was unable to provide salary increases for faculty and staff. Faculty and staff have not received any significant salary raises since 2007. Moving forward and looking ahead to the next fiscal year, increasing salaries is a top priority, said Ransdell.

“There is no other priority in terms of revenue for next year,” he said. “We will have fixed cost increases we will have to cover as we do every year, but beyond that, absolutely salaries are the top priority. How will we be able to address them this coming spring when we put the budget together for the ’16-’17 academic year remains to be seen. We’re going to work very hard to try to enhance state funding, we’ll look at all options and all possibilities and everything’s on the table.”