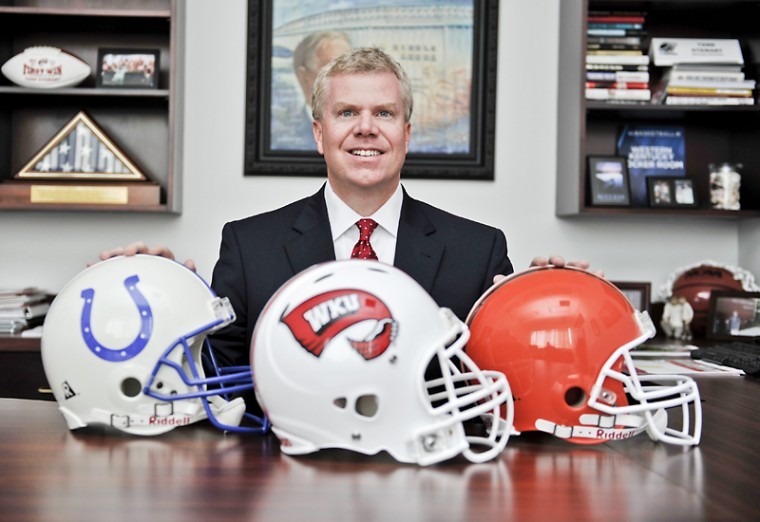 Todd Stewart was named WKU's Athletics Director in May 2012. Stewart previously worked for the Indianapolis Colts and Cleveland Browns.

The WKU men’s basketball program underwent something of an overhaul at the conclusion of last season, and as a result the team returns just five players from last season when they lost only three to graduation.

In addition to a massive roster shift, the coaching staff has also seen a shakeup, with Head Coach Ray Harper bringing in four new coaches at different assistant capacities to account for the departure of four assistants including Lawrence Brenneman.

Following a disappointing fifth place finish in the Conference USA last season, change was certainly called for—but to think that the WKU basketball program will enter the 2015-2016 season with only eight familiar faces from last season, combining the student-athletes and the coaching staff, leaves Hilltopper fans wondering what to expect.

And that is a completely legitimate question: No one knows what to expect from a coaching staff that has more new faces than old and a team roster in the same situation.

Yet Harper has shined before when put in difficult situations—a point Todd Stewart was quick to point out.

“When you take a broad view I think you have to take a look at where the program was when Ray Harper was hired back in January of 2011. We were in a tough spot—we were 6-11 at the time and we had 1,800 people at the last game that Ken McDonald was the head coach so that is what Ray Harper inherited,” Stewart said.

“In the three full seasons that we have had him as head coach he has won 20 or more games,” Stewart said. “There are only 45 programs in the country that have done that out of 350 and there is only one other school that has done that in the Conference USA.”

Harper knows, though, that the end result still isn’t what it needs to be.

“Certainly we have higher goals for our basketball program than what we have been able to achieve in the last few years and Ray will be the first to tell you that,” Stewart said. “Ray will certainly tell you we have higher goals than to finish fifth in the regular season—we want to make it to the NCAA tournament and advance. So that’s the goal and that’s what Ray is working to achieve.”

While the men’s team looks to rebrand Hilltopper basketball, the Lady Topper basketball program has one of the most statistically successful coaches in WKU history. If that success continues, Head Coach Michelle Clark-Heard will certainly be shown interest from other programs.

Stewart knows this, and while he says it is flattering to have other programs interested in your coaches, he wants to do everything he can to keep Clark-Heard on the Hill.

“If you look at it from a competitive standpoint, she inherited a program that had 21 losses.  This past year we won 30 games, and there have only been three teams in the history of Western Kentucky basketball, men’s or women’s, that have won 30 games,” Stewart said. “So that is what she has done and certainly we want to keep her here as long as we can so she can continue to build on that.”

So rather than rotating the coaching staff and figuring out what will work the best, as the men’s team has done this offseason, Stewart is focused on keeping the women’s staff together.

“She and I have a great working relationship, and she takes tremendous pride in being the head coach at her alma mater,” Stewart said. “It means a lot to her to be the head coach here.”

Stewart aims to raise the prestige of the program in an attempt to keep Clark-Heard at WKU for the long term.

“From what support we have been able to generate, we need to improve attendance there—that is not her fault certainly by any stretch or our players, we just need to get more people at the games,” Stewart said. “I think if we do that, than that’s the only piece that’s missing.”

Ed note: A previous version of this story misspelled one instance of the title “Head Coach.” This error has been corrected.