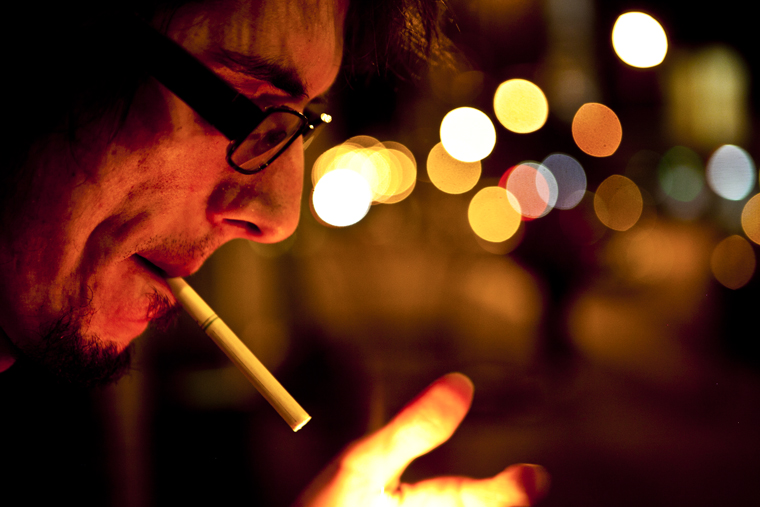 Scottsville senior Jack Rolett lights up a cigarette outside of his apartment. Rolett has been a smoker for five years. “You won’t quit until you really want to quit, and right now all of the risks of smoking are outweighed by my desire to smoke,” Rolett said.

The American Lung Association’s Freedom from Smoking program has found its way to WKU’s campus in an attempt to better the physical and financial lifestyle of the faculty and staff.

In a mass email sent to the entire faculty and staff, employees were invited to the Garrett Conference Center on Tuesday, July 7 to begin an eight-step program to address both the addictive and the habitual sides of cigarette smoking.

Of the roughly 10 participants in the program, reasons for quitting ranged far and wide: the cost of purchasing cigarettes, the health benefits that accompany quitting, social stigma/family pressure, and even premium rates on health insurances for tobacco users versus non-tobacco users.

Joyce Adkins, a health educator with the Barren River District Health Department said the key to the program versus quitting on your own centers on three pillars of addiction.

“It is important to realize there are multiple aspects of addiction,” Adkins said. “There is a physical—or biological side, which is the one most people are familiar with.  But there is also mental and social aspects of addiction that this program targets to give people who want to quit the best chance of quitting.”

Adkins leads the eight-step program in collaboration with Wade Pinkard, the manager of Employee Wellness at WKU.

“We are here to knock down any barriers that may stand in your way of quitting, whether they be financial or otherwise,” Pinkard said.

Another important aspect of the program—one that Adkins said greatly contributes to its overall success is the preparation that goes in before the participant even quits.

“Some people have the ability to just put (cigarettes) down one day and be done,” Adkins said. “But for others it is one of the most difficult behavioral changes to take on.”

Interestingly enough, the first half of the eight-step program is education regarding addiction, and preparation for “quit day.”

“Quit day,” is exactly what it sounds like, and does not occur until the fourth meeting of the program.  While the majority of the eight meetings take place on a weekly basis, session 4 (“quit day”) and session five are just 48 hours apart.

“You will notice that generally we meet once a week, but session five is just 48 hours after session four, so when you need the most support, the group will be here for you,” Adkins said.

The American Lung Association’s Freedom from Smoking program according to Adkins has become the “gold standard” of smoking cessation programs over the last 30 years.