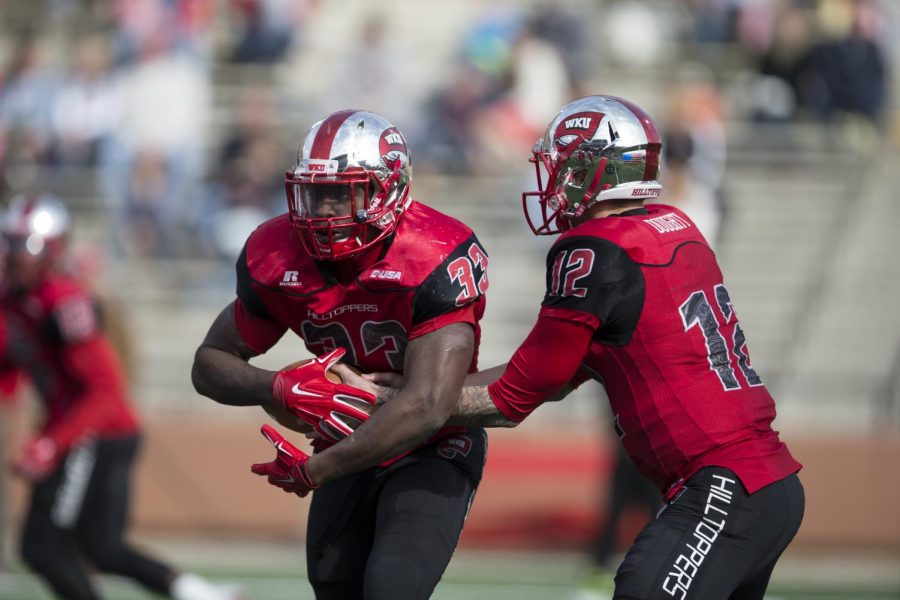 Quarterback Brandon Doughty hands the ball off to running back Leon Allen (33) during the first half of the WKU vs UTSA game on Nov. 22. Mike Clark/HERALD

Four WKU football players were named to the Preseason All-Conference USA Team the league announced Tuesday, July 14.  The following day WKU was picked as a preseason favorite to win the C-USA east division.

C-USA head coaches decide the preseason all-conference team, while a panel of media members that cover C-USA sports vote on the preseason favorites for each division.

The nod comes for Doughty after leading the nation in 2014 in passing yards and touchdowns with 4,830 and 49 respectively.

Dangerfield was also named Second Team All-Conference USA last season, earning the nod after nabbing 11 touchdowns off 69 receptions.  He was the primary target in a receiving core that contributed to the second ranked passing attack in the nation last season, and his 11 touchdown receptions ranked 13th nationally and second in the league.

Allen receives the honor after ranking third in the league and 18th nationally with 1,542 rushing yards, 750 of which came during WKU’s five-game winning streak to close out last season and punch the Hilltoppers’ way to their first FBS Bowl win.

While becoming WKU’s fifth-straight running back to surpass the 1,500-yard mark in a single season, Allen led the C-USA and ranked seventh nationally with 2,018 yards from scrimmage.

Doughty, Terry, Dangerfield, and Allen stand as four preseason all-conference selections on a team that, for the first time in its history, has been picked as a preseason conference favorite.

The Hilltoppers’ first test will be Vanderbilt in Nashville on September 3 before squaring off against west division preseason favorites Louisiana Tech in Bowling Green on September 10.