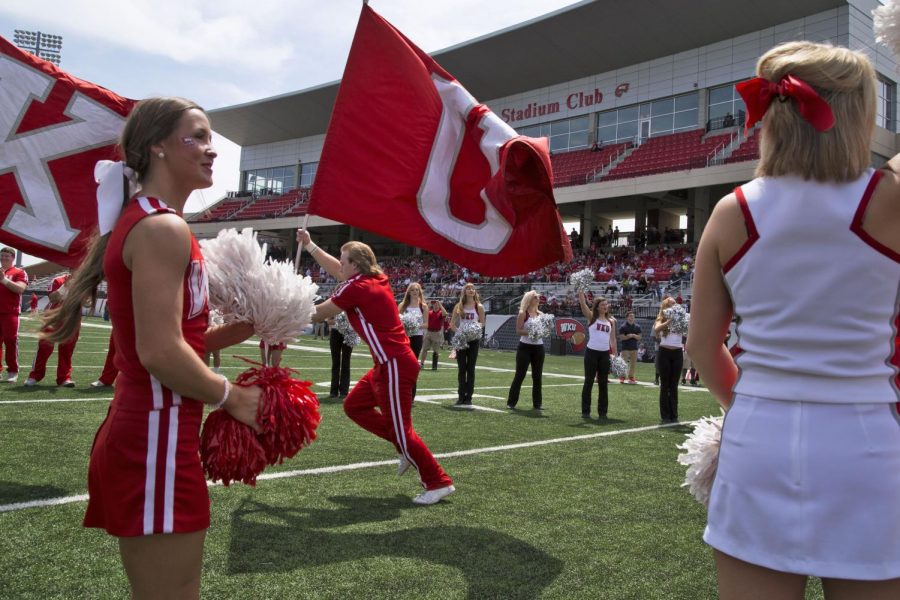 WKU cheerleaders lead the Hilltopper's onto the field before the start of WKU's Red vs. White spring football game Saturday, April 18, 2015, at Houchens Industries - L.T. Smith Stadium in Bowling Green, Ky. The Red vs. White game caps the end of five weeks of spring training for the Hilltopper's. The 2015 season begins September 5, 2015 when the Hilltopper's take on Vanderbilt in Nashville. Mike Clark/HERALD

Former South Florida quarterback Matt White has transferred to WKU as a rising junior, but will hold two seasons of eligibility left after sitting out this upcoming season due to NCAA transfer regulations.

After requesting release from his scholarship from the University, White said he had received interest from Southern Miss, Florida and Indiana—but after a weekend visit with his family and watching one of WKU’s spring scrimmage games, he verbally committed to head coach Jeff Brohm that evening.

White departs a three-man quarterback competition this spring at USF between himself, senior Steve Bench and sophomore Quinton Flowers. Though, NBC Sports reported no specific reason as to why White requested a transfer.

As a true freshman and sophomore, White played a combined 15 games.  He appeared in 11 games last season, starting 10 and threw for 1,639 yards and eight touchdowns with a 50.41 percent completion rate.

White told the BGDN that he was looking forward to learning under Brandon Doughty and Brohm, and also that he is happy he will not have the immediate pressure on him as he did his freshman season at USF.

White also said he recognized the starting job isn’t automatically his after this upcoming season.

White will not be eligible for competition this season, but will train with the team and fight for minutes in the 2016-2017 season.