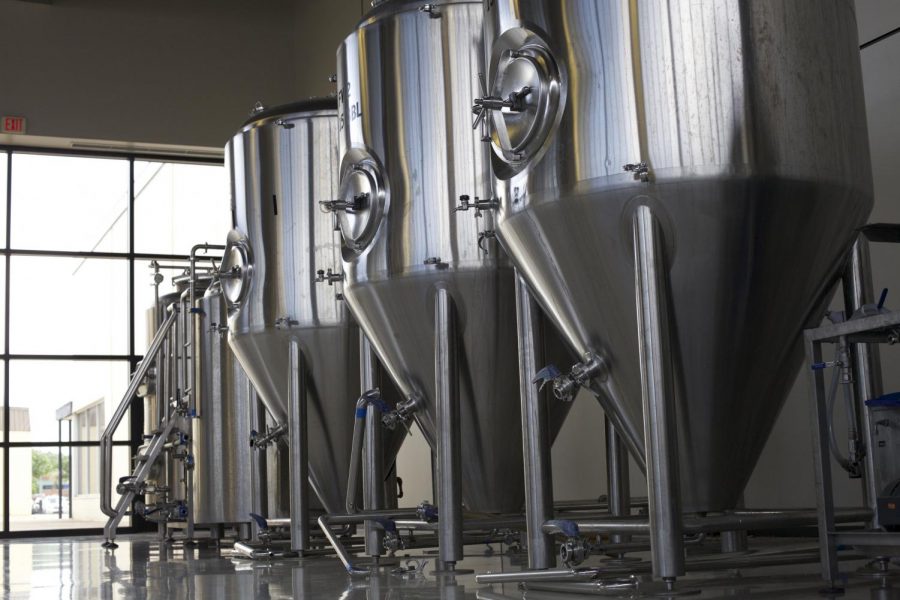 New Brewery equipment arrives at the WKU Center for Research and Development.

A collaboration between the Ogden College of Science & Engineering and the Potter College of Arts & Letters to implement a brewing-based major and minor program is already generating buzz across the country and beyond.

Dr. Andrew McMichael, Potter College’s assistant dean and an associate professor of history, has spearheaded the project with Dr. Cathleen Webb, professor and department head and associate dean for research in Ogden.

McMichael has already experienced firsthand the impact this project has had before it has even really taken flight.

“I was visiting a conference in Portland and I was in a bar talking to someone.  A guy behind me said ‘hey you are from Western Kentucky University, that’s where they are planning that program, that is so exciting—I hear two colleges are working together on this?’,” McMichael said. “I said yeah and he told me he had to hear all about it. I asked him where he was from and he said ‘I am from New Zealand.’”

McMichael said he was surprised the news had reached that far away.

But the journey to establishing the largest production facility on any American campus didn’t start when the equipment arrived this month.

McMichael had been personally been researching the idea for several years, but it was roughly a year ago that he and Dr. Webb decided to officially start developing an undergraduate major and minor program.

“So we went to different brewers around the state and simply asked what they would want to see on a transcript from a Western grad to hire them or to do an internship,” McMichael said. “Then we also asked them what they wish they would have known before they got in the business.

“What we heard was pretty much the same from all brewers — from little small brewers to the big ones,” McMichael said. “We heard basically ‘we wish we would have known a little bit of everything.’”

While varying responses were given to the two professors, a general consensus was reached that the brewers interviewed had felt their educational background was too narrow.

“We heard this repeatedly—and this is what Western does—we do broad-based degrees. We are liberal arts education,” McMichael said. “So we started putting together some courses and ideas on how to do a major or minor and a certificate.”

Over the course of the interviews that Dr. McMichael and Dr. Webb conducted, one specifically was run with employees at Lexington-based brewing and distilling company Alltech.

Alltech showed a heightened interest in the project that other interviewed parties did not—an interest in education and how to educate brewers.

“The equipment will be run by Alltech, and they are not selling beer here which is very important to note,” McMichael said. “They will not be selling beer on campus because (WKU) already has their contract with Aramark and I just don’t know that our campus is ready for a brew pub on campus.”

McMichael said that if the beer created at the facility were to be sold on WKU’s campus, it would be through Aramark, but no plans have been made to do so thus far in the project.

McMichael anticipates the beer to be sold at local grocery stores and markets.

“(Alltech) will run (the facility), we will not have to hire any staff or pay for any component of this, so this for us it is not costing any money,” McMichael said. “In fact, Alltech is leasing this space from us.  They will run it, their people, their brewers.”

A handful of other colleges have similar programs implemented—McMichael estimates roughly a dozen, but says that several aspects of this project sets WKU’s apart from the rest.

“If you look around the country, they are all chemistry degrees, or agriculture degrees, or fermentation degrees—it is all science degrees.  Also its like 70 credits, 80 credits…the exact opposite of what we were being told. So we are coming into a growth area in education by starting this differently based on the feedback we got.

“Really for us this is more about meeting the needs of the job market much more than ‘here is how we think it should be’,” McMichael said.

The program being designed at WKU will require 30-credit hours, if accepted by the university.  The program will be presented to the WKU academic administration this fall for approval.

With the requirement of just 30 hours, active students will be required to pursue a second major or minor, which McMichael said is the basic idea behind the design.

“Really what we are thinking is if someone is a business major and they say they want to own a brewery but not do the hands on, they take this as a second degree and when they go out on the job market they have this degree,” McMichael said. “Maybe they are a chemistry major that wants to be a hands-on brewer; they take this degree and they have that experience.  It is really intended to give a lot of flexibility to students as a second major or minor and have that certificate.”

In a growing industry that currently revolves educationally around science courses, WKU is making strides to change the landscape of brewing to better cater to the needs of the student.

“The other unique thing about this that we aren’t seeing from any of the other colleges is this will involve classes from three… four… maybe five colleges on campus,” McMichael said. “When we talk with professors from other colleges, they say ‘wow, the humanities and science colleges are working together on something? This is going to be interesting’.”

This collaboration, McMichael said, is paramount to the success of the program.

“That close collaboration between our colleges and the way we are trying to design this with a really broad education is already causing people in the industry to wonder what is going on at Western, so that is really cool,” McMichael said.