New building for College of Business on the horizon 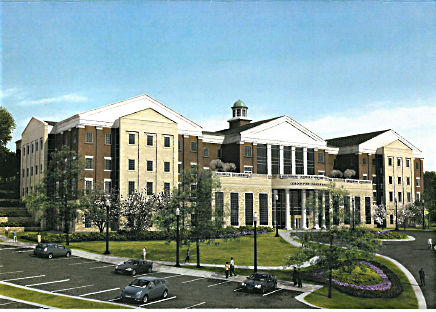 A new building for the Gordon Ford College of Business is one step closer to completion.

Last week, the Board of Regents were given architectural renderings of what the finished business building would look like.

Constructing the College of Business is a four-part process, President Gary Ransdell said. First, parking must be built between Adams and Kentucky Streets to accommodate for displaced parking as the building begins construction. Once the facility is completed, classes and offices currently located in Grise Hall will move into the new building.

Grise will then be renovated into a mid campus general building for multiple types of courses.

The final step in the process is moving those remaining classes in Tate Page Hall into Grise, tearing Tate Page down, and expanding the South Lawn.

“And all that is why it’s a $97 million project,” said Ransdell.

The project in its entirety currently holds the top priority on the university’s six-year capital plan, which was approved by the Board on March 30.

“I believe the new College of Business would be a great asset to our university,” Richey said in his post. “If an overwhelming percentage [of funding] comes from the state and other sources without a primary option being an increase in student tuition or fees on students, then I will support its construction.”

Ransdell said it’s too early to speculate how much the state will give WKU’s capital projects, but the university will fight for everything it could get.

“We are absolutely screaming at the state to return higher education to a funding priority,” he said.