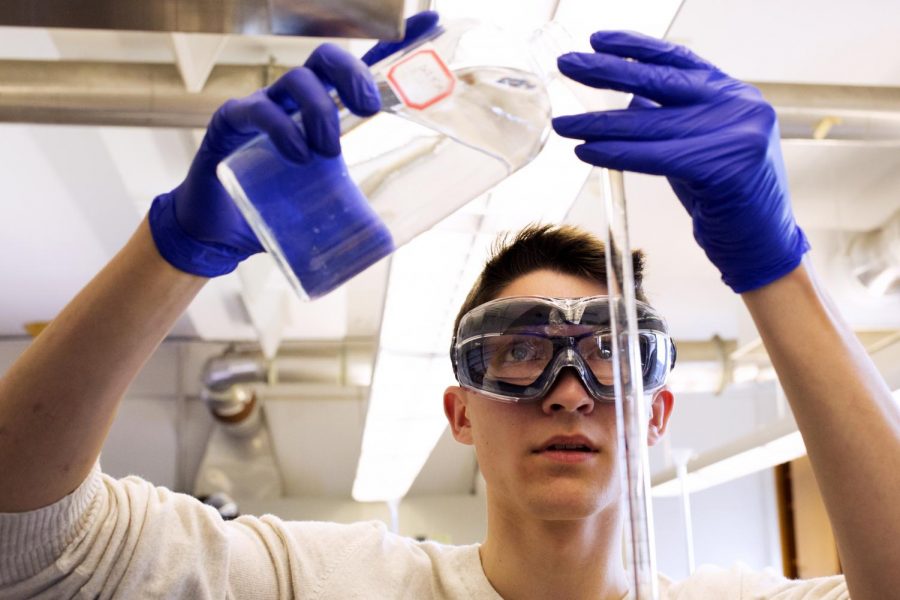 Henderson native, Joseph Crafton, measures out chemicals in his Quantitative Analysis class at Thompson Complex Center Wing on Tuesday Feb. 25. Crafton is in his final semester at the Gatton Academy and hopes to study chemistry at Vanderbilt after graduation. "I don't mind being labeled a Gatton kid," Crafton said. "No one asks most of the time. I usually fit right in." After college and grad school, Crafton's ultimate goal is to become a trauma surgeon. (Luke Franke/HERALD)

The WKU students contributed to a report published in the April 28 issue of eLife.

“The goal is to understand how various viruses present in the environment are different or alike to each other,” WKU biology professor Dr. Rodney King said. “Students go out in the environment and take a soil sample or a water sample—they recover these and they purify them and then they characterize them.”

The study compared a total of 627 bacteriophages isolated from a single species of bacteria.  The students then compare the differences and similarities in genetic sequences between the bacteriophages—also studying how the host of that bacteriophage affects it.

In total WKU contributed 11 bacteriophages that they discovered and characterized. The Science Education Alliance’s overarching project includes 2,664 students and 199 faculty members across 81 institutions.

At WKU, the project is split into two semesters, the first of which includes a course titled Genome Discovery and Exploration in which students collect their sample from the environment.  The second semester includes a course titled Bioinformatics in which the students ultimately produce annotated genomes of completely unknown viruses, which are added to the national DNA sequence database.

WKU has been involved with the project through the Howard Hughes Medical Institute since 2009.  Most recently, Dr. King and Dr. Claire Rinehart received a grant worth roughly $150,000 that includes a technician that will help with DNA sequencing as well as Bioinformatics specialist that will help with the annotation of that sequencing.

This roughly $150,000 grant is not solely in the possession of WKU, and over the course of five years will be spread amongst 15 other Kentucky universities that will embark on the same project.

“In this project that we are involved in we primarily target freshman and sophomore because we want to get them interested in research at the earliest possible stage,” Dr. King said.

“The idea is to support these schools with supplies and giving them support in terms of technical support as well as how to get this project rolling in the classroom,” Dr. King said.

The impact of this research could carry large implications in the medical field.

Dr. King said that with so many new genomes being discovered not only by WKU students but also through the overarching project as a while, the hope is that maybe a few will offer important information in combatting similar viruses.

The network of Kentucky schools involved in the project is expected to add five new schools next fall, and then five more school in the fall of 2016.