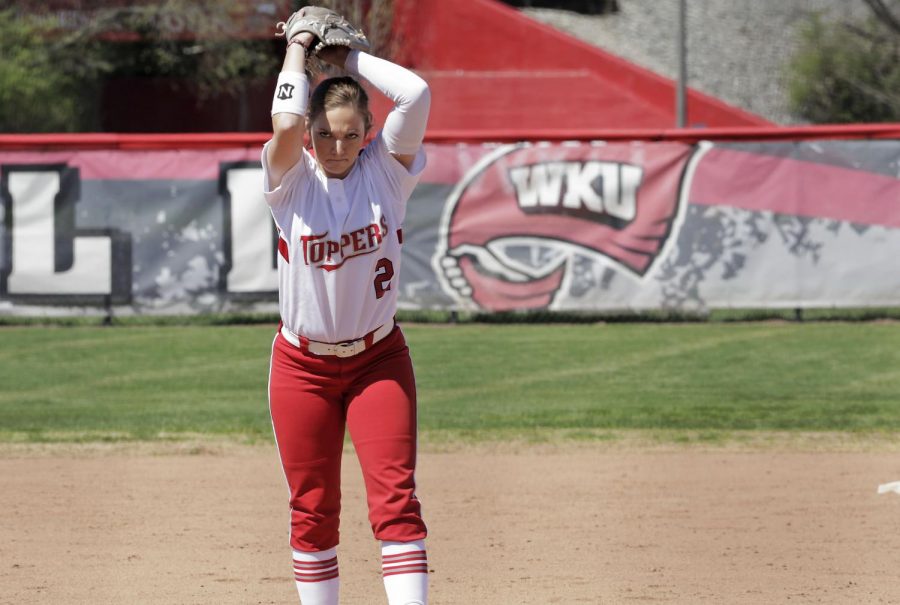 WKU softball (34-12) took home the Conference USA Tournament title this weekend after beating No. 2 ranked Florida Atlantic at 3-1. This season was the Lady Toppers’ first competing in C-USA and this win is their first overall in WKU history.

The road to the tournament title began on Thursday, May 7, when WKU played against Charlotte in the championship opener and won 1-0. This was the Lady Toppers’ first-ever perfect game thrown by senior pitcher Miranda Kramer.

WKU’s Preslie Cruce scored the team’s only and winning run of the game from second base. Cruce made it home thanks to Hannah Parker’s hit down the left field line.

The win against Charlotte advanced WKU to the next game on Friday, April 8 against No. 4 ranked team, UAB (32-19). Kramer struck out 15 batters during this game. She allowed two hits total in the second inning.

Lady Toppers took the victory with a 3-1 win. Freshman Carleigh Chaumont and sophomore Kathryn Downing notched two hits and an RBI each, adding to WKU’s total of six hits in the game.

Three runs came in during the first inning against UAB. Chaumont brought in the final run of the game during the fourth inning due to an RBI single by Downing.

The third and final game of the conference tournament was played against Florida Atlantic. The game started at 11:00 a.m. on Saturday, April 9.

WKU and FAU were held in a stalemate with the score at 1-1 until the sixth inning. At the bottom of the sixth, Kayti Hanson and Cruce were on the base when Chaumont came up to bat.

Chaumont hit an RBI double that shot Hanson and Cruce home for the two final runs that would secure the game 3-1 and tournament title for the Lady Toppers.

With one inning left, Kramer (24-8) threw a perfect inning. Kramer struck out 13 FIU batters in the seven innings pitched and allowed only three walks and one run.

Kramer has broken several records this season and pitching at the Conference USA Tournament was no different for her. She broke the C-USA tournament strikeout record during Saturday’s game after her 34th strikeout of the three games.

WKU’s Tournament win earn them an automatic trip to the NCAA Division I Softball Championship. This will be their second time to an NCAA Regional since earning a bid in 2013.