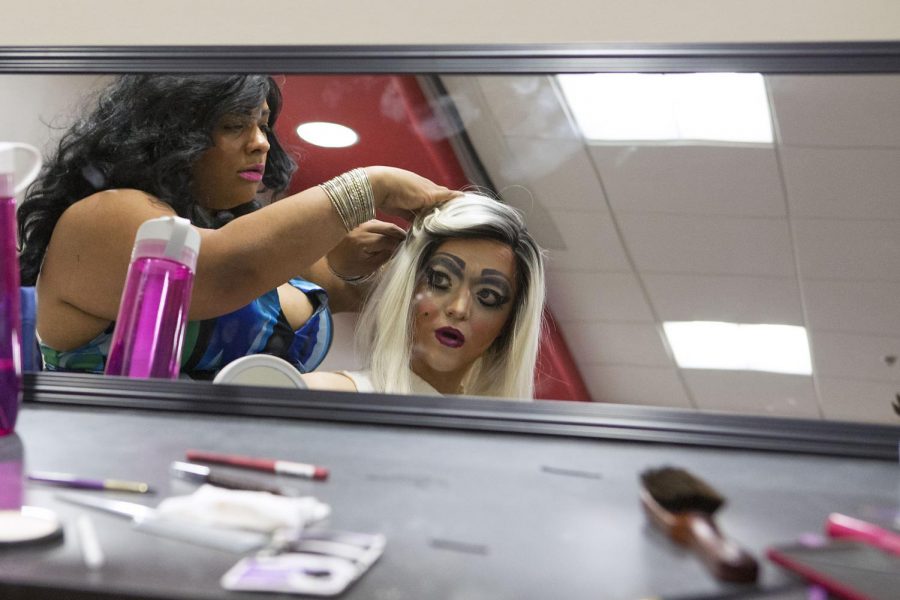 Summerset junior Jarred Johnson has his hair pinned by Briana Black before performing as Coal in the Drag Show hosted by Residence and Housing Life Saturday, April 25, 2015, in the Downing Student Union. Johnson said he was inspired to perform in drag by watching RuPaul's Drag Race. Mike Clark/HERALD

Rows of chairs filled Downing Student Union’s third floor room 3024. Silver stars and red streamers hung from a black backdrop at the back of the stage.

Multicolored lights flooded the room, lighting fragments of faces as people filed into the space.

About 200 people packed into the room on Saturday for one reason: a drag show.

The drag show, hosted by Housing and Residence Life, boasted performers of all types and skill sets. Some queens like Venus Knight were seasoned professionals.

Knight, a Bowling Green native and WKU graduate, said she sees every opportunity and experience as a chance to learn and that one can never learn enough.

“I want to be like the Princess Diana of female impersonation,” Knight said.

Knight said as she continues to learn and grow as a performer she is beginning to look towards national level pageants. While she used to say she wanted to “make it big,” that’s no longer the case. Knight said she believes that all people deserve to be loved and becoming a nationally known performer would allow her to reach out to more individuals.

“When I’m on stage I enjoy seeing the smiles, hearing everyone and knowing they’re enjoying what I’m doing and that means a lot to me,” she said.

Other queens celebrated their ‘birthdays’ with that night’s performance.

Somerset junior Jarred Johnson performed drag for the first time that night as Coal. Johnson went on stage in white platform shoes and intricate makeup as he danced to “You Know You Like It.”

Coal was an Appalachian girl from Somerset, but her family is from farther eastern Kentucky, Johnson said.

“Appalachia doesn’t seem to have very many queer people, but they actually exist there, so I’m just giving it a little bit of a platform,” Johnson said.

Johnson also believed performing drag has its own statements about what it means to be part of the LGBTQ community. He said people rarely credit the diversity of drag performers.

Assistant director for HRL Blair Jensen said it was a great opportunity to honor the performers and give them a space to express themselves.

“Overall, I think it was a huge success and definitely looking forward to hosting it again next year,” Jensen said.

The show wasn’t only a fun event. Attendees received pamphlets about drag culture and etiquette prior to the show.

Knight said there are a lot of misconceptions about the culture surrounding drag and many of them are typically untrue.

“There are so many stereotypes about our culture and honestly a lot of ignorance as well,” Knight said.

Drag queens weren’t the only types of performers. Drag kings held their own in unique performances.

Allison Call, sophomore from Staten Island, New York, became Justin Case for the night. Call took to the stage resembling teenage heartthrob Justin Bieber performing the song “Fall,” which is by Bieber. HRL’s show was not the first time for her to perform. She said for her doing drag involves a lot of energy and feeding off the crowd a lot.

“I really like, number one, the diversity of the people that come because you think it’s just going to be gay people, but it turns out to be a lot of straight people, because drag shows are not separated and set apart as you would think,” Call said.

“I loved it. It was fabulous,” Shaw said.

Knight said she hopes when all of the performers were up on stage, the audience looked past whatever stereotypes they had.

“I hope when they see me tonight and the other girls they see we’re just like anyone else,” Knight said.