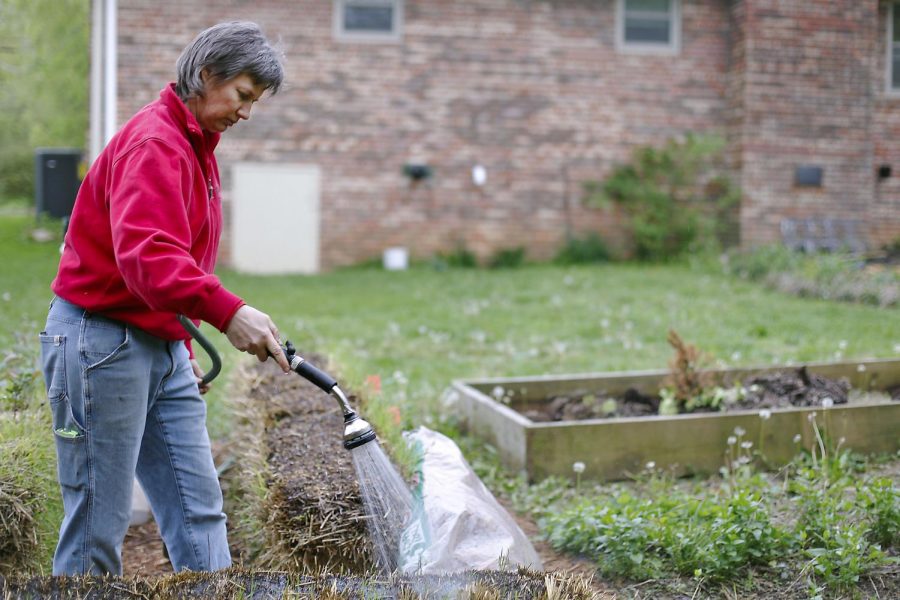 Jennifer Tougas, Parking and Transportation Director at WKU, waters a straw bale garden in her backyard in Bowling Green on April 21, 2015. The straw bale is used as compost material, when she adds water and nitrogen it is called blood meal and helps the decomposition process of the straw. Later in the season Tougas will need to add phosphorous and potassium. In her backyard there is also a hugel and a raise bed. "I've enjoyed gardening," explains Tougas. She contributes to Richards and Manco Farm (R&M) whenever she can help out. Erica Lafser/HERALD

When Jennifer Tougas, director of Parking and Transportation Services, is not tending to parking space losses and parking structure possibilities, she tends to fresh crops at a local family-owned farm.

“As a local farmer, we’re contributing to a sustainable food network,” she said. “We’re a small part of the bigger picture of food security, and that’s pretty important.”

Tougas said she connected with the farm through family friends.

She works evenings and weekends to cultivate the herbs and crops, and she also helps set up and sell the products on Saturdays at the Community Farmers Market on Nashville Road. She said she’s able to invest more time there in the summer when she works less hours at WKU.

James Manco’s daughter Madonna Manco May, who is a full-time nontraditional senior at WKU and student worker in the Sustainability Office, works on the farm as well.

Manco May said Tougas is a huge help, especially with her degree in biology.

“When you have a farm, you need help,” she said. “[Tougas] has really taken off with reading up on things and helping us produce more things for our farm.”

James Manco said he grew up on a farm, but began farming full time in 1999 when he retired from his other job.

Manco May said her family decided to begin farming to teach the practice to her kids, who are now 11 and 19 years old.

“When my dad inherited the farm from our grandparents, my dad wanted the grandkids to learn to farm,” she said. “We were doing it to teach my kids how to be able to grow and make it on their own if something ever did happen.”

Tougas said local farming is important, because it is necessary for our nation to have a diverse food network in case of a disaster.

She used the current drought in California, where much of our nation’s food is produced, as an example.

“If we have all our eggs in one basket, we’re in trouble,” she said.

She said it’s rewarding when customers return to the Community Farmers Market and rave about the food they purchased.

However, she said the weather this Spring proved an obstacle for all the members of the markets.

“The weather has been a hindrance for all the farmers lately,” she said. “It’s just too wet to till the ground.”

Tougas said April is also early in the growing season, so the farm is currently selling only vegetable plants, herbs and flowers. She said as the season progresses, they will produce an assortment of vegetables including peas, garlic, onions, spinach, squash, zucchini, potatoes, green beans and peppers.

Manco May said the “sweat and the labor” involved with owning a small family farm is a hardship.

“It’s difficult to be on your knees day in and day out,” she said.

She said despite the physical difficulty, it’s ultimately rewarding to hear the positive remarks of customers about her products.

In contrast, James Manco finds joy in the hard work.

“It’s rewarding just working at the farm with the vegetables,” he said. “It’s amazing to see the produce off just a small half-acre of land,” he said.