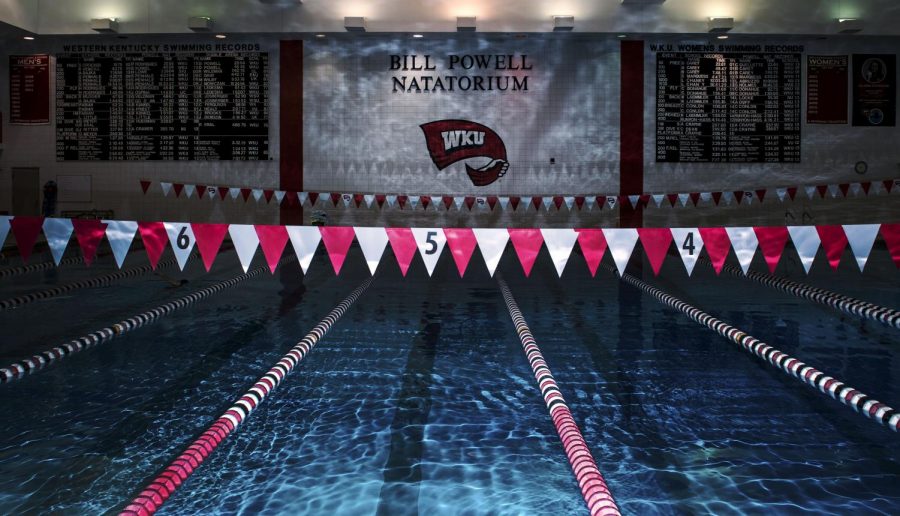 The Bill Powell Natatorium will no longer be called home by the more than 50 student athletes of WKU's Men's and Women's Swimming and Diving programs after President Gary Ransdell and Athletic Director Todd Stewart announced on Tuesday, April 14, 2015 that the programs will be suspended for the next five years effective immediately. This comes after a former swim team member, Collin Craig, filed complaints with the Bowling Green Police Department on January 6, 2015, sparking an investigation by both police and WKU Title IX coordinators. Nick Wagner/HERALD

After half a century of constructing their programs, WKU’s Swimming and Diving teams are no more.

The university announced Tuesday morning both the men’s and women’s teams are suspended for five years.

Athletic Director Todd Stewart and President Gary Ransdell met with the teams to deliver the news in-person before issuing a formal press release explaining the decision.

“We will always act in the best interest of the university and we simply must insure that our standards are respected,” Ransdell said in an interview. “A great university program stepped over the line and we had to deal with it.”

He expounded upon those statements in an email to faculty and staff.

“When students choose to participate in a formally recognized WKU organization, regardless of the nature of that organization, they become responsible for their actions, both as individuals and as a group,” Ransdell said in the email. “This University simply will not tolerate indecent, immoral, physical, or mental acts of disrespect or abuse among our students. We must all embrace a culture where every student is as important as any student.”

Stewart said it was “a very difficult and unfortunate decision on many levels.”

“While many in the program have represented WKU with distinction, the overall findings of a consistent pattern of disappointing conduct is troubling and not acceptable at WKU,” he said in the press release.

The announcement came after investigations by the Bowling Green Police Department and WKU’s Title IX office found that the teams broke multiple of WKU’s policies on hazing, sexual harassment and sexual assault.

Collin Craig, a former swim team member, filed a 10-page complaint to BGPD on Jan. 6, alleging that the swim team hazed him throughout the fall semester. In the complaint, he stated the swim team forced him to consume alcohol, wrestle and calisthenics (referred to as the “freshman fuck around” in the complaint) and clean the “party house”, which was alleged to be 1303 Chestnut Street.

“I became increasingly depressed and disillusioned as the fall semester continued,” the report said.

Craig stated any problems were only to be reported to the swim team.

“All members of the team, including the coaching staff, are constantly reinforcing that everything needs to be kept secret and that we are not allowed to stray outside the team for any reason,” he wrote. “To date, I do not recall being given training, lecture or a policy statement from WKU’s staff describing hazing, its policies or reporting procedures.”

Positions for Head Coach Bruce Marchionda, Associate Head Coach Brian Thomas and Head Diving Coach Chelsea Ale will be eliminated June 30. The Title IX report obtained through an open records request with the university found that Marchionda knew about the incidences since spring of 2012.

At press time, only one former swim team member has received charges. Ronnie Ward, public information officer for BGPD, said Overland Park, Kansas senior Seth Musser, has been charged with possession of drug paraphernalia and  possession of marijuana as a result of the evidence collected during the search and seizure.

The Herald reached out to other members of the men’s team and received no response.

Bill Powell, who coached the swim team from 1969 to 2005, said he received “a couple hundred” of reactions from alumni.

“As a teacher I was never one for disciplining a whole class for the actions of one or two students. Nor would I discipline an entire team for the actions of one or two athletes,” Powell wrote on the WKU Hilltopper Swimming and Diving Facebook page. “In this case more than 50 innocent, hardworking students are receiving a devastating punishment for something for which they are not responsible.”

For members of the women’s team and the diving team, the decision came as a complete shock.

Former diver Savannah Neddo came to WKU after competing on the Canadian national team. The freshman photojournalism major said WKU offered the two things she wanted to pursue most.

“It’s so hard to pick now between my athletic career and academic career… I was shocked and disappointed,” she said. “Everyone started crying, it was so emotional.”

Going into the meeting, Neddo understood the punishments to be on the men’s team. The blow to all teams was a “shock,” she said.

“The girls had no idea,” she said. “We always thought it was about the men’s team. We’d always been reassured we weren’t involved. Todd Stewart never said anything about the women’s team or us.”

The Lincoln, Nebraska native —who just set the university record in the 1650 free —said athletes were told to skip class for the meeting and that triggered a red flag.

“All of us were kind of expecting to have some form of punishment but not this extent,” she said. “I was blind-sighted.”

Like Neddo, McNeel said she had no idea the women’s team was up for suspension.

“I said that to him [Todd Stewart] in the meeting… We were never aware the team was being investigated,” she said. “None of the women were investigated, but there were countless men’s teams meeting to tell them what was going on. We weren’t involved.”

McNeel said she thought the actions had been made worse than what happened.

“The hardest part for me is just that I’m going to lose some of my best friends,” she said. “We all kind of just are going to be separated now. It’s like my family here, and it’s really hurting… I got a bunch of different offers to swim and I wanted to come here.”

Swim and dive team members will be allowed to transfer to another institution. Team members with scholarships who choose to stay at WKU will have their scholarships honored provided they remain in good academic and university standing.

However, for freshman divers like Neddo, suspending the team prohibits performance-based scholarship gains.

“I would’ve gotten more scholarships because of my performance this year,” she said. “You go up based on performance and now I won’t. It’s tough to stay based on what I’m getting offered.”

Neddo said leaving the university would be the most viable option for her, and she’s not done diving.