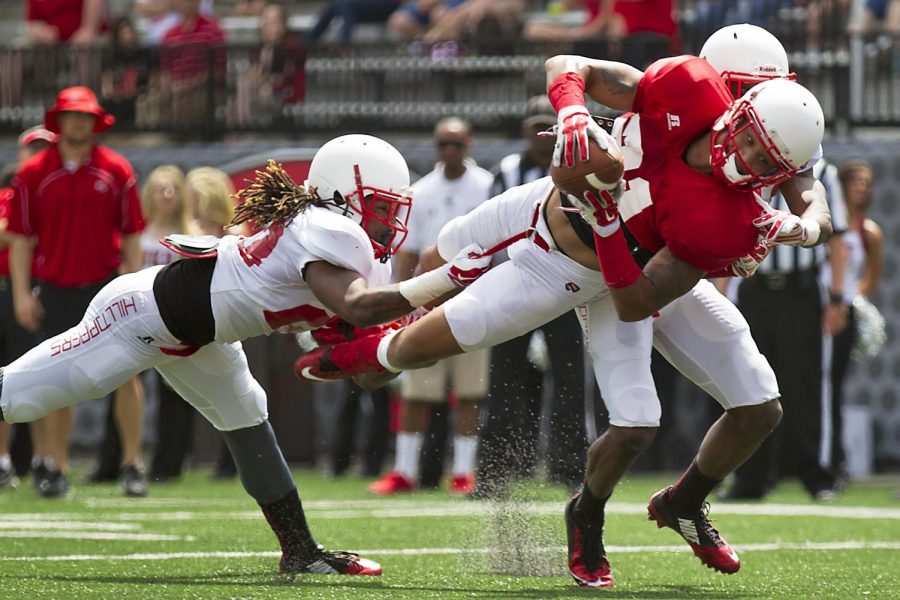 WKU's wide receiver Jared Dangerfield (21) dives past cornerback De'Andre Simmons (23) towards the goal line during WKU's Red vs. White spring football game Saturday, April 18, 2015, at Houchens Industries - L.T. Smith Stadium in Bowling Green, Ky. Dangerfield was ruled down at the one yard line. The Red vs. White game caps the end of five weeks of spring training for the Hilltopper's. The 2015 season begins September 5, 2015 when the Hilltopper's take on Vanderbilt in Nashville. MIKE CLARK/HERALD

The Red squad, made up of all offensive players, pulled away with the 52-40 victory, but stellar play by the first team defense and shown improvement on both sides of the ball gave Head Coach Jeff Brohm and the WKU football team several positives to end the spring season.

“I think our guys worked hard, came out, had some enthusiasm and played hard,” Brohm said. “We got some things accomplished this spring. I think we got better on the defensive side of the ball, which is good to see. Our guys are more experienced. We are doing a better job coaching and putting them in better positions to succeed, and our guys are responding. I like some of the things we did, and we have to build upon that.”

The WKU defense, the White squad, made a statement early by stopping the offense on the first three drives of the first half.

They went on to total two turnovers, three defensive stops, one turnover on downs and one three-and-out in the first nine drives, taking a 17-7 lead early in the first half.

Senior quarterback Brandon Doughty found his groove on the fourth drive of the game, hooking up with redshirt-senior Jared Dangerfield for a 34-yard gain. On the same drive, Doughty heaved a 44-yard touchdown pass to redshirt-senior tight end Tyler Higbee.

Doughty also punched in a 1 yard touchdown off a QB sneak in the first half.

In total, their were 72 points scored in the first half with the Red team leading at 45-27.

The offense, after struggling to go the length of the field, began the final six drives of the half on the White team’s 30-yard line. The offense proved a red zone presence by scoring on five of those drives.

“I’m really excited about what they (defense) are doing,” Doughty said. “How they’re moving, how they’re communicating— it’s unbelievable. So I’m excited for them.”

“We came to play,” senior defensive lineman Jontavious Morris said. “We had a good day. We were jumping on both sides of the ball. Little arguments— all out of fun. I loved it.”

The defense began the second half as well as they started the first, scoring eight unanswered points, and forcing two three-and-outs on the first two drives of the half.

Sophomore wide receiver Narcarius Fant and freshman running back Marquez Trigg showed off some of WKU’s younger talent this season, helping the offense respond on the fourth drive of the half.

Redshirt-freshman quarterback Drew Eckels found Fant for a 14-yard touchdown pass to put the Red team up 52-35. After the drive, an interception ended the 2015 spring game.

The game marked the end of spring football on the hill, with the last five weeks of practice and strength conditioning culminating in Saturday’s game. The first WKU football game of the year was met with a sizable crowd, one that the coaches said they were very grateful to have.

“I thought it was a great crowd,” Brohm said. “They were into the game, and we enjoyed having them here. We love the support they have here, and it’s up to us to go out there and put a good product on the field and to work our tails off to try and win games and a championship.”

“There is a lot of work ahead of us but to have the fans here, that’s what it’s all about.”

Doughty, who enters the season after being granted a sixth year of eligibility by the NCAA and is coming off a WKU and NCAA record setting season, was impressed with the quality of football he saw over spring training, but remains focused on the team’s ultimate goal for next season.