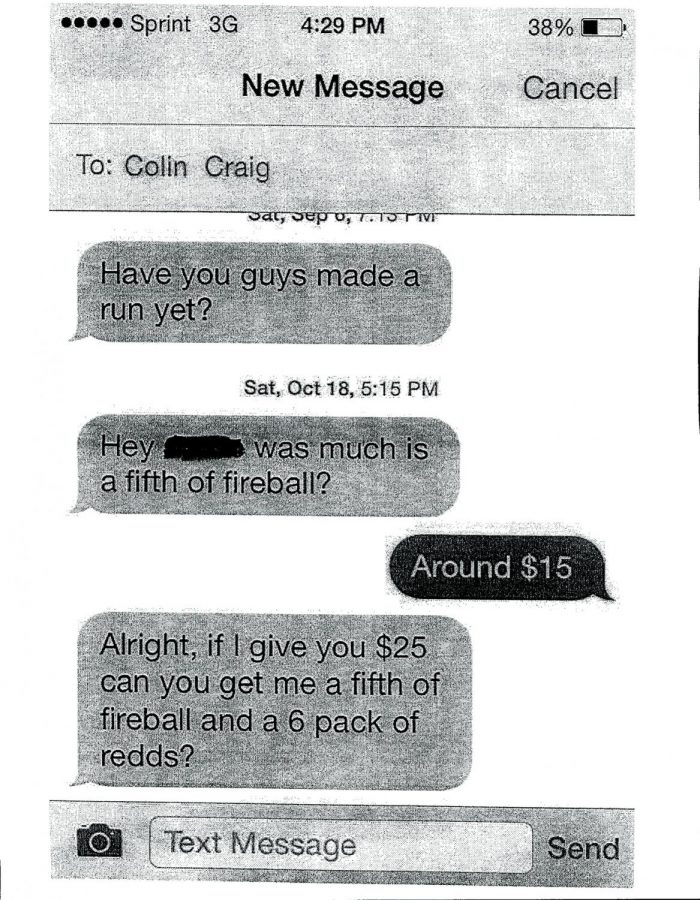 Screenshot of a text message provided by Brian Lowder.

Former swimmers are speaking out about the university’s five-year suspension of the swim team.

“[Craig’s claim] starts off with a summary that during his recruiting trip he was led to believe the swim team was a close-knit group that supports each other,” Lowder said. “If he came here on recruiting visits and trips, then he would’ve experienced the culture of hazing that he so adamantly complains about now. Whether that’s right or wrong, he would’ve come here and seen that, yet he made the decision to come to WKU.”

On April 14, 2015, President Gary Ransdell and Athletic Director Todd Stewart informed the university that the Swim and Dive teams would be suspended for five years as a result of the investigations.

For Olympic gold-medalist and 2010 graduate Claire Donahue, the news was devastating.

“It hits me every day,” she said. “You  wake up and you think it’s a dream or a nightmare, and it’s not. It’s real life. Myself and these kids are having to deal with it. It’s been a crazy adventure.”

The day of the announcement, Donahue was headed to a swim meet when she received two voicemails, one from a former teammate, the other from WKU Head Swim Coach Bruce Marchionda.

“I talked to him first, and I cried a lot,” she said. “It’s not something you want to hear. It’s my family, and now we’re all splitting up. We’ll still keep in touch. I keep in touch with the people I swam with, and I love them dearly.”

“The problem that my clients and that I see with this situation is no personal responsibility for participation in this taken by Mr. Craig,” he said.

Lowder said his clients admit to the inappropriate behavior, but he noted that Craig could have come to swim captains or coaches directly for any problems he experienced, particularly involving forced drinking.

“It was Mr. Craig’s choice to consume alcohol,” Lowder said. “I’ve been provided texts that range from September and October and clearly indicated that Mr. Craig was seeking alcohol. He’s asking teammates to get it for him for the recruits.”

Even if Craig had a problem with the swim team, Donahue and Lowder both said he could have come to either the swim captains or the coaches directly. According to Craig’s report, the first person he told about the hazing was his sister.

“While home for the winter break my parents confronted me with concerns of my wellbeing,” Craig’s statement said. “However, it was not until I confided in my sister… that I realized the actions I was told was ‘tradition’ were actually hazing and were illegal and damaging to group participants.”

Donahue said the family she experienced at WKU still existed even when Craig came to the university.

The university’s decision to suspend for a full five years didn’t add up with other, more detrimental hazing incidents around the country, Lowder said.

Lowder said his clients are satisfied with the Judicial Affairs ruling.

Donahue’s future, however, is a bit more uncertain. Donahue had been training with Marchionda for eight years, but Marchionda’s position will be terminated effective June 30.

“Now I’m going to have to leave,” she said. “I’m not going to be able to stay, and that’s a sad thing. This is my home. I mean I’ve lived here for eight years. WKU has been extremely supportive and helpful… There’s no team here to train with…. It would be impossible for me to stay.”