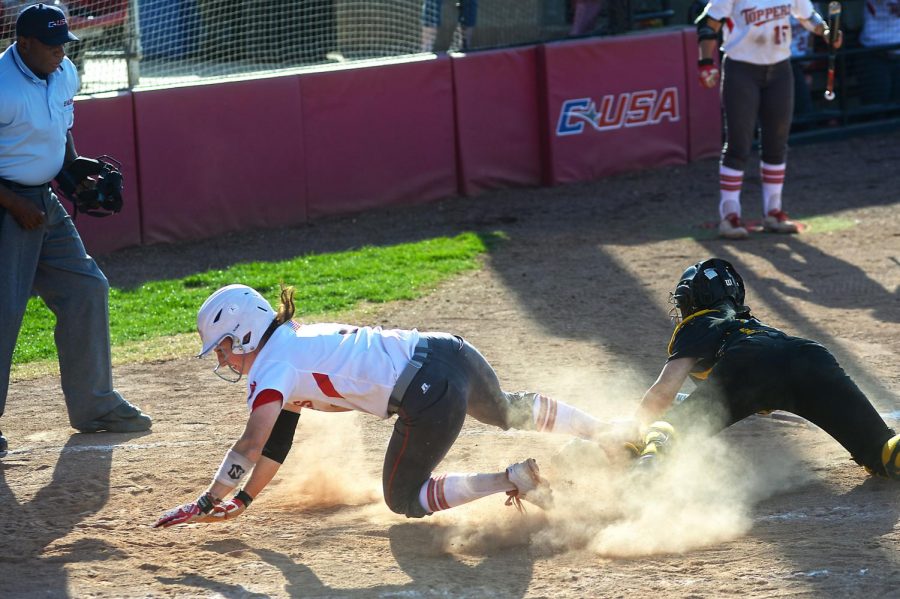 WKU junior Brook Holloway dodges the tag to score a run against USM. This was the third of six runs scored by the lady Hilltoppers during the second game of the double header played on April 11. The game ended with the lady Eagles being shut out 6-0. SPECIAL TO HERALD/ Andrew Livesay

The Lady Toppers will play the Charlotte 49ers this weekend in a three-game series for their last home games of the spring season.

A doubleheader will take place on Saturday and the series will end with a single game the following day. The 49ers (ranked No. 101) have won 11 of their 17 away games played.

Expectations for this final home series are high.

The C-USA series will be held at the WKU Softball Complex. The first two games will start at 1 and 3 p.m. respectively. The third and final game of the series will take place, Sunday at noon.

The Lady Toppers traveled to Lexington this past Wednesday to play an intensely competitive game against the No. 17 Kentucky Wildcats.

“We like to think of it as a rivalry, and we’re going to go in there and compete,” said Tudor prior to the game. “You know we have to be ready for one of the best pitchers that’s out there. She took it to the World Series last year. She’s a high quality pitcher.”

Prior to the Wednesday match up, the Wildcats (13-7, 8-3) had won 10 of their last 11 meetings and were on a seven-win streak. The Lady Tops haven’t pulled a victory against the Wildcats since 2007.

The game against the Wildcats had not ended as of press time.

Many Lady Toppers are on hitting streaks, including Dani Pugh, Larissa Franklin and Preslie Cruce. Pugh recently knocked her third grand slam of the season in the game against FIU last weekend, sending WKU to a victory of 11-0 in just five innings.

Franklin is on a nine-game hit streak, while Cruce has made it to the base 10 games in a row.

Franklin has racked up 13 hits, eight runs, five RBI and five walks to total her at a .448 average. Cruce has hit .296 with eight hits, six walks and two hit by pitches.

Coming up for the rest of the season, after this weekend, are just four more games before WKU softball travels to the C-USA Tournament in Miami, Florida.

WKU will finish out the season traveling to away games including one non-conference game against Louisville on April 29 and then another C-USA series the following weekend.

The last games before the tournament will be played against Middle Tennessee in Murfreesboro in a doubleheader on May 2 and their last regular season game on May 3.