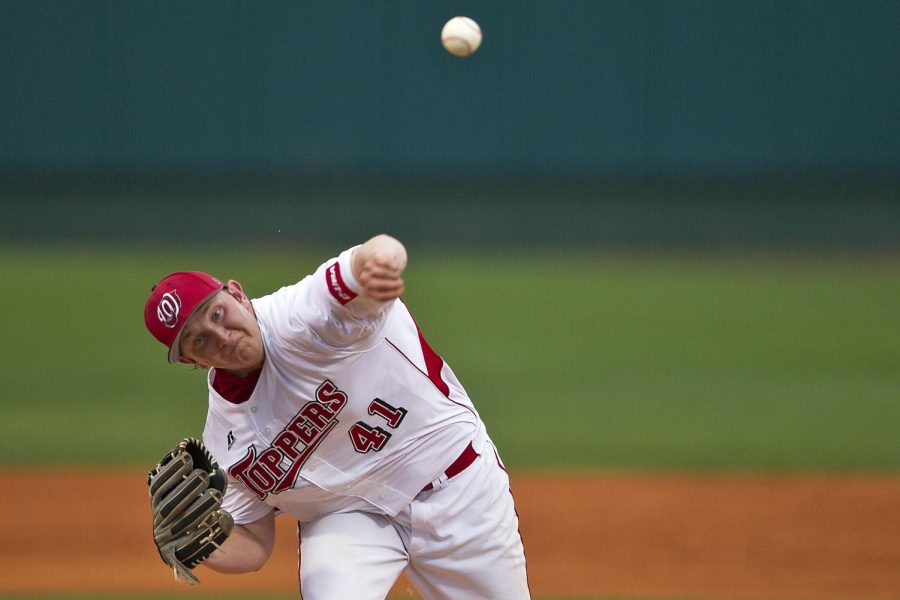 The WKU baseball team (20-17) clinched its fourth Conference-USA series win on Sunday in Miami with a dominating 17-2 victory over the Florida International Panthers (17-22).

The Hilltoppers opened up the series on Friday with a 6-4 victory, but the Panthers evened the series on Saturday with the same score line.

WKU buckled down in the rubber match on Sunday as the Hilltoppers run-ruled the Panthers in seven innings.

“This was a huge game for us this year. It seems like every weekend we put ourselves in this kind of position,” Myers said. “I told them that I would take them to a good dinner if they could get us out of here in seven innings, and they did it.”

The first contest of the series featured competitive play from both teams, with the score locked at two through the first six innings.

After a tense six innings, junior outfielder Anderson Miller put the game away for good with a grand slam in the seventh to put WKU up 6-2.

Junior starting pitching John Harman pitched a quality start for the Hilltoppers as he gave up only two runs on three hits, earning him his fourth win of the season.

Sophomores Kevin Elder and Ben Morrison, along with senior Tate Glasscock, provided strong pitching from the bullpen as the trio held FIU to two runs on only four hits. Morrison would earn the save as he pitched a perfect ninth inning.

The second game of the series featured a much dimmer outcome for the Hilltoppers. WKU left 11 men stranded on base while also committing two errors in the Panthers’ Saturday victory.

The Hilltoppers also left the bases loaded twice within the first three innings, never being able to capitalize on their opportunities.

Despite the 6-4 loss, junior third baseman Danny Hudzina earned three hits on the day in his three at bats and added a RBI to the WKU effort. Starting pitcher junior Austin King gave up four runs on five hits in just two innings of play. Senior Brennan Pearson earned the loss on the day as he gave up two runs on four hits through 4.1 innings.

On Sunday, the Hilltoppers put on one of the best team performances of the season almost 1,000 miles away from home. The team earned 17 runs on 17 hits while only giving up two runs on nine hits.

Senior first baseman Ryan Church enjoyed one of the best days of his career as he earned a hit on all six of his at bats, adding five RBIs to the Hilltopper effort.

The Hilltoppers scored runs in five consecutive innings to begin their run-rule victory, which included a nine-run fifth inning, their highest scoring frame of the season.

“I thought our kids were outstanding today,” Coach Myers said. “They really locked arms and our offense was hungry as they went after those guys and they just did a great job.”

The victory snapped a tie in Conference USA action between the programs as the Hilltoppers now hold the tiebreaker and a one-game advantage over the Panthers.

Up next for WKU will be a Wednesday visit to the University of Louisville, who ranks Top 5 in every national poll and has won 12 of its last 14 games.