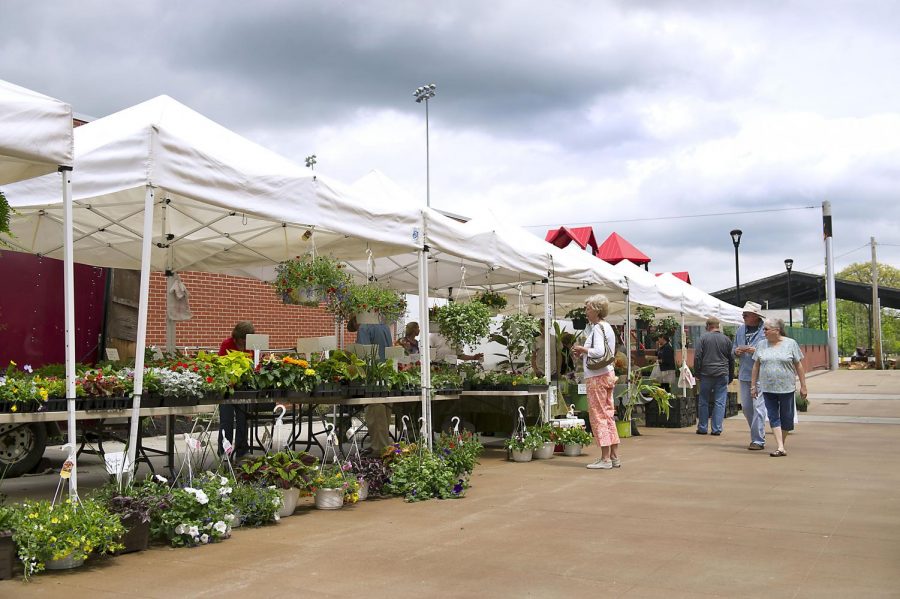 Vendors offered products to customers at the new SoKY Marketplace in Hot Rod Alley at the Bowling Green Ballpark on Saturday, April 25, 2015. The market is currently constructing a pavilion seen in the background with hopes to fill the building to its maximum capacity of 80 vendors. As of yet, only 24 vendors are set to sell their goods when the pavilion will open at the beginning of June.  Nick Wagner/HERALD

On a cloudy Saturday morning at Hot Rod Alley, a little girl in her pink rain jacket clutches a bag full of bright green rosemary.

She glances back to her parents and bolts with her new organic trophy, struggling to keep hold of the bag of greens as Mom and Dad begin a quick chase after her.

There are a few in the trickling crowd of consumers perusing the newest addition to Bowling Green’s Gateway Farmers Market, which is operating under the name SOKY Market Place.

Nestled between the Bowling Green Ballpark, home of the Hot Rods, and the closed Hitcents Plaza, vendors line up every Tuesday and Saturday morning to sell kaleidoscopic bouquets of tulips, pale orange carrots speckled with dirt and spotted eggs, among other goods.

This open space, however, is rented. Their permanent home is still under construction, next door along Seventh Avenue.

“This a great opportunity for not only more local foods to be around, but it provides a venue for our producers that want to sell in Bowling Green, especially,” said Brittany Young, board chairman for the SOKY Market.

A metal awning, surrounded by overgrown grass and weeds, covers the large floor below. The roof is thatched with a transparent polycarbonate material, allowing the natural light to filter in while protecting the construction cranes and lifts below. Rain has delayed these machine giants from completing the pavilion and neighboring bathrooms by the original early April deadline.

To the pavilion’s immediate right, however, lies the crown jewel for the market’s board and vendors. A brick and mortar building, long with small white windows dotting the front and sides, its tan double doors chipped with paint, will house the market’s commercial kitchen.

The commercial kitchen will allow the vendors to cook, can and preserve, while customers will get a chance to partake in weekly cooking lessons from featured chefs. The kitchen itself will be available to rent in four-hour increments.

“That’s where I’ll be when that gets done. I’ll be in that kitchen doing cooking classes,” said CJ Miller of CJ’s Culinary Journey.

Miller is a personal chef who advocates for fresh, local ingredients. Miller is also an ambassador in Jamie Oliver’s Food Revolution. Miller wants to use the kitchen to start a food delivery service.

The idea for this new marketplace was conceived months ago by a small group of officials in the county. Amy Milliken, Warren County attorney, was among other county officials, including Jody Richards, who formed the first Board of Directors for the farmer’s market. They began working on ways to fund the farmers market, ensuring a permanent space for years to come.

“Warren County is an agricultural area and we wanted to show that our farmers are appreciated and supported,” Milliken said.

Gateway was approved for up to $220,000 in state grant money, with another $61,500 coming from the county to construct a 12,000 square foot farmer’s market and renovate Taylor Chapel for a commercial kitchen, according to a memo from the Governor’s Office of Agricultural Policy. The grant was awarded through the Kentucky Agricultural Development Fund.

The first phase of construction for the market pavilion and kitchen is expected to cost around $400,000. The county will cover the remaining cost not covered with aforementioned grant money.

Milliken said the final contract for the grant, however, is not complete. Brian Murphy, general counsel for the Governor’s Office of Agricultural Policy, is coming to survey the project and finalize the contract with the market’s board.

While some have criticized the new market for its financial backing, others have viewed it as a new opportunity for a permanent home. Most recently, SKY Farmers Market joined forces with SOKY. SKY had a nomadic history before finding SOKY as its permanent home, bringing vendors with it.

“We were already a member of SKY, and SKY was moving over here so we just decided to come here with them,” Gary Robbins, farmer for ATP Greenhouses, said. “They’re going to have a wonderful facility here.”

Robbins and his family have been farming for years, growing tomatoes out of their greenhouse for Bowling Green City Schools and now, WKU.

“Nobody has tomatoes this time of year, so we do pretty good,” Robbins said.

Robbins said they also grow a variety of other vegetables, raise chickens and bake fresh breads and pastries for their market booth.

Young said the new pavilion should be up and running by June, rain and inclement weather permitting. A grand opening and ribbon cutting has been set for June 10. Young said there will be inflatables, music and garden starter kits for children.

“This is going to be a permanent place that will have a farmer’s market forever,” Young said.