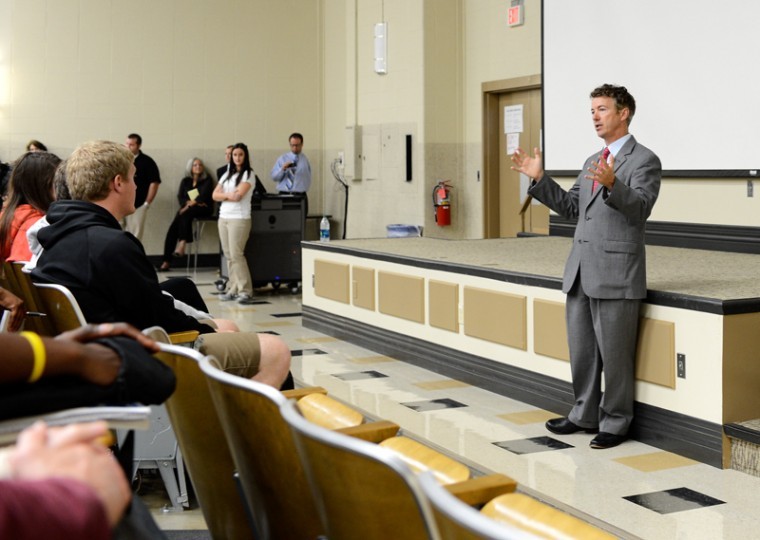 Bowling Green’s own Sen. Rand Paul (R-KY) announced his bid for the White House on Tuesday in a packed ballroom in downtown Louisville.

Fountain Square Park— and the passion of 700 Tea Party supporters who filled the downtown park six years ago when Paul first ran for U.S. Senate— were shouted out in speeches by both the senator and his wife, Kelley Paul.

But most mentions of Kentucky, in both pre-announcement campaign videos and speeches from Louisville pastor Jerry Stephenson, revolved around Derby city.

Scott Lasley, chairman of the Kentucky Republican Party for the 2nd District and associate professor of political science at WKU, said that while the references to Louisville were “well-choreographed” and linked to the recent opening of a Republican campaign office in West Louisville, Paul’s Bowling Green won’t likely be a star in the campaign.

“I would think that even though Bowling Green is his hometown, he’s not going to be as connected as Jimmy Carter was to Plains [Georgia],” Lasley said. “I don’t think it’s the same type of relationship that you’ll see with some of these other folks.”

Among the crowd for the senator was Bowling Green native Austin Hatfield, who came with a group of college students working on Agricultural Commissioner James Comer’s gubernatorial campaign.

Campaign videos for Paul targeting young voters focused on the NSA’s data-gathering practices and monitoring of metadata. In his speech, Paul announced while holding his iPhone that he would repeal that data-gathering policy through executive order on his first day in office.

Videos also highlighted his trips to Ferguson, Chicago and West Louisville to try to fix policies that aren’t helping income and education disparities for those residents and laws that may unfairly target African Americans.

“I think that’s necessary,” Hatfield said of Paul’s more socially progressive policies. “I think the Republican party, I’m not sure what party they are anymore and I think what he’s doing is bringing us back to our base.”

Bosler said she’s been interning with Paul since she was in high school because he’s “so different than any other politician.”

Bosler said after the speech that college students identify more with Paul’s libertarian principals and his outsider politician status.

Lasley agreed that younger people do tend to be more socially liberal, but sustaining a lot of politically active young people is difficult, pointing to President Obama’s 2008 campaign.

“Now I don’t think there’s a huge pool of young libertarians running around,” Lasley said. “Most of them are not particularly active in politics and that has not changed.”

He said Paul’s campaign will have to appeal to his father Ron Paul’s political base as well as his own, while not alienating libertarians and independents.

“I think he’s probably trying to walk that line but at the end of the day… the bulk of republicans that are going to participate in the nomination process are going to be older, more conservative republicans,” he said.