Men ‘Walk a Mile’ for a higher cause 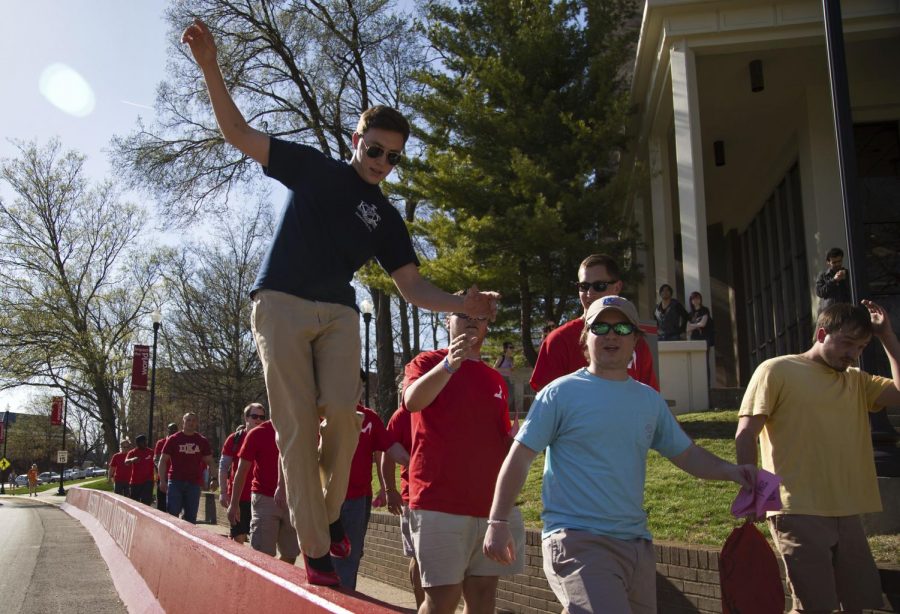 Hebron, Ky. senior Connor Snyder balances on a traffic barrier along Normal St. during Walk A Mile in Her Shoes Tuesday, March 31, 2015, in Bowling Green, Ky. 'I want to say it's fun but I'm a little sore afterwards,' Snyder says. Walk A Mile is an annual event in which male WKU students walk from Centennial Mall to Cherry Hall and back in order to raise awareness about sexual assault. Mike Clark/HERALD

Students walking by Centennial Mall on Tuesday might have been perplexed to see tables with stacks of shoeboxes and folded T-shirts set up, a podium on a small stage with music playing, and people milling around.

They might have been even more befuddled when they saw the crowd of 50 or more men set out from Centennial Mall wearing high heels. Such sights were simply part of this year’s Walk a Mile In Her Shoes event.

This is the fifth year WKU has participated in the national event, which seeks to raise awareness about rape, sexual assault and gender violence, as well as provide an opportunity for discussion.

Registration cost $20, which paid for the red heels and red T-shirts the male participants would wear. Non-participating students could buy a white T-shirt for $10. All of the proceeds support Hope Harbor, the community crisis counseling center.

By making men walk a mile in high heels, the event fosters discussion about rape, sexual assault, gender violence and ways to prevent and recover from it.

This year, about 45 men registered to take part. Students could also walk up and register at one of the tables set up. Several participants have taken part in years past and are coming back again

Karl Laves, assistant director of the WKU Counseling and Testing Center, has taken part in this event once before. He said he participates because it gives voice to an important issue.

“We just don’t talk about it enough. It’s easily ignored,” he said. “A group of guys coming out like this and making a statement, it really skews the bias and contradicts ‘boys will be boys.’”

Garrett Haug, a senior from Nolensville, TN, also returned to the event.

“I’ve actually done it all four years I’ve been here,” he said.

Alex Kennedy, coordinator of Student Activities, said there were an impressive number of guys participating.

“They have more registers this year than years past,” she said.

Once the men had donned their shirts and heels and took a few tottering practice steps, they gathered around the stage to hear Elizabeth Madariaga, event coordinator, speak.

“This is students, staff and faculty showing that WKU is not going to tolerate sexual assault and violence on campus,” Madariaga, Sexual Assault Services coordinator, said. “It affects all of us, and this is a good way to stand up and speak out.”

She signaled for the men to start their long trek up the hill, and spectators watched as the men click-clacked their way across the sidewalk.

After about 20 minutes, the men came into sight again at the other side of Centennial Mall, and people started to cheer them on. As they got closer, participants jogged— as best they could— across the finish line. As soon as they were across, they immediately tugged off their shoes with obvious relief.

Allan Moreno, a junior from Nashville, TN, said he learned a lot from this experience.

“At first, I thought it would be a piece of cake,” he said. “You know, girls always wear heels at dances, and after like 30 minutes they’re like ‘I gotta take these off,’ and I never knew why. Now I understand why. This definitely has an impact on the point of view of guys.”