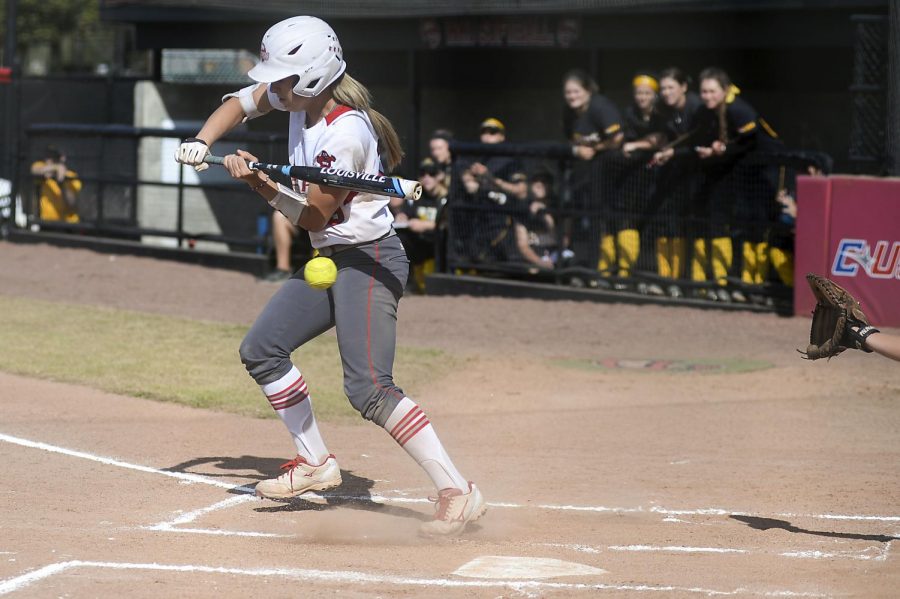 WKU Senior Larissa Franklin bats during the second of two games against USM on April 11, 2015 in Bowling Green. The lady Hilltoppers took on the USM lady Eagles in a back to back double header, wining 7-1 then 6-0. Andrew Livesay/ Special to the HERALD

The WKU softball team will start their stint in the tournament on May 7 in Miami.

They will travel to the home of Florida International University, whom the Lady Toppers recently faced in a three-game series last weekend. WKU took the first two games, but FIU held out in the last game, winning 2-1, to avoid a series-sweep from the Lady Toppers.

This series win was their fifth conference win in a row.

“Well, it’s nice to win a conference series on the road. We’re a little disappointed that we didn’t get the sweep, which I felt we should have, but we own the series, and we’re still in a good place,” Head Coach Amy Tudor said. “We just didn’t hit our best. The pitcher did a good job against us.”

Though the schedule and lineup for the 2015 C-USA tournament is yet to be announced, the competition and excitement for WKU is escalating quickly.

“Obviously we want to go win the conference tournament,” Tudor said. “In our division [the competition] is Florida Atlantic and Marshall. Both are very good teams.”

WKU will play their last conference games before the tournament on May 2 and May 3 against Middle Tennessee at an away game in Murfreesboro, Tennessee.

The competition and season is warming up for the Lady Toppers as WKU moved up in the ranks to No. 31 in this week’s NCAA RPI release.

“[To be ready for the tournament] I think we just have to maintain our consistency with the plays, be consistent in the circle, and when our bats are hot they’re hot and when they’re not they’re not, so if we could have some consistency in our hitting lineup it’s going to help us win a lot more ball games,” Tudor said.

WKU has not lost to an opponent below the 100-rank this season.

Senior pitcher Miranda Kramer is currently a six-time C-USA Pitcher of the Week winner and is ranked top three in five categories of the NCAA.

The Iowa native and transfer from IPFW will be pitching her last C-USA tournament. Kramer was draft-picked sixth by National Pro Fastpitch team Pennsylvania Rebellion.

Kramer will be pitching against some of the other highest ranked pitchers in the conference at the tournament coming up.

The Lady Toppers will be traveling all over Kentucky and Tennessee to play against the next three opponents in the weeks leading up to the C-USA tournament. If the Lady Toppers win the conference tournament, they will go on to play in the postseason.

“We have to take care of business now. We can’t look ahead of that. We’re hoping to play in postseason obviously. That’s what we’re working for, but our first step is to plan for winning the regular season Conference USA and then our next step is to go into tournament. So, that’s where our heads are at right now,” Tudor said.