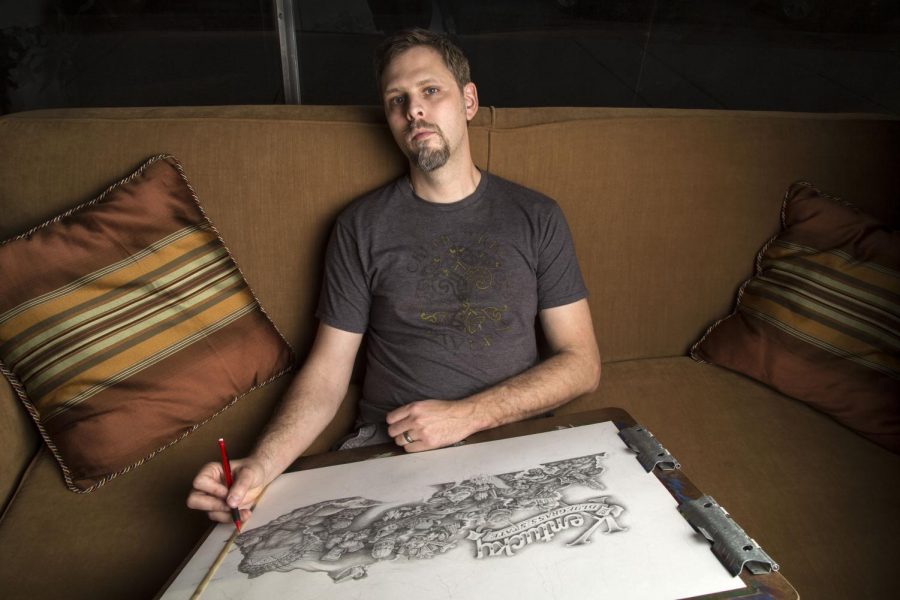 Paducah native John Thompson loves to draw. By day he manages the Bowling Green branch of design firm ZebraGraphics. By night, he takes up his pencil, sits at his easel and sketches intricate illustrations. His art has caught the attention of the community at large. Thompson’s work graces the Diddle North lot entrance to Diddle Arena.

“I’ve been drawing all my life, just for fun,” he said.

Thompson said he’s been drawing since he was old enough to hold a pencil. He said art has always been something he’s wanted to do, and he’s always been driven to draw. He said during high school he would often draw his own comic books.

The style he used in his comic books of exaggeration and unrealism has spilled into the work he does today.

“Sometimes I joke that my art career streams from 13 years of getting in trouble for drawing in class,” Thompson said.

Thompson’s artistic work started off with portraits, but now he finds himself doing illustrations. One of Thompson’s recent works was an illustrated map of Bowling Green. The map was drawn in his comic-like style and included many of Bowling Green’s iconic features—the Corvette museum, WKU’s campus, the Square, Beech Bend Park and Southern Lanes. For this project, he said it took a lot of research and a heavy amount of time put in.

“Maybe 100 hours. I wasn’t keeping track,” Thompson said. “This is something that I’ve always done in my leisure time mostly, and this was more of a labor of love, so I wasn’t getting commissioned to do it or really keeping track of my time.”

Candle Makers on the Square is one of the local businesses that features Thompson’s work. Brittney Black, manager of Candle Makers, said the store began showcasing Thompson’s work in September of last year. Black said people, especially tourists, love his portrayal of Bowling Green, and she applauds his work as well.

“I, personally, love his work. His drawings are amazing,” she said.

“They liked that homespun, hand drawn quality about it and they wanted their mural to be in that same style, but very colorful,” he said.

Brandon Jones, marketing coordinator for Houchens Industries, said the company  had worked with Thompson on projects through ZebraGraphics. Jones has known Thompson for several years personally and professionally.

“I’ve seen quite a bit of his work and he’s phenomenal,” he said.

Jones said the premise behind the Houchens Industries mural was to artistically and creatively display causes that are important to Houchens. Organizations such as United Way, Junior Achievement and the Center for Courageous Kids are all featured icons on the mural. Jones said he and Houchens are very pleased with the finished product.

Thompson is now working on an illustrated map of Kentucky he began a couple of months ago and continually updates in his free time. He said it has been an educational experience for him, since he knows Bowling Green more than other cities. Thompson is attempting to show cities for what their best known for, like the Kentucky Derby in Louisville and the barbecue in Owensboro.

“I’m trying to iconize each major city by showing what it’s known for,” Thompson said.

Thompson is also working on a commissioned project with the United Way of Southern Kentucky for their 25th anniversary. Thompson said he doesn’t plan on quitting his job at ZebraGraphics to pursue a full-time job as an artist, as both have continually provided him with creative outlet.

“In my day job, I get to be creative, and in my night job I do as well. Like I said, the influences overlap one another, and it’s worked out very well,” Thompson said.