NYTW: The leading ladies of each genre are crowned 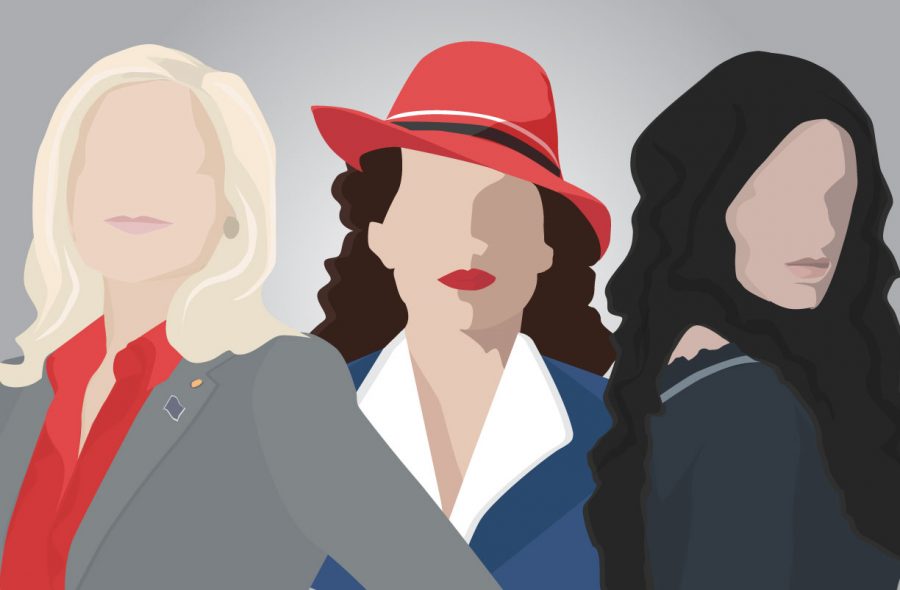 “Not Your Typical Woman” is a play on viewer expectations formed over decades of female misrepresentation on TV. Typical women in visual media are usually superficial characters, often defined by the men in their life. Typical TV women lack the depth of a real person, even if the show is surrounded in fantastical or surreal settings.

The irony of typical women on TV is that real women do not act or live this way. Not all women choose to live in the shadow of men. However, contemporary TV breaks down conventions of what it means to be a woman on the small screen. Because of loosened cultural gender roles and the rise of feminism, modern TV has started to present honest, layered, complex women.

These atypical TV women usually acknowledge and overcome patriarchal setbacks while commenting on the absurdity of gender prejudice. More importantly, atypical TV women do not need the support of a male character, but will gladly accept assistance. These women control the plot line and surrounding characters develop for them.

These three women deserve recognition above others in their genres because they face more obstacles than their TV peers. Where other television programs present a more gender neutral atmosphere, these shows allow their female leads to conquer more than just plot line conflicts. They must swim against the tide of their own culture and circumnavigate established gender constructs.

“Parks and Recreation,” one of the most beloved comedies on TV, ended this year. The star of the series, Amy Poehler, is a clear front-runner for comedy’s strongest woman. Poehler’s character, Leslie Knope, provided viewers interesting commentary on social struggles still inherent in certain cultural institutions. Knope topped the comedy list because she is genuinely a good and likable person. It is hard to say no to someone like Knope because she just doesn’t give up. Ever.

Beyond the silly, gimmicky personality traits Knope displayed over the years, viewers know she is a real person. Knope is one of the most relatable personalities in comedy. Perhaps because she has experienced the array of human emotions on screen (sometimes within the same episode), Knope knows what it feels like to be embarrassed or proud, to be frustrated and accomplished.

Knope was an interesting composite of contradictions. She was determined and distracted, likable and annoying, as well as bitchy and a push over— Knope was a walking commentary on the pitfalls of female success and a parody of male criticism.

“Parks and Recreation” came to an emotional close this year, but used the final season to continue to preach feminism to the modern world. The season addressed women in upper-politics, females in academia and new perspectives stemming from the absence of many fixed gender roles. In the final season, Poehler boils down modern feminism into a single sentence. When criticized for “making” her husband, Ben, bake for a contest, she addresses a crowd of men’s rights activists and says, “If you want to bake a pie, that’s great. If you want to have a career, that’s great too. Do both or neither, it doesn’t matter. Just don’t judge what someone else has decided to do.”

Of the many Marvel and DC adaptations to reach TV this year, “Agent Carter” offers the most unique and perhaps most inspiring female hero. Peggy Carter tops the list for this year’s super-ladies because she overcomes more challenges than your average female protagonist (superhero or not). The show was short lived and, what’s worse for fans, may not be continued for a second season. This is unfortunate as many Marvel fans have noticed the larger presence of male superheroes and protagonists that often take center stage on movies and TV. Perhaps humorously, “Carter” has yet another obstacle to surpass—gaining another season. It seems with low ratings and an uncertain future, the show comments on sexism too frankly for Americans.

“Agent Carter” brings social commentary distinctly missing from other live action comic adaptations that are set in contemporary times. “Agent Carter” is set in the mid 40s, an era defined by rigid gender roles and expectations. Carter, on the other hand, pursues a career in a secretive government organization, essentially as a spy.

The most admirable facet of Carter’s success is her ability to manipulate her position in society for her own gain. Carter is able to use her womanliness to outwit her enemies and friends. She plays with the idea that women are limited in knowledge and unable to be physically threatening.

The agent deserves some recognition. If Carter isn’t fighting for approval amongst her peers, she is fighting for respect in her society. Not to mention, Carter is literally fighting criminals in almost every episode. Perhaps more impressive, Carter lacks superhuman abilities that allow many of Marvel’s other cinematic characters to succeed. Carter is a woman who was told by her own culture, job, peers and enemies to back down; yet she is a woman whose wit and determination alone overcomes all odds.

“Salem,” now in its second season, is a gritty, brutal retelling of the infamous Salem trials. Though the show itself is full of revolutionary female characters, Mary Sibley stands out the most.

“Salem” topped the list above other dramas because of the complex issues of female representation in society tackled by Sibley alone. Sibley is a collection of taboos. She is a cunning social climber and machiavellian power house within her town and coven—all while usurping gender and economic roles through various schemes. Sibley rules two separate spheres of society. She not only sacrificed her life to lead the marginalized, she also clawed her way into a position over Salem. The show illuminates subversive ways the oppressed use to access authority. And, perhaps by overdoing the gore and blood, the show educates audiences of the consequences innate in colonizing as well as rebelling. The show details the struggle of the marginalized, the desperation of the lower classes and the frustration of the voiceless. Her character also brings unconventional portrayals of female sexuality and pleasure to the small screen.

Sibley, especially in the latest season, is often accosted for her gender. Hathorne, Sibley’s newest male adversary, has spent the last four episodes attacking the idea of female leadership. In the first episode of the latest season, Hathorne slices through Sibley’s hold over Salem and lectures the public on the merits of masculine leadership saying, “We have utterly upended the most fundamental principle of how things are to be, which is led by men. Men of property, men of substance, men of godly goodwill. But above all, by men.” Sibley offers a poignant rebuttal two episodes later saying, “A strong woman is no more to fear than a strong man.”