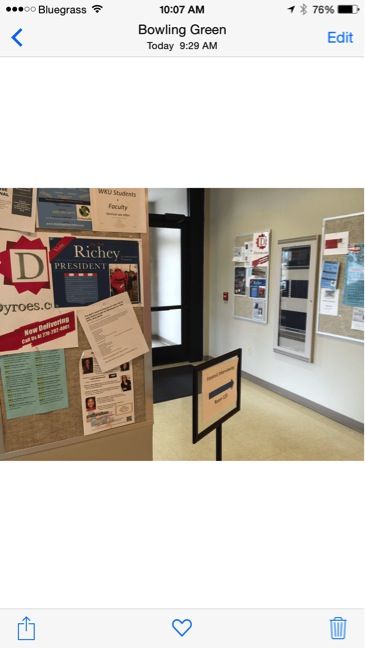 One of eight screenshots submitted in an anonymous appeal shows Richey's campaign posters on boards at South Campus.

An anonymous source claims Richey violated code 3.4.13, “All candidates shall remove all campaign material from university property no later than five (5) days after election.” The petitioner submitted eight photos that Richey’s campaign materials are still hanging up on South Campus, SGA president Nicki Taylor said in an email.

The unnamed petitioner called for Richey’s disqualification as president.

SGA senator Zach Jones submitted an appeal regarding the legality and validity of election code 3.4.6, “There shall be no campaign material distributed into or onto doors or doorways on campus.” In Jones’s appeal, he wrote that the code hinders a candidate’s freedom of speech.

“The prohibition of a student’s ability to freely express their support of a candidate by the placement of a flyer on their legal place of residence on campus, which determined by the signing of a lease with Housing and Residence Life, is an egregious violation of the 1st amendment,” Jones said.

There are now three election code appeals that will be discussed at a special-called SGA meeting on April 16 at 4 p.m. in SGA chambers. Both Jones and the anonymous requesters will have the opportunity to speak on behalf of their appeals.

The Herald will update this story as it develops.