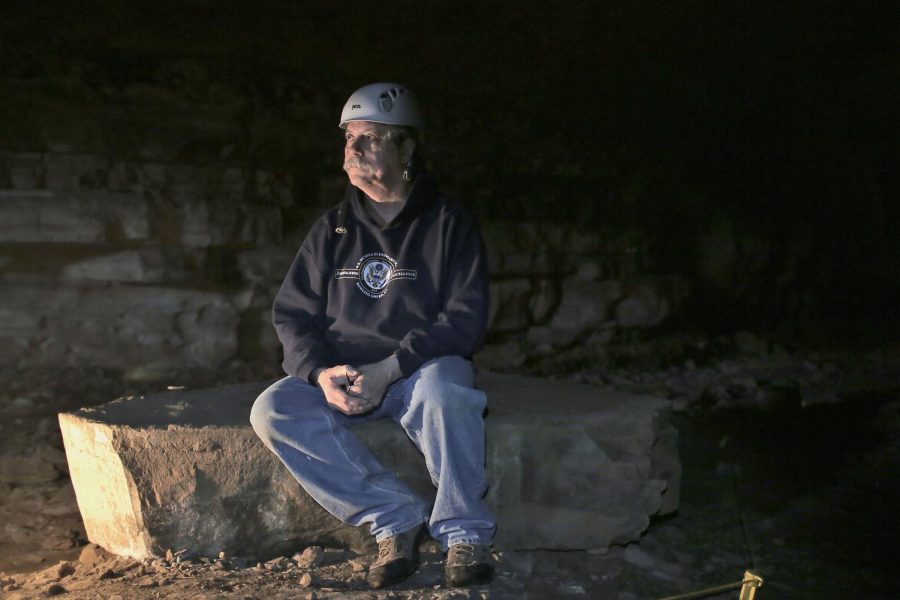 WKU Geology and Geography Professor Dr. Chris Groves sits in Crumps Cave, where he and other colleagues researched hydrology, ecology, archeology, geology and biology in 2015. The biological focus of their research was white nose syndrome – a disease threatening the lives of the federally endangered gray bats – which was discovered in Crumps Cave.

While bats aren’t everyone’s favorite creatures, they play an important role in the ecosystem. They eat large numbers of mosquitoes and other pesky bugs.

These flying mammals, however, are currently being threatened by a dangerous disease known as white-nose syndrome.

Within Crumps Cave, 12 tri-colored bats out of a population of 53 had observable signs of the often fatal disease. The symptoms were discovered on Feb. 10, when Rick Toomey, director of the Mammoth Cave International Center for Science and Learning, and a team of National Park Service scientists visited the cave to observe the bat population.

Symptoms of the syndrome include the appearance of a white fungus on the bat’s nose, wings, ears or tail. It is caused by a fungus, called Pseudogymnoascus destructans, that grows in cold environments where bats hibernate.

Crumps Cave, located near Smiths Grove, is owned by WKU and used to research and protect the various flora and fauna in that area, as well as the cave itself.

Bats are the first line of defense against agricultural pests, as well as other insects, such as mosquitoes, that can carry diseases. Bats eat a large number of insects every night, keeping populations in check. If the bats started to die out, the number of insects would increase, leading to the use of more pesticides or increased transmissions of diseases.

Robert Schaefer, a graduate student from Cecilia, works at Crumps Cave. He’s seen several members of the bat population and is aware they were recently found with WNS. Schaefer said he understands the role bats play in our ecosystem.

“An issue like this matters in that WNS is decimating our native bat populations,” he said. “They are responsible for a large portion of our natural insect control, so we should be concerned about solving this issue.”

Christopher Groves, a hydrogeology professor in the department of geography and geology, stressed the seriousness of the situation.

“This is a disease that is ravaging bats, and so far, more than five or six million of them have been killed by this disease since it was first discovered in 2006, and so far, there is absolutely nothing to do to stop it,” he said. “They understand what’s doing it now, but there’s no treatment or preventative for it,” he said. “So, it’s very clear that there’s at least a possibility that there’s subspecies of bats, who know how many, who could go extinct in a really short period of time.”

Whitenosesyndrome.org, an informational website which offers methods for fighting against WNS, describes scientists’ current understanding of WNS and its outcomes.

“Bats may lose their fat reserves, which they need to survive hibernation, long before the winter is over,” the website said. “They often leave their hibernacula [a shelter occupied during the winter by a dormant animal] during the winter and die.”

Since there’s no cure, the current approach is to not disturb the bats and let them fight the disease on their own. Secluding the sick bats from the healthy could worsen their condition or spread to unaffected bats.

Toomey suggests that those venturing into caves need to make sure their cave gear is clean and free of  contamination as they move from one cave to another to prevent the spread of the fungus. Scientists believe the disease is transferred by the bats themselves, but also by people tracking it through shoes and other gear.

Toomey says that while not much can be done for the sick bats, the survivors will need help.

“The bats that are still surviving need as much good habitat and as much help as possible, so helping to maintain good habitat, bat houses and things like that will help the bats that make it through this,” he said. “The bats that survive are going to need as many friends as they can get.”