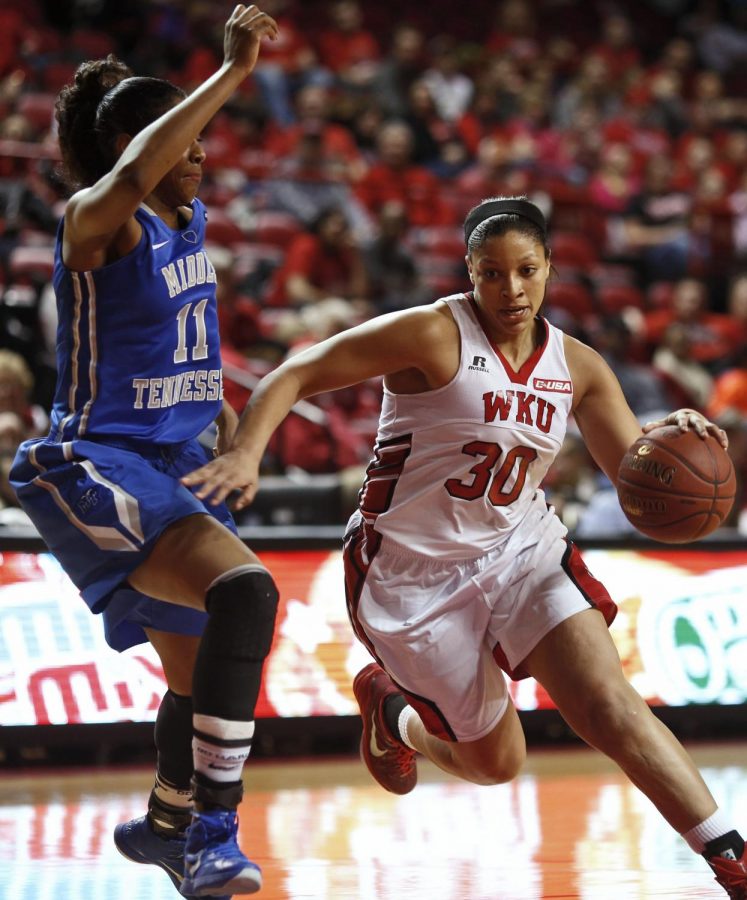 WKU senior forward Chastity Gooch (30) drives the lane against a MTSU defender Saturday Feb. 21 in the two teams' Conference USA matchup. WKU would go on to defeat conference rival MTSU in a game that went down to the final buzzer by a score of 63-60. (Luke Franke/Herald)

The Conference USA regular season champion Lady Topper basketball team used a major defensive stand at the end of the game to push past Old Dominion on Saturday afternoon 71-62.

“A hard-fought battle,” Head Coach Michelle Clark-Heard said after the win. “Which we knew it would be, but I’m just really proud of our girls—they just continue to keep on fighting; seniors stepped up in big moments… Just team across the board, and that’s what we have been all season.”

After the contest, the careers of seniors Chastity Gooch, Alexis Govan and Ileana Johnson were recognized as part of senior day.

“It was a dream-come-true and it went by fast,” Gooch said of her Lady Topper career. “This experience was once in a lifetime and words can’t describe how I feel right now.”

“This is a bitter-sweet day, but I know that it’s not over and I know they are focused on the next thing,” Clark-Heard said. “Let them enjoy this moment, and then we will focus on the things we need to.”

The Lady Toppers will enjoy a first-round bye in the C-USA tournament this week in Birmingham, Alabama. They will compete on Thursday in the quarterfinals.

In her final game in Diddle, Gooch shot 50 percent from the field, notched 13 of her 20 points in the second half, and pulled in seven offensive boards in 37 minutes of play.

“It was perfect,” Gooch said of her last home game. “I’m just really proud of my team mates, especially Ileana and Alexis.  I mean the way we went out, it was with a bang.”

Alexis Govan managed to notch a double-digit performance in her final home game of her career, netting 12 points and four assists in a game where she saw limited minutes (20).

Junior Micah Jones finished at the heels of Govan in the scoring column with 11 points, and sophomore Kendall Noble rounded out the Lady toppers with double digits at 10. Noble added a team-high five assists and scored six of her 10 points from beyond the arc.

Freshman Tashia Brown came off the bench to tab eight points and six rebounds in a performance that drove the Lady Topper team in the second half.

The score was tied for 5:12 minutes of the game, at seven different points, with 10 lead changes taking place. WKU shot 46 percent from the field off of 57 attempts and forced 20 Old Dominion turnovers.

The Lady Toppers trailed for just 2:59 of the first half, but held a 35-31 cushion at the break after shooting 48 percent from the field and 44 percent from beyond the arc.

“They are a team that knows how to win,” Old Dominion Head Coach Karen Barefoot said. “I mean they are so experienced, and behind Gooch and her leadership they make big shots, they make big stops, and it is really hard to keep them off balance at times. But I felt like we battled well today.”

Coming out of the break, the game would remain close the majority of the half. The score would be tied five different times in the second half, and it wasn’t until an inspired WKU defensive made stops with roughly six minutes to go that the Lady Toppers’ ninth win in a row seemed likely.

“We talked in the locker room at half time that we really wanted to go to a more half-court defensive game because that was something I really felt like and our team really felt like we could do and cause a little change up,” Clark-Heard said. “I’m proud of them that they settled down and guarded and did the things they needed to do for us to be successful.”

WKU took the lead at the 6:11 mark after two Chastity Gooch free throws at 56-54. The Lady Tops would never let go of that lead, going on a 12-0 run and forcing Old Dominion to hit zero of their last six attempts, one of their last 14, and two of their last 18 to finish the game.