Fant leads WKU to a win in overtime at Charlotte 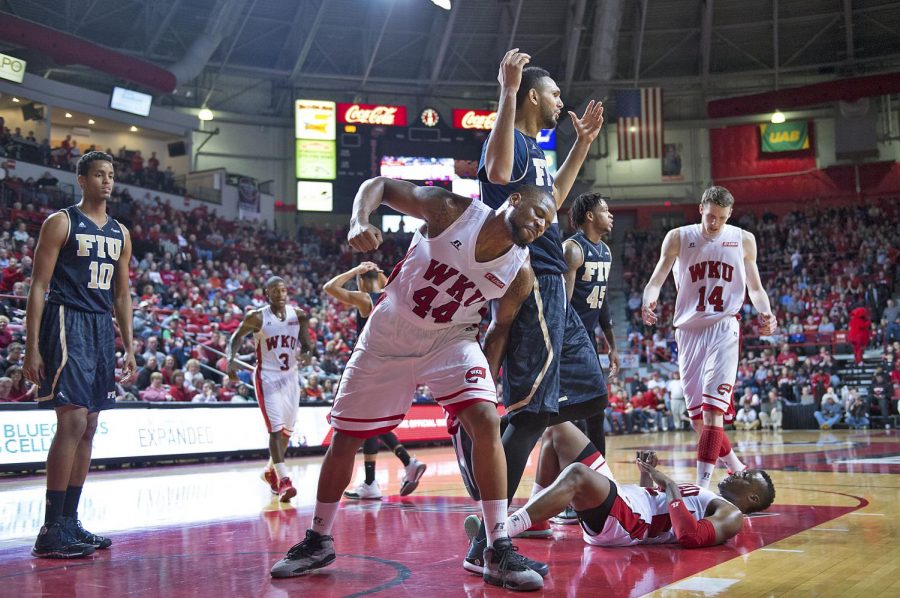 Senior forward, George Fant (44), drives his fist downward while reacting to missing a chance at tipping the ball for two-points during the game against Florida International University at E.A. Diddle Arena, Saturday, February 28, 2015. Jeff Brown/HERALD

A career-high in points isn’t a bad performance for a road conference game. Senior forward George Fant produced just that in his second-to-last regular season game of his career, defeating the Charlotte 49ers 88-84 in overtime. The win snaps a three-game road losing streak and puts WKU into a three way tie for third place in the Conference USA standings.

An ugly game dictated by a season-high 53 fouls made it hard for the players to get into much of a grove. Fant thrived in the situation scoring 28 points, 11-20 from the field, 6-8 at the FT line, and grabbing 10 boards for the man who averages 13.4 points per game and 8.5 rebounds per game.

The big performances comes after Fant grabbed his fourth foul midway in the second half and while senior guard T.J. Price sat on the bench after fouling out near the end of regulation.

“Second half on I thought he (Fant) was really good,” Head Coach Ray Harper said on the Hilltopper IMG Sports Network. “He played a lot of the second half and overtime with four fouls as well.

Charlotte started hot, hitting seven of their first eight shots but WKU went on a 14-2 run opening up a 31-26 advantage with 3:49 left in the first half. In the locker room with a 39-33 lead, WKU found themselves holding on to small leads for the majority of the second half. WKU lead 70-62 with 2:18 remaining but couldn’t hold onto as Charlotte tied the game at 74 near the end of regulation.

“I thought we had some guys really step up and make some plays,” Harper said. “We had opportunities if we would have made some free throws to really extend the lead and really finish the game off but we didn’t do it. But like I told out kids, I thought it was a gutty performance and played with a lot of heart.”

To go along with Price’s 13 points, sophomore guard Chris Harrison-Docks scored 18 points and played another productive game. The four players scored 72 of the team’s 88 points and led the team to its third straight victory. The streak comes after WKU dropped a season-high four consecutive game in the month of February.

WKU’s next game will be an important one, the final regular season game of the season will be played Saturday, March 7th at Old Dominion. The Hilltoppers defeated the Monarchs earlier this season for WKU’s first win against a ranked opponent at home since 1986. The game will determine the seeding in the Conference USA basketball tournament, which the Hilltoppers are in a three-way tie for third place with the Monarchs and UTEP.