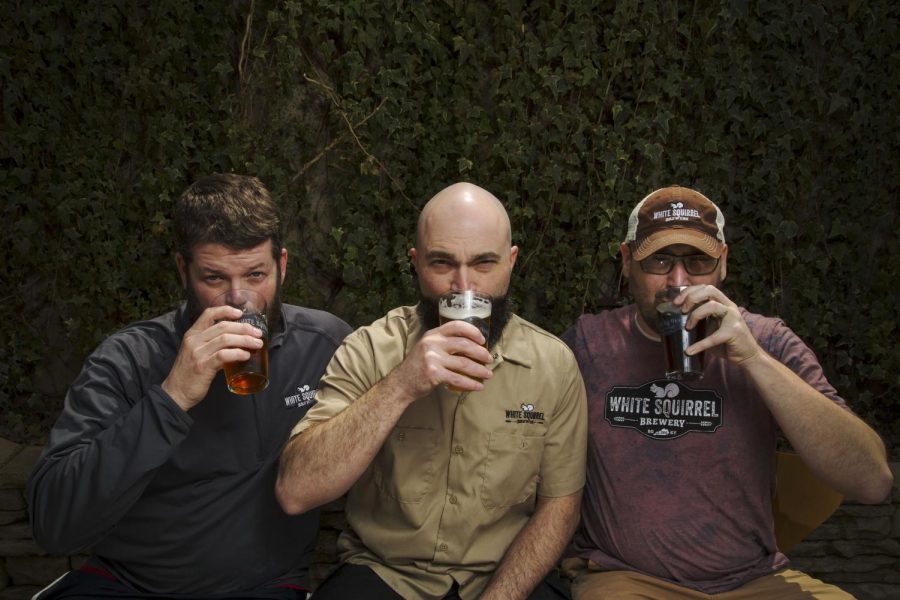 Former WKU students Sean Stevens (left), Damon Wilcox (center) and Jason Heflin have been home brewing for years. They recently received $11,050 in funding from Kickstarter which will help them open White Squirrel Brewery in the former Age of Reason tattoo parlor on Broadway Ave. in Bowling Green, Kentucky. They are currently remodeling the space and plan to open by May. White Squirrel will offer three beers brewed in-house, a German style Kolsch ale, an Indian pale ale and a brown ale. Mike Clark/HERALD

On 871 Broadway Avenue, there is a maroon building that houses a dream that has been brewing for about three years. By this May, WKU alumni Jason Heflin, Sean Stevens and Damon Wilcox hope to open the White Squirrel Brewery.

While the decision to start a brewery together has been an idea in the making for nearly three years, the three men’s experience with the craft goes back further than that.

Heflin said he and Wilcox started brewing together almost 20 years ago  after they had graduated from WKU. Wilcox has a long experience as a home brewer, and Heflin was amazed with what he was producing.

“The beer was excellent— on par with anything we were tasting that was being professionally done,” Heflin said.

Before teaming up with Heflin and Wilcox, Stevens was working as a brewmaster for the Hops brewery chain in Chattanooga, Tennessee. Three years ago he met the pair through a mutual friend and he said the idea to open a brewery together sparked between the three immediately.

“When we first met we had the endgame in mind,” he said.

With a plan in mind the trio embarked on a two-year research process, visiting 20 to 25 breweries across the nation. They also went international in their research, visiting breweries in Canada and the south Pacific island nation of Palau.

“We were all over the place: Colorado, California, Oregon, Washington, you know—all the hot spots for brewing,” Heflin said.

Heflin said through their research they learned what to do and what not to do when making plans for their brewery. Currently, their plan is to have White Squirrel be a nanobrewery, brewing enough alcohol on a small scale to serve their patrons. They will also have a full bar menu with their food items being created with beer recipes in mind.

White Squirrel is striving to keep their customer base in mind as well. Heflin said White Squirrel will be a community brewery and customers will have a say in what they brew.

“They’re going tell us what they want. They’re even going to name the beers,” he said.

Stevens elaborated saying White Squirrel will have ten taps, three of which will be dedicated to their beer and seven rotating guest taps. Wilcox said the three mainstays on tap would be Kölsch, India Pale Ale and Brown ale. Wilcox will serve as the head-brewing guy for White Squirrel.

“Biggest thing is to have a beer people want to come back and drink time and time because they like the flavor and they like the atmosphere,” Wilcox said.

He elaborated on the process involved in brewing from beginning, to fermentation, to the end process of carbonation. He also said many of the ingredients used in the ales at White Squirrel will be obtained from local farmers.

“Anything I can get locally I’m going to try to,” Wilcox said.

Heflin said working with the local community and local farmers to source their ingredients is something they pride themselves in.

It’s this sense of community involvement at White Squirrel that led the three to decide the name of the brewery. Heflin said the white squirrel was something they all knew from their days on the hill and is a prominent part of Bowling Green.

“It was a long, hard journey to get to the name, but once we got it we loved it,” Stevens said.

Although White Squirrel has yet to officially open its doors, the trio of brewers already have big plans in mind for their brewery.

While their collective dream is to expand, Heflin reassures there will always be a White Squirrel tap in Bowling Green.