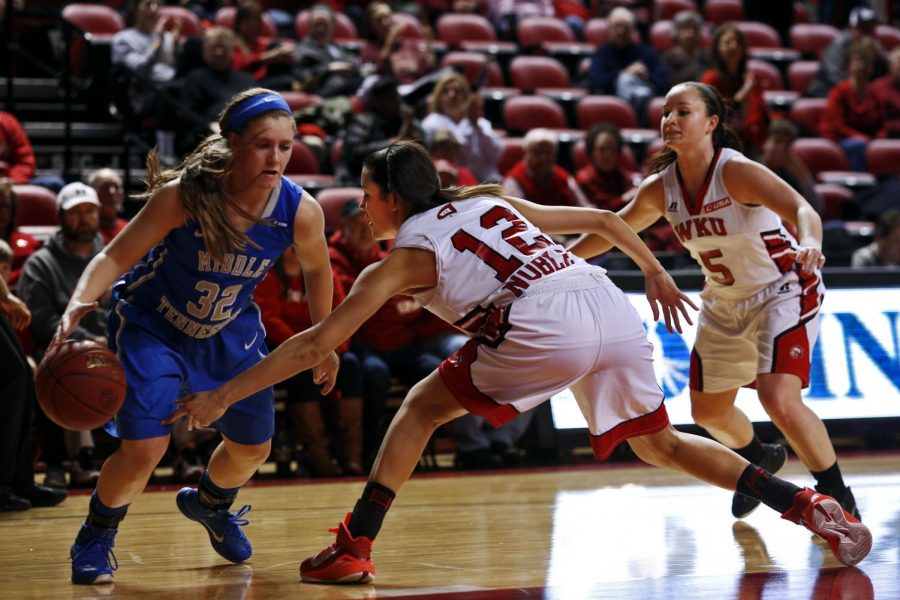 WKU's Kendall Noble (12) and Micah Jones (5) place full-court pressure on MTSU guard Caroline Warden (32) during the second half of the team's tightly contested matchup Saturday Feb. 21 in E.A. Diddle Arena. WKU would go on to defeat conference rival MTSU in a game that went down to the final buzzer by a score of 63-60. (Luke Franke/Herald)

The Lady Topper basketball team posted its sixth win in a row to claim a portion of the Conference USA Regular Season Title Saturday night with a commanding 88-47 win over FIU.

Freshman Tashia Brown led the Lady Toppers with a game and career-high 19 points, all of which came from the freshman in the second half.  Brown added four rebounds, one assist, and one block on the night.

WKU had five total Lady Toppers with double-digit points on the game.

Senior Chastity Gooch shot 8-of-11 from the field for 16 points and added four rebounds and one block. Redshirt sophomore Kendall Noble was right behind Gooch in the scoring column with 15 points, but was on the verge of a double double with game-high 9 assists and a team-high 7 rebounds.

The Lady Toppers shot 61 percent from the field off of 61 attempts, and were able to hold FIU to just 35 percent shooting off of 55 attempts.

WKU took the lead at the 12-minute mark 15-13 with a layup from Kendall Noble.  After taking this lead WKU went on a 22-5 run to end out the half.  The Lady Toppers would never let go of the lead, and would end the first half with a 37-18 halftime lead.