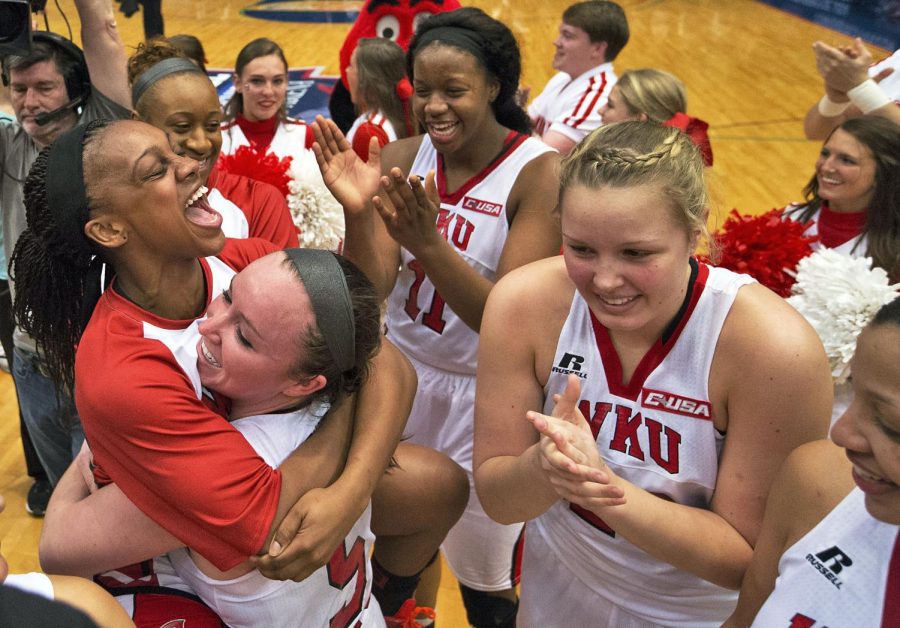 WKU's sophomore guard Keirra Muhammad (14) jumps on junior guard Micah Jones (5) after the Lady Topper's 60-57 win over Southern Miss in the championship game of the Conference USA tournament Saturday, March 14, 2015, at Legacy Arena in Birmingham, Ala. The Lady Toppers secured an automatic berth in the NCAA tournament with the win. Mike Clark/HERALD

WKU received the C-USA’s only automatic bid after defeating Southern Miss 60-57 on Saturday to lay claim to the conference’s regular and post-season titles.

Despite the Lady Toppers registering 30 wins this season, WKU received a double digit seed, possibly due to the fact they are from a single-bid conference.

The Lady Toppers were placed in the Albany sub-region, joining Louisville and Kentucky in that quarter of the bracket.  Though in the first and the second rounds, they will be competing in California.

“I think the girls are just super excited,” Head Coach Michelle Clark-Heard said. “At this point I feel for our fans, because I think we had a great following this year.  But at the end of the day, you can’t control what they think when they get behind closed doors so we are just happy.”

No matter the seed or the destination, Clark-Heard, her staff and players are excited to continue post-season play.

“[We’re] excited, just Excited about this opportunity with what the group has done,” Clark-Heard said. “To be able to go to back-to-back NCAA tournaments is something special, especially since it hasn’t been done since 1997-1998.”

The Texas Longhorns enter the tournament boasting a 22-10 record and just a 9-9 mark in Big 12 play, but with their strength of conference and schedule, were awarded a five seed.

“I’ve watched them of course,” Clark-Heard said. “They are very athletic, they have a big player that’s very good, and they like to get to the basket, so we just have to go and do a lot of work right now.”

Senior Alexis Govan, who was named C-USA tournament MVP, said the team wasn’t thinking about the seed before or after the announcement.

“Seeds don’t matter, all that matters is what you do when tip goes up and that ball is in the air.  That’s all that matters,” Govan said. “We weren’t really expecting anything, we just wanted an opportunity to play in the post season and keep on playing.”

Govan missed the better part of last season including all of post-season play due to a fractured tibia, but she’s excited to be an active and pivotal part of the team this time around.

“[I’m] super excited,” Govan said. “It’s just another opportunity for me to compete in the post season with my team, which I didn’t get to do last year.”