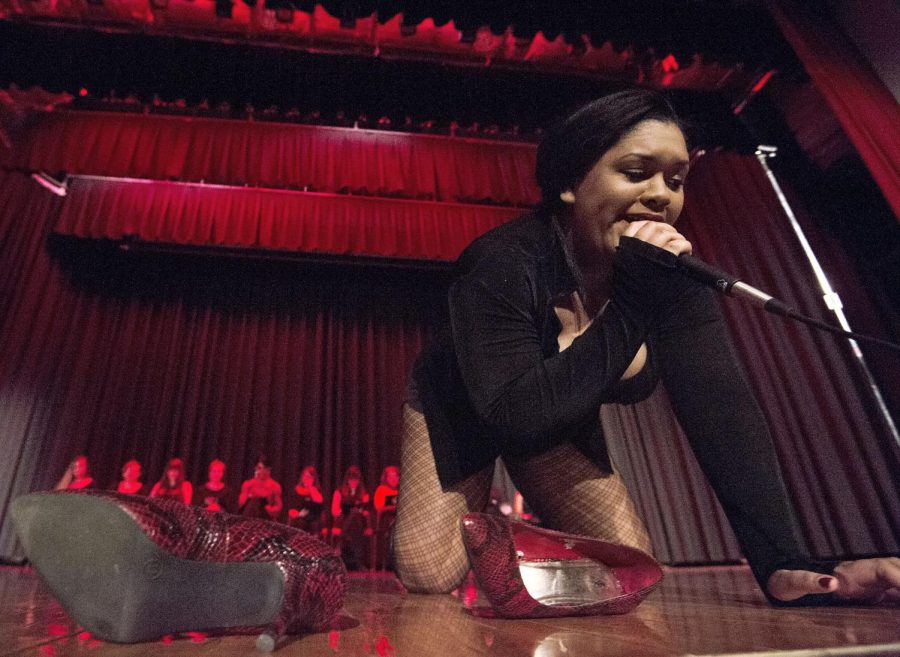 Lydia Billion, a WKU alumni living in Bowling Green, gives a demonstration of different types of moaning during the Vagina Monologues hosted by the Women and Gender Studies Program at DSU on March 17. This was Billion's third time performing in the Vagina Monologues. "I do this because its empowering, and I don't think the vagina gets enough credit" she said. Emily Kask/HERALD

The lights went out in Downing Student Union auditorium. The audience was left in the dark until a red spotlight shone on the stage and the curtain receded, revealing 12 students sitting in a row of chairs.

Everything was quiet for several seconds, until three female students stepped forward.

“We’re worried about vaginas,” they said.

The “Vagina Monologues” had officially begun.

The “Vagina Monologues,” performed on March 17 at 7 p.m., is a play written by Eve Ensler meant to empower women, said Louisville junior Erin Miller. Miller directed this year’s “Vagina Monologues.” The monologues were based on interviews Ensler conducted with hundreds of women regarding their memories and experiences of sexuality.

One of the discussions performed in the monologues is titled, “The Flood,” performed by Louisville junior Katie Swain. “The Flood” is centered on an interview Ensler had with an older Jewish woman whom Swain described as a “quirky, old lady”. The event that befalls the woman was one that left her hurt for many years.

“The event that happened to her with the boy that she liked kind of deterred her from love,” Swain said.

The Jewish woman recalled the time she was with the boy, Andy, and passion began to spark between the two.

“And I got excited, so excited, and well, there was a flood down there,” read the monologue.

Swain said other women can easily identify with events such as this one.

“I think a lot of the women that were participating tonight, and even across the world, can identify with that, having an experience that’s very traumatic and overcoming that in the end,” she said.

Another issue was addressed by alumna and Bowling Green native Lydia Billion. The piece Billion performed was titled “The Woman Who Loved to Make Vaginas Happy.” The piece was centered on a sex worker who only did sex work with women.

Billion’s performance got the audience roaring with laughter as she performed the different kinds of moans that the sex worker had dubbed.

“There’s the clit moan… the Jewish moan… the uninhibited militant bisexual moan… the college moan,” the list of moans went on as Billion played them out all on stage.

“It’s more, I guess, kicking against the patriarchy. A woman moaning on stage in front of several hundred people is not really PC,” she said.

The proceeds from the monologues went to benefit the non-profit organization Hope Harbor. Ericka Church, therapist with Hope Harbor, said the monologues provide women a way to share their stories without revealing their identities, and it helps educate others as well.

“It helps people realize what an epidemic sexual assault is,” Church said.

Church said the monologues were a way for their organization to reach out to students and let them know about the services they offer.

“It gives us an opportunity to reach out to students and let them know we’re here to help,” she said.

The monologues also provided an opportunity for interested students to learn, such as sophomore and Georgia native Bailey Vincent. Vincent said she was interested to see what the monologues were like because of her current class work with Gender and Women’s Studies.

This was Vincent’s first time seeing the performance, but the importance of it was not lost on her.

“I think it’s extremely important to let women know that it’s okay to be who you are as a woman and embrace that,” Vincent said.

Miller said the performance was important in changing one’s perspective, and Billion saw it as an opportunity for younger students to learn something new.

“It opens the door to something they may have never thought of before,” Billion said.

“I think it really does change your perspective,” Miller said.