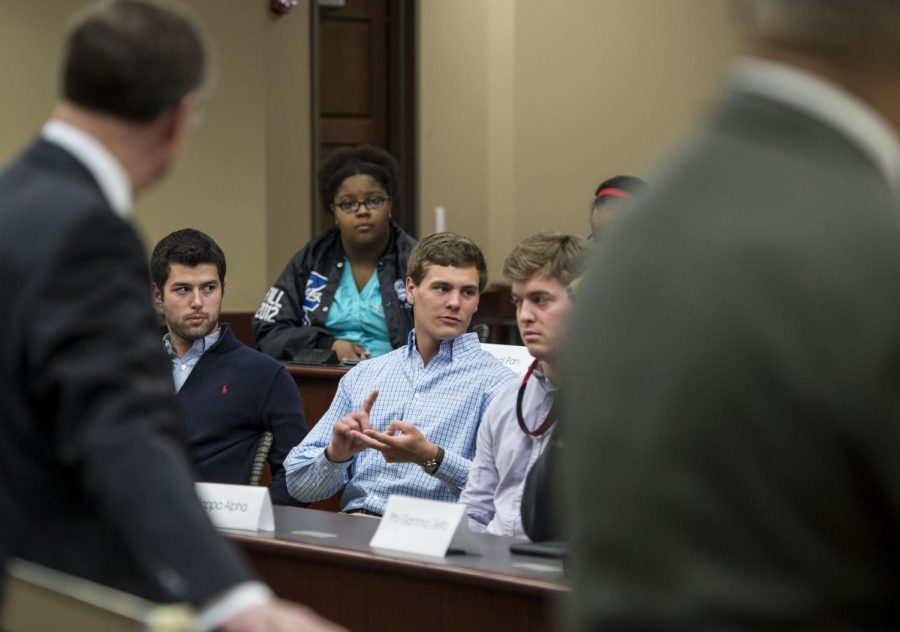 Sigma Alpha Epsilon Chapter President Dan Mulert responds to a question regarding his chapter's reaction to the racist chant that surfaced in a video from University of Oklahoma's SAE chapter last. President Gary Ransdell, himself an alumnus of SAE, invited all Greek chapter presidents to meet Wednesday, March 18, 2015, at the Senate Chambers in DSU.Nick Wagner/HERALD

For the first time in 18 years, every Greek organization president sat in the same room to address the same issue with President Gary Ransdell — racism within Greek culture.

“If anyone thinks that because I was in a WKU fraternity 40 years ago, that I would be anything less than swift and direct in dealing with any act of stupidity coming from any member or members of any WKU Greek organization today, then they are making a mistake,” Ransdell said, himself an alumnus of WKU’s Sigma Alpha Epsilon chapter. “I will be quick and harsh in my reactions to anything from anyone in any WKU organization that hints or suggests racism on this campus.”

Ransdell’s words were spurred by ‘acts of stupidity’ of a fraternity half the country away.

A video uploaded online March 8 showed the members of University of Oklahoma’s SAE chapter singing “there will never be a nigger SAE.” The chapter was disbanded, its members kicked out of the house, and two members associated with the chant were expelled.

Since the video surfaced, fraternity and sorority members across the nation have sought to dispel a growing negative image while reports of segregation, stereotypes and racism in Greek organizations steadily came into the light.

Ransdell said what happened in Oklahoma should never be repeated at WKU.

“Also understand that the freedom to express yourself does not release you from the consequences of your expressed thoughts,” Ransdell said.

The presidents congregated in the Student Government Administration offices Wednesday, March 18 at 3 p.m. On each chair sat a label with the name and respective group for each official.

Ransdell’s speech opened the floor for discussion on all sides of the issues.

“Honestly I was kind of baffled that it happened, but I wasn’t surprised it had happened,” he said.

He lamented, however, that just because this occurred in a Greek organization doesn’t mean all fraternities and sororities operate in such a manner.

“We’re all brothers, we’re all for one purpose,” Reyes said.

“They’re not that chapter,” she said.

Mulert said the chapter discussed how it was “some idiot that’s a student in Oklahoma” and how it didn’t reflect WKU’s chapter or even the national values.

“I never heard that chant before by the way,” Mulert said. “I can’t believe anyone would ever say that first of all.

Mulert said the situation provides a good opportunity to connect the Greek community.

“We really do need to reach outwards and connect with both communities,” Mulert said.

Amy Wolterman, Lexington junior, member of Alpha Gamma Delta and of the Panhellenic Council, thought the address was effective.

“It impacts all of us, every Greek chapter and organization,” she said.

Wolterman found the meeting an unfortunate result of racism, but said the  issue is something the Greek and non-Greek community has to face.

Ransdell emphasized unity throughout his speech.

“We are one academic community, one campus family, one family of brothers and sisters, black and white, Greek and non-Greek,” Ransdell said.