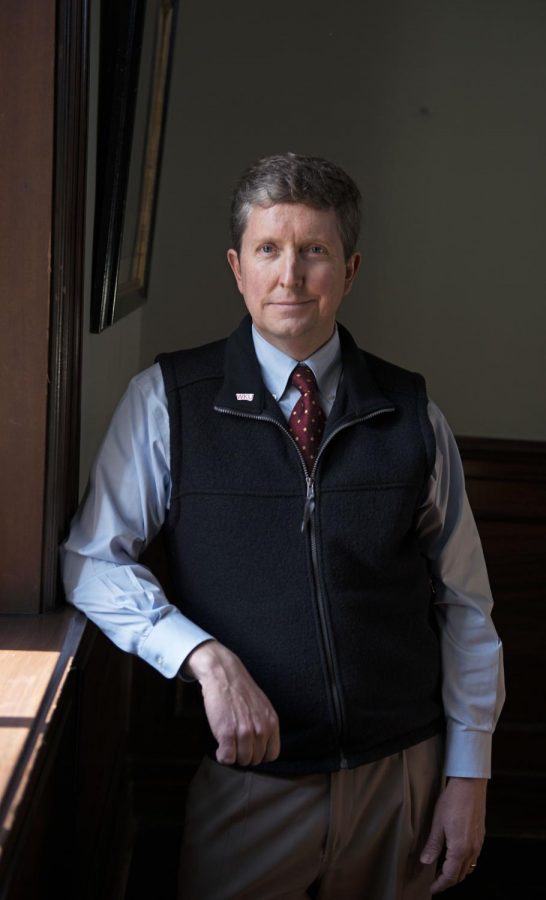 The new director of the Kentucky Museum, Brent Bjorkman wants the museum to at least be a more well-known entity for WKU students and the city of Bowling Green.

Bjorkman served as interim director of the museum during the fall semester of last year and acquired the title of director on Jan. 1 of this year. He had been away from the Bowling Green area for several years, moving back in the summer of 2012 when the Kentucky Folklife Program decided to come to WKU.

“It was a perfect opportunity to come back to the region, back to Bowling Green, back to Kentucky and back to WKU,” Bjorkman said.

As a folklore graduate student, Bjorkman has always had strong ties with the Kentucky Museum. He said he wrote his first grant to bring a Kentucky Arts Council program to the museum during his time as a graduate student. Now, as director, he has even larger things he wishes to accomplish.

“I really want the museum to succeed,” Bjorkman said.

He said that he’s finding the strengths of his employees and often seeks their input for the museum. Bjorkman remarked that he’s currently working with the Kentucky Museum board towards obtaining accreditation through the American Alliance of Museums.

“It’s really just to show you have the superior ability to put on good exhibits —  your facility is up to good standards as is your programming,” he said.

Vivek Puligundla, a graduate student from India who works in the gallery at the Kentucky Museum, said Bjorkman had already been having a positive influence on the museum and, specifically, gallery, even as interim director.

Puligundla noted that the new gallery exhibits, passed through the museum in recent months, have all met with positive reception.

Christy Spurlock, Kentucky Museum Education curator, agreed with Puligundla’s thoughts. She said Bjorkman is the perfect man for the director position and that he has a fantastic way with establishing partnerships.

She said that Bjorkman will aid the education department in their endeavors and help them in getting more funding for their programs. She continued saying that Bjorkman will help with the overall outreach of the museum into the community as he’s full of great ideas.

“He waked in the door with ideas,” Spurlock said.

As new director, Bjorkman is striving towards greater visibility and attendance for the museum.

“I’d love to have the Kentucky Museum as a destination,” he said.

To help the museum become more of destination, he has been working towards gallery exhibits that connect with WKU’s current “Year Of” program with the focus this year being the “Year of Ecuador.”

As such, Bjorkman said Monday, Feb. 9, at 4:30 the museum will hold the grand opening of their multimedia gallery exhibit by Ecuadorian artist Oswaldo Guayasamín.

Bjorkman said that this exhibit and an exhibit planned for next semester with the “Year of South Africa” theme is something he wants the museum to work towards and show how it affects us on a local and international level.

All of these exhibits will be done in hopes of connecting the Kentucky Museum more with the community. Spurlock said the museum has done well in the past with community outreach given their limitations, but under Bjorkman, it will improve.

“I think the museum will be more connected to the community,” Spurlock said.

Lynne Marrs Hammer Ferguson, Kentucky Museum artist-in-residence, believes that the aspect of community outreach was cut back in the past, but will be seen more now.

“A goal will be to have more collaborative programming with campus groups and the community,” Ferguson said.

Ferguson said the museum hopes to offer new opportunities for student involvement and be able to get outside of the Kentucky Museum building to offer up opportunities to other locations on campus.

“We want to make sure students know we’re here,” she said.