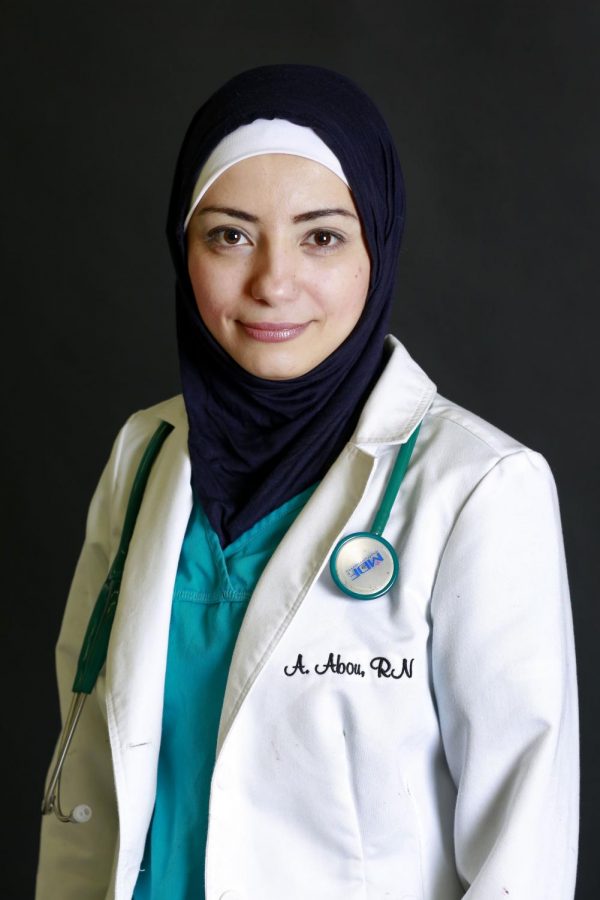 Amina Abou is a Nursing student from Casablanca, Morocco. After six years in the United States and while working as a Registered Nurse at Greenview Hospital in Bowling Green, Abou decided to become more serious about her faith. As a result of this she chose to start covering her head with a hijab, or scarf worn by Muslim women.

As Amina Abou prepared for her shift at TriStar Greenview Regional Hospital, she donned her green scrubs, white lab coat, stethoscope and one final piece of clothing — her hijab.

The 27-year-old Casablanca, Morocco native has worn a hijab to work, for the last three months.

“One of the questions I get from my patients is ‘do you have to wear it? Are you forced?’ Something like that,” she said. “I tell them no. Listen, first of all, I have my own job, my own car. I’m very, independent educated. Nobody told me. It’s completely my own choice.”

Abou identifies as a practicing Sunni Muslim (“I work on weekends, but I go to services when I can”), but she didn’t wear the hijab during her time as an international nursing student at WKU, where she received her associate’s degree in nursing, last May.

However, when a relationship came to a heartbreaking end, Abou found solace in religion.

“The hijab makes me feel protected from hurt again,” she said. “It also demands respect. You have to look at me and what I can do, rather than how I look. I feel very secure in my hijab.”

Stewart said she had served as an adviser and instructor for Abou, and she took on the role of surrogate family member to the international student, whose stature is, “not bigger than a minute.”

“There is a blanket statement of being in a rural area, and the media has played into a stereotype, and as awful as it is to say, we still have patients who will request another nurse if it’s a black nurse,” Stewart said.  “Usually, there is a judgment based on the color of their skin or their size or their age. We see patients at their worse, under stress and sickness, and any underlying prejudices or racism can come out.”

While Abou said she didn’t encounter much animosity on the job, she said she doesn’t mind answering the questions.

“I try to treat my patients as if they are my family, with the best treatment they can receive,” she said. “I’ve never been encountered to any bad treatment. It’s more, I think, general misconceptions — people who use media as their main way of learning about certain cultures or beliefs.”

Her love of nursing and patient care rubbed off on 27-year-old Rukia Hassan. The Somalia native and international student met Abou through mutual friends, and they’ve been close ever since.

“In her final year of nursing school, I was at college and still not decided on what to do,” Hassan said. “She has helped me see the benefit of nursing — not only is it a good career, but also that she [explained] the other aspects of helping people.”

As the daughter of a Jewish father and Muslim mother, Abou said good patient care is an outward manifestation of a close relationship with God.

“I’m not judgmental to people,” she said. “It’s not me who will be judging you. I feel very tolerant to everybody. I’m just as human as much as you are.”

Her grandmother, Zoubida, also played a crucial role in her upbringing and positive outlook, Abou said.

“She always tells me to stay hopeful, that you are a flower, waking up to the sunshine,” Abou said. “She told me, if you don’t teach you, your experiences and time will teach you. I’m very grateful because I feel like I went through a lot of maturity and learning. If you saw me when I was 21 years old, it’s very different from now.”

Now, Abou studies for her US citizenship exam in addition to continuing nursing classes at WKU.

In response to the recent shooting of three Muslim students at the University of North Carolina, Abou said one quote sticks out to her.

“One nation, under God, indivisible with liberty and justice for all,” she said, reciting the pledge. “It’s the indivisible, the unity and bringing everyone together as people, that I love so much … It hurts me to see Americans hurting other Americans.”