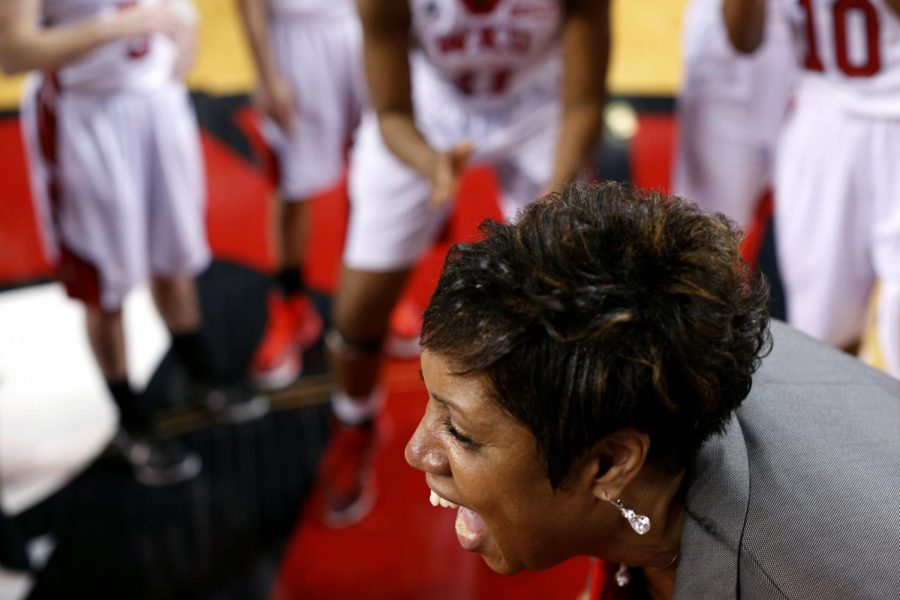 The WKU women’s basketball team bested the No. 1 team in the Conference USA on Saturday afternoon defeating Middle Tennessee State University 63-60 in front of a crowd of 3,023 in Diddle Arena.

The Lady Toppers utilized defensive stands at both the end of the first and second halves to edge the Blue Raiders in a game with five lead changes where WKU led the match for 19 seconds less than MTSU, but still pulled out the victory.

“It was just a team effort across the boards…” Head Coach Michelle Clark-Heard said. “We weren’t shooting the ball well at all, but at the end of the day we found a way to win. This was like a NCAA game—it was a knock-down-drag-out and I’m just proud that our girls kept battling.”

Senior Chastity Gooch lead the Lady Toppers with 17 points off of 7-17 shooting.  She added six rebounds and one block, while fellow senior Alexis Govan’s tenacious double-double performance spurred the Lady Toppers on to victory.

“We have been talking a lot to them about our tenacity, telling them to keep playing and playing hard and competing,” Clark-Heard said. “That’s why Alexis Govan’s nick-name is ‘Go-Go’, because she is never going to stop.”

Despite struggling from the field with a 3-of-15 mark shooting mark on the game, Govan shot 6-of-8 from the free-throw line to combine for 12 points and 12 rebounds.

WKU’s defensive stands proved to be pivotal, as they forced 19 MTSU turnovers to cash in for 29 points while they just gave up eight.

“I know 19 turnovers is the difference in the ball game,” MTSU Head Coach Rick Insell said after the game. “We didn’t take care of the ball today—we did a very poor job.  (WKU) did a really good job.”

“As a coach, sometimes you have to go with your gut,” Clark-Heard said. “I changed up the starting lineup—and that was the first time I’ve done that in a while. I put Jalynn McClain in because she has been unbelievable in practice—and now you see why.  Without her in the first six minutes, we don’t have a bucket.”

The personnel change proved vital for the Lady Toppers, especially in the first half when McClain accounted for six of WKU’s first 10 points in the game.

“She was huge,” junior Micah Jones said. “She came out and played with confidence and knocked down shots when we were struggling to make any.  She just came out with energy and always plays good defense—she really showed up today,”

Ileana Johnson reclaimed her place in the starting lineup in the second half as the Lady Toppers took the first basket of the half to go up 10 points.  This 10-point lead would tie for WKU’s largest of the half and game.   The score would be tied at three separate occasions over the course of the second half, first at 53, then again at 55 and 57.

The Lady Toppers would claim their final lead of the second half with just 1:33 left to play in the game after a layup from Alexis Govan to put the score at 61-60.  Chastity Gooch nailed two huge free throws with 22 seconds left in regulation to finalize the score at 63-60.

The Lady Toppers are now perched atop the C-USA standings with a13-2 record in the league and an overall of 24-4.  WKU now controls their own destiny for the regular season title, as they prepare for a Florida road-swing against FAU and FIU this week.