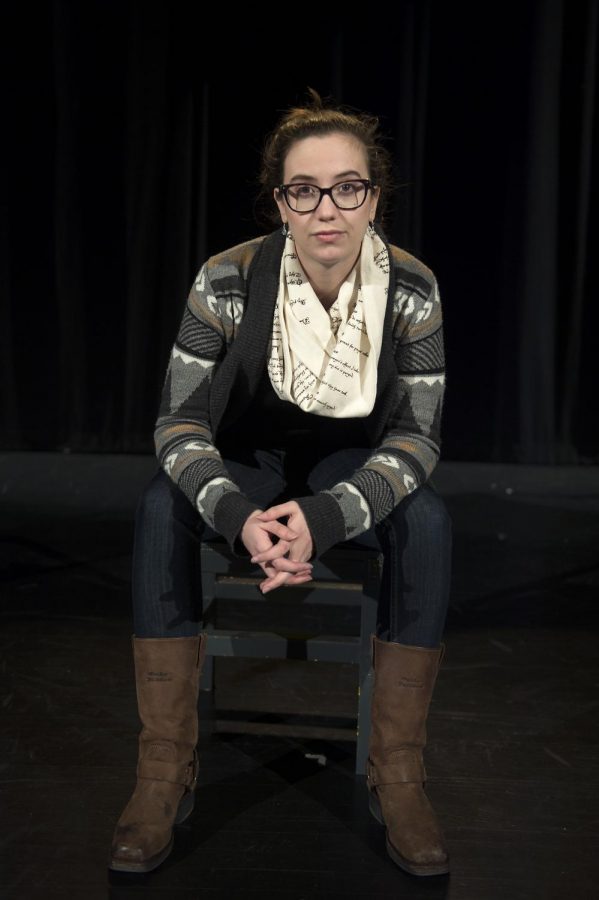 February 24, 2015 Bowling Green, Kentucky | 25 year old Elise Iannuzzi, from Bowling Green, is a Theatre professor at WKU and Director for BG OnStage. "I get to share what I learned and gained from the theatre," Iannuzzi said as she talks about what she likes about teaching. | Photo by Jeff Brown/Herald

Ever since she saw her first Broadway show, “The Phantom of the Opera,” when she was four-years-old, Elise Iannuzzi knew she wanted to be on a stage.

“I was hooked. We bought the cast recording, and back then it was still on tape, so I would listen to it over and over,” she said.

Even today, after seeing the show over 20 times, it’s still her favorite. She has come a long way since then, having lived in New York, directed plays and been an extra in “The Avengers,” “The Amazing Spider-Man” and “Law & Order: SVU.” Now, she is back at WKU teaching theater appreciation.

Jeff Smith, the technical director at Van Meter Hall, said he has known Iannuzzi since she was in junior high.

“She was always someone who was passionate about being in theater,” he said. “You have to have a certain mentality when you do theater. You have to enjoy it. There isn’t enough money to do it for any other reason.”

Five years after seeing “Phantom of the Opera,” Iannuzzi auditioned for her first show, “Annie” and got the part of one of the orphans. She said even at a young age, she was never nervous of a stage.

“I’ve never gotten stage fright because I’m in my zone,” she said. “It was just this [is] what you do, that’s it.”

Unlike orphan Annie, Iannuzzi always had the support of her parents. However, they always pushed her to get an education before taking the stage.

“They didn’t want me to be the actor that, once I graduated high school, moved off New York and try to make it,” she said. “They wanted me to get an education — make sure I had a little bit of a backup plan incase.”

Her mother, Flora Stuart, is also involved in theater as the president of BG OnStage. She said that she got involved with theater because of her daughter.

“Parents get brought into what the kids do,” she said. “We have always wanted our kids to find something they are passionate about and want them to have a living.”

Stuart said she takes what her students are good at and what they love to steer them in a direction that is practical.

Iannuzzi grew up in Bowling Green and attended WKU for two years. In 2009, she made it to New York and attended Marymount Manhattan College where she completed her undergraduate studies in acting.

Upon first arriving in the Big Apple, she was taken aback by many of her professors’ styles of teaching. Most of them were very hard on her, which she wasn’t used to.

“As a doe-eyed newbie to the big city, I kind of crumbled a little bit from that,” she said. “It’s hard when someone tells you that you won’t succeed just to get to you so you work harder.”

To earn a bit of extra cash she worked as an extra in major motion pictures and popular TV shows.

“I did it more for fun,” she said. “It was something cool I could do when I had a free day.”

During this time she also participated in her first off-broadway show.

“I don’t remember the title of it because it was Spanish,” she said laughing. “I played a corpse. So, that’s my big break right there. I was a dead body that had to be very still on the floor for two hours.”

Her days as a corpse were limited, however, as quickly after meeting professional actors, she began to second-guess herself.

“Seeing how unstable that life is, I totally changed my mind and didn’t want to do it anymore,” she said. “I mean I still love the theater and appreciate it, and if someone offered me a part in a broadway show, of course, I’d take it.”

Iannuzzi said there is no stability in theater, and she realized the risk involved in the art she grew up loving.

Iannuzzi has also always been a “family person.” She has always known that she wants to be a mom.

“That lifestyle doesn’t really support that,” she said, referring to theater. “It’s always kind of career first, and then once you get established you can have a family, but the establishment is never a given.”

Iannuzzi wasn’t ready to let go of her lifelong love of theater. She went to graduate school at Emerson College in Boston and earned an masters in theatre education. It was then that she discovered her love for directing.

She worked at an elementary school in Boston and helped it establish its first drama program.

“They had no drama before,” she said. “My last year there, I focused on creating this drama club and give it some structure and some guidance.”

Knowing she probably wouldn’t be there much longer, Iannuzzi left it in the hands of one of her friends. She knew that BG OnStage had an opening for an education and artistic director position.

She packed her bags and came back to the bluegrass, where she was hired full-time by BG OnStage.

“Once I graduated, I wanted to come back home. So, it was nice that it worked out,” she said. “I’m still involved in theater, and it’s still very much what I want to do, but in a different light.”

She’s been back on the Hill for about a year, working at BG OnStage with children who are just as passionate for theater as she was after seeing “Phantom of the Opera.”

Smith said she is light-hearted, and that the kids she directs respond to that.

“She can just spontaneously break into a dance on stage or just have a good laugh and that is what you want,” he said. “You what the training she has and also be spontaneous because that is what theater is all about.”

Smith said he hopes she is able to settle in and take stock of things so that she can guide it to where it should be.

Iannuzzi was also hired at WKU as a Theatre Appreciation professor this semester, and said it is one of her biggest accomplishments.

“I can direct,” she said. “I can act. I can work with kids. But this is a completely different monster. It’s my first real big-girl job.”

Her mother sees that she enjoys teaching both college students as well as the kids at BG OnStage.

“I am just so proud of her,” Stuart said. “She loves being involved with youth theater and involved in the university setting. I know she is thrilled to be teaching.”