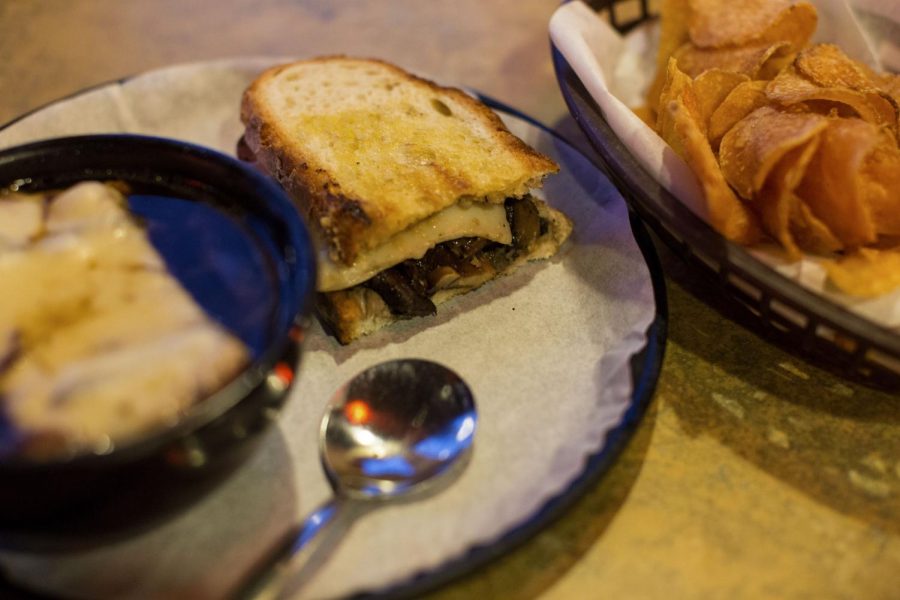 A combination platter at Buckhead Cafe comes with a choice of a wrap, sandwich, soup or salad, giving indecisive customers many options. Pictured is a platter with a bowl of French onion soup, a grilled portobello mushroom sandwich with marinated portobello mushrooms, mozzarella cheese, roasted red peppers, roasted garlic and balsamic vinaigrette on a white panini, served with a side of chips. Luke Franke/HERALD

Buckhead Cafe is a suitable, but unspectacular entry in Bowling Green’s field of fast-casual restaurants.

Like any fast casual eatery, customers are free to sit wherever they please. There is ample room in Buckhead’s open space to do so. A diverse array of booths, tables and high tops attempt to satisfy any potential customer preference.

Likewise, the menu is also full of choices. Buckhead adopts the Panera Bread model of soup and sandwiches, while contributing burgers and wood-fire pizzas to the mix.

The pick-two combination encompasses a considerable portion of the restaurant’s main menu, which is both liberating and paralyzing. Buckhead Cafe clearly caters to tastes across a wide spectrum.

The Portobello Panini made the best impression. Visually, the sandwich appeared hastily compiled and the portion size was less than expected. Yet the generous share of beefy portobello mushrooms, mingling with the sweetness of the roasted peppers and a douse of bright, acidic balsamic sauce, formed some satisfyingly complex bites. This is certainly worth consideration.

Conversely, the French Onion soup struck an appetizing figure, but failed to execute on the flavor. The dark, thin broth was heavily populated with caramelized onions. A substantial hunk of toasted bread and melted mozzarella cheese hovered on the surface. What could have been an interesting iteration proved rather singular and mundane. The predominant savory flavor failed to showcase the fragrance and sweetness of its principle ingredient. It was still satisfying in the way that hot, savory soups tend to be, but it needs a renovation.

The kettle chips were a pure, salty crunch. They fulfilled what was expected. If anything, they made Buckhead’s “killer chips” sound more intriguing.

Buckhead Cafe’s spectrum of dishes sounded quite enticing, but they ultimately proved a little underwhelming.