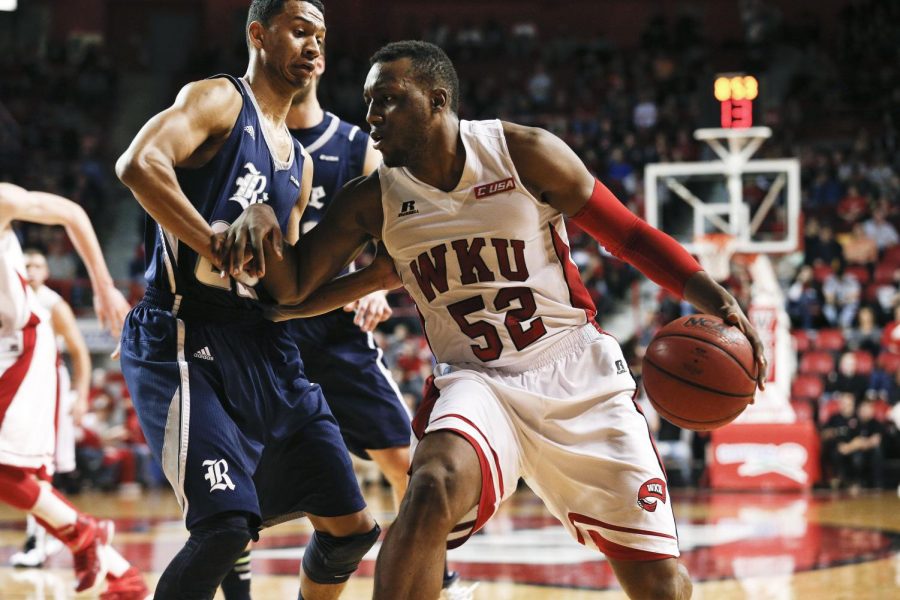 WKU senior guard T.J. Price dribbles to the lane against Conference USA opponent Rice Feb. 7, 2015 at E.A. Diddle Arena. The Hilltoppers would go on to lose to the Owls 72-68 in only their third home loss of the season. (Luke Franke/Herald)

The WKU basketball team has had a volatile inaugural season in Conference USA. Sitting at 16-10, 9-5 C-USA and currently in fourth place in conference standings, Hilltopper expectations are changing after every game.

Road games proved to be the most recent thorn in Head Coach Ray Harper’s side. WKU’s away record sits at 4-7 this season, contrary to its 11-3 record in Diddle Arena.

The Toppers’ C-USA record has taken a blow as of late, losing four consecutive games for the first time since the 2011-12 season. WKU is 2-7 in its last nine games, including losses to Rice and Marshall, both ranked outside the top 250 in RPI according to ESPN.com (Rice at 267 RPI and Marshall at 299).

“It’s the hump — we’ve got to get over it,” senior forward George Fant told the Bowling Green Daily News. “We knocked off (nine) straight. You saw the effort every night. It’s going downhill a little bit, but we’ve got to see who’s motivated and still ready to play.”

The Hilltoppers have shown flashes of success this season. The nine straight was a stretch that included wins against then No. 25 ranked Old Dominion, currently second ranked UTEP and wins over five other conference opponents.

The success expanded into a 5-2 record in the month of December and an even more impressive 8-1 record in the month of January. Fant had a streak of eight straight double-double performances in the span that gained him C-USA Co-Player of the week, averaging 21 points and 12 rebounds in a three-game win streak.

“Our confidence is never going to be down,” senior T.J. Price told BGDN. “I don’t care if we’d lost 10 games in a row. We’re going to come out like we just won 10 in a row. We know everything is possible. It’s just about work.”

WKU will hope to string together a few wins to gain confidence before the C-USA tournament on March 11 to 14 in Birmingham, Alabama. WKU looks to defend their fourth place ranking, with the top four teams receiving a first round bye.

“There’s ultimately only so much we can do,” Fant said. “We can talk about it all day, but once you get out there, it’s up to the person to buckle down and do the job.”