Hilltoppers hit the road with C-USA title in sight 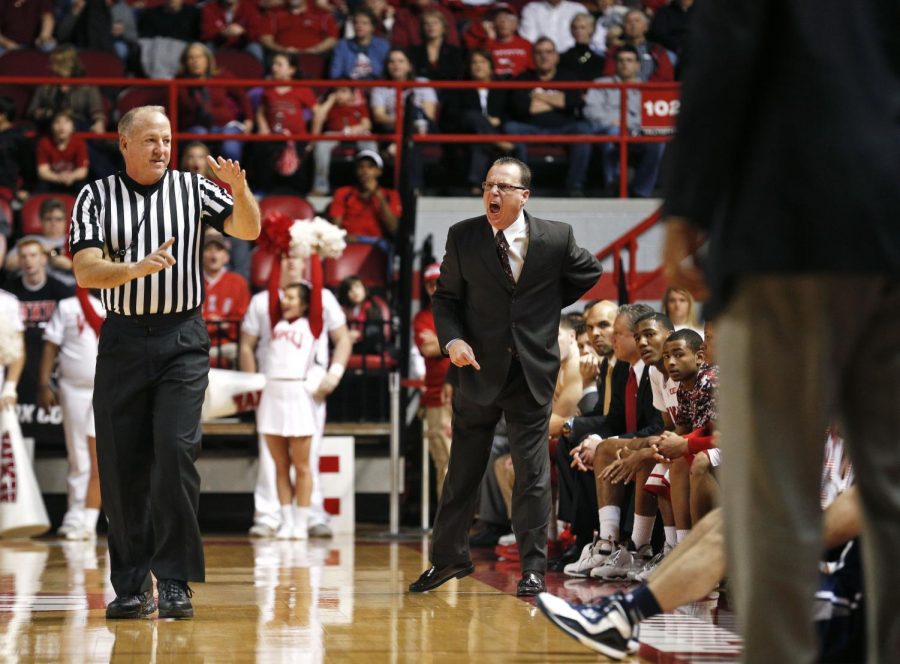 WKU men's head basketball coach Ray Harper draws a technical foul against Conference USA opponent Rice Feb. 7, 2015 at E.A. Diddle Arena. The Hilltoppers would go on to lose to the Owls 72-68 in only their third home loss of the season. (Luke Franke/Herald)

While March is traditionally know as a college basketball month by sports fans, it is February that pits conference foes against one another, battling for conference and national positioning.

In this final month of conference play, the Hilltoppers sit at 16-7 overall and 9-2 in the Conference USA, finding themselves in a three-way tie for first place in the league. They will have to find ways to win on the road, traveling away from Diddle Arena for five of the team’s final seven games.

“It’s going to be interesting,” Head Coach Ray Harper said, Monday on his weekly radio show. “You’ve got three teams tied with two losses, and then you have two teams right behind those three with three losses. You’ve got five teams right there bunched together, and four teams are going to get a bye, going into the conference tournament. Hopefully we can continue to win.”

The teams Harper is referring to include the Hilltoppers, Louisiana Tech and UAB, who all stand at 9-2 in conference play. UTEP and, previously ranked, Old Dominion remain within striking distance at 8-3 and 7-3, respectably.

WKU has boasted a 2-1 record against the other teams in the top four of the conference.  A road showdown against UAB is set for Feb. 19, a pivotal game for the Hilltoppers, after a 72-68 home loss to the struggling Rice Owls (7-15, 4-6 in C-USA).

“We controlled our own destiny,” Harper said. “That’s where you want to be. You don’t want to depend on, ‘This team needs to beat UAB, or this team needs to do this.’ That’s why the game Saturday hurt so much. If you’re going to win a conference championship, you really need to protect your home court. We weren’t able to do that Saturday, and now, we have to win some games on the road that people maybe don’t think we’re going to.”

Possibly the only way the Hilltoppers would reach the NCAA tournament would be to win the C-USA tournament in Birmingham, Alabama on March 11-14. Now, with the task at hand, WKU has to focus on improving its 4-4 record on the road, against some familiar and new opponents.

“We just didn’t come out with a sense of urgency in the first half,” Senior guard Trency Jackson said after the Rice game. “We can’t win like that. We’ve got to stop doing that. We can’t start games without energy, like we started tonight and for the last two games. We have to turn it around.”

While five of the last seven games are on the road, five of the Hilltoppers’ last opponents are teams WKU has already defeated. With the Thundering Herd of Marshall being the Hilltoppers’ next opponent, an opponent they beat 81-62 at the beginning of January. WKU faces two road games against heavyweight opponents UAB (13-11, 9-2 in C-USA) and Middle Tennessee State (13-11, 6-5 in C-USA).

After Feb. 22, WKU’s last four games (Florida Atlantic, FIU, Charlotte and Old Dominion) are all against conference opponents that the Hilltoppers have previously defeated.

“We’re a team that, if we’re good on the defensive end, and we are rebounding the basketball, we have a chance to win games,” Harper said. “If we are not, we’re a bottom-feeder — middle of the pack at best.”

For three-fourths of its inaugural C-USA season, WKU defeated their first, first-ranked opponent at home, since 1986, rattled off a nine-game winning streak and 13 games have been decided by single digits.

It will be the final fourth of the year that will seal the Hilltoppers’ post-season fate.