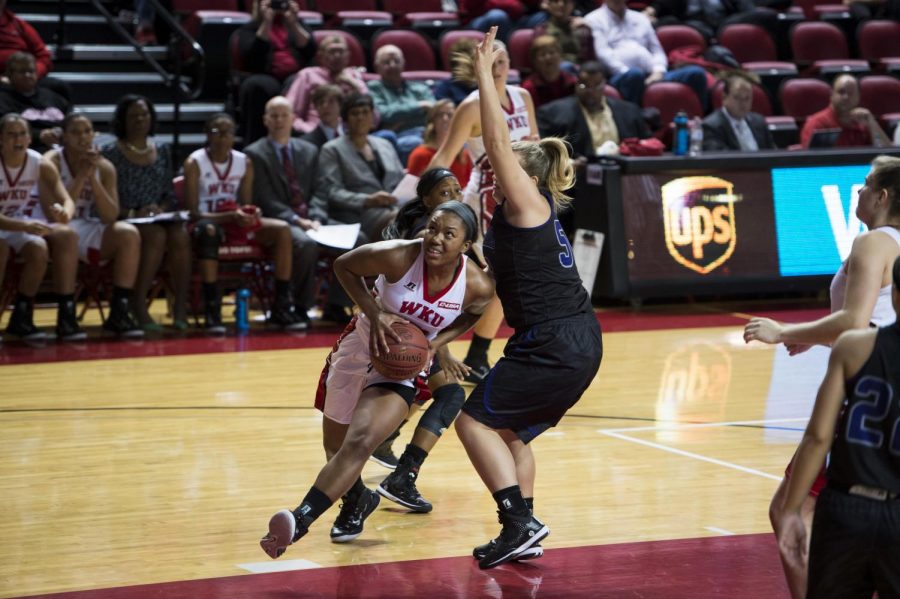 Junior forward Jalynn McClain drives towards the basket during the second half of WKU's Nov. 14 game against Central Arkansas. The Lady Toppers defeated the Sugar Bears 93-57 to advance in the Preseason Women's NIT. Nick Wagner/HERALD

“It is hard to win on the road,” Head Coach Michelle Clark-Heard said. “It doesn’t matter what anybody’s record is, it is just really tough and I’m proud of how our girls played.”

The Lady Toppers played without senior All-American candidate Alexis Govan, who did not travel with the team due to injury.  Kendall Noble led the Lady Toppers with a game-high 23 points, 16 of which came in the first half and 10 rebounds to punch in a double-double performance. Noble shot 9-of-10 from the field as the Lady Toppers never trailed in the contest.

Junior Jalynn McClain tabbed a career high 16 points after earning her second consecutive start. This marked the first time this season that McClain has turned in a double-digit scoring performance.

Senior Ileana Johnson had 10 points to round out the five Lady Toppers with double-digit points.

The win marked WKU’s 11th road win this season.  With a win on Saturday against FIU, WKU would match its program record for most road wins in a season.

Head Coach Michelle Clark-Heard moves to 37-15 overall in games away from Diddle Arena.

WKU stays in first place in the Conference USA standings entering the last three games of the season.

Lady Toppers next game is on Saturday against FIU in Miami.