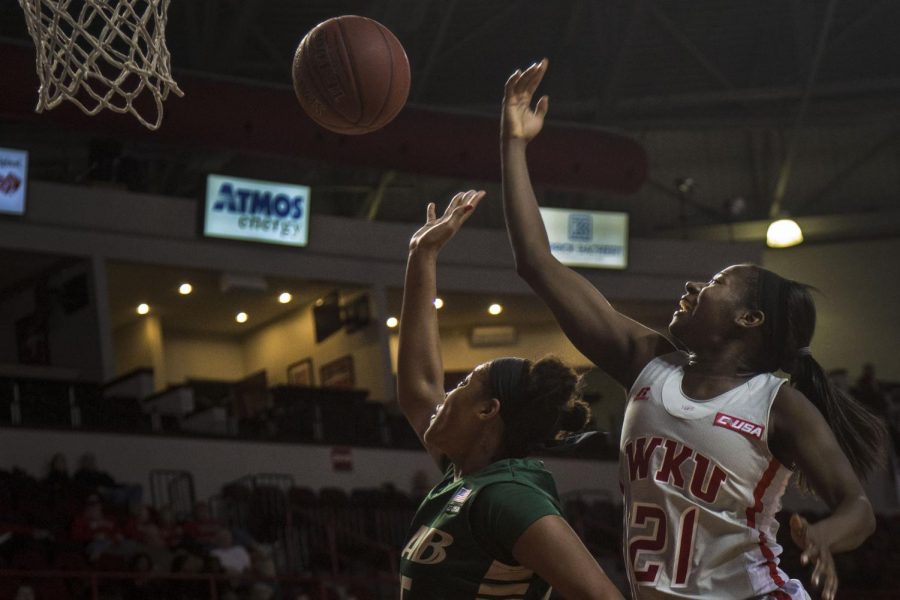 Senior guard Alexis Govan attempts a rebound against University of Alabama at Birmingham senior forward Janae Smith (25) at Diddle Arena on February 19, 2015. WKU would go on to win the game 59-51, in their fourth straight win in a row. Nicole Boliaux/HERALD

“I was just really proud of the way we were able to play down towards the end,” Head Coach Michelle Clark-Heard said. “We didn’t play as great as we normally do, but we found a way to win, and different people stepped up big.  Alexis was big in the first half—Tashia Brown made some big shots, and of course towards the end we got those rebounds and took some time off the clock—I think that really helped us.”

The Lady Toppers shot just 37 percent from the field off of 60 attempts on the night, and was out-rebounded 44-31, but managed to force 20 Blazer turnovers for 18 points on the way to the team’s fourth straight win.

Senior Alexis Govan led the Lady Tops with 17 points in a night that saw fellow veteran leaders Chastity Gooch (4-of-15 from the field) and Micah Jones (0-of-5 from the field) uncharacteristically struggled offensively. Govan was 4-of-4 from the free throw line, 6-of-10 from the field, and added three steals, three blocks, and two assists on the evening.

“We set down and we guarded a little bit more than we did in the first half,” Govan said after the win. “Mainly we just started to attack the basket—Coach Heard was telling us that we were starting to fade away and not attack as hard, so finally we just decided that we were going to go hard to the basket.”

Four Lady Toppers ended the night with double-digit points including Govan’s 17.  Kendall Noble was next in line, notching 13 points along with four rebounds, three saves, two assists, and one block.

“Kendall does such a great job on the front press, and when we are able to change up different looks I think it keeps the other team on their toes,” Clark-Heard said. “We were just really glad we were able to do some different things.”

“Chastity came up huge at the end,” Clark-Heard said. “Getting a lot of offensive rebounds to put us in the position to be where we were at so we could win this game.”

Tashia Brown rounds out the double-digit scorers with 10 points to go along with four rebounds and a steal.

WKU is back in action Saturday afternoon against Middle Tennessee State University in Diddle Arena at 2 pm CT. At press time, MTSU still held sole possession of first place in the conference, with the Lady Toppers at their heels in second.