Steady the Ship: WKU looking back to move forward 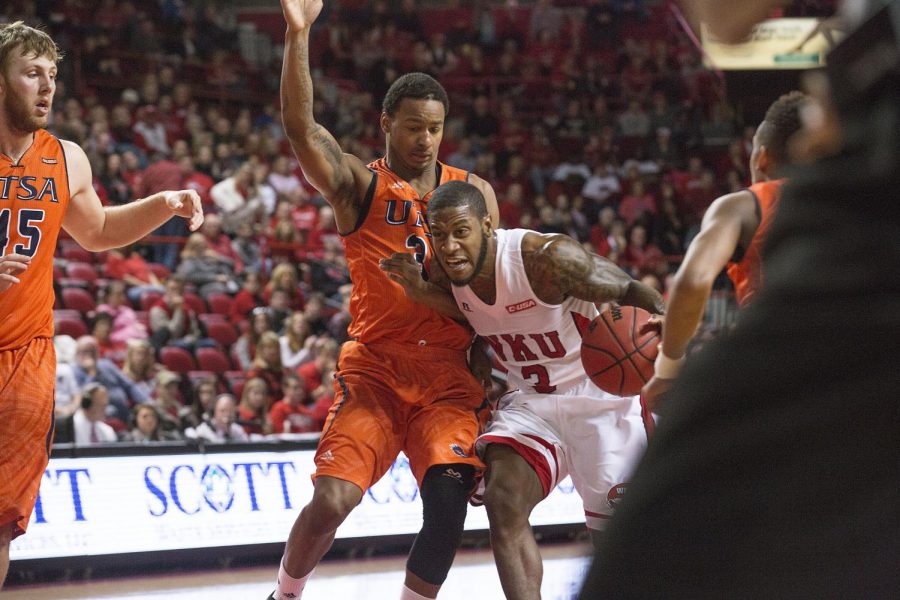 WKU senior guard Trency Jackson (3) breaks into the lane during the first half of the Hilltoppers' matchup against Conference USA opponent UTSA. The Toppers would go on to win the game 83-74, remaining undefeated in conference play. Nick Wagner/HERALD

After a 5-2 record in the month of December and an 8-1 record in January, the Hilltoppers (16-8, 9-3) are 1-2 in the current calendar month, with consecutive losses for only the second time this season.

In the process, WKU has fallen from first to third in the Conference USA standings, lost hope of an at-large bid in the NCAA Tournament and seen its RPI drop from 69 to 107. All are causes for concern for a team that has struggled with the bottom half of their conference.

WKU remains in contention for a C-USA tournament bye, awarded to the top four teams in the conference. With four more wins out of the remaining six games, WKU would register a 20-win season for the 43rd time in program history and third time under Head Coach Ray Harper.

The Hilltoppers held on to a nine-game winning streak in January, and the confidence from that streak has lingered through recent trying times.

“That group is not going to lose confidence,” Harper said. “It’s more about them understanding ‘this is why we got beat’, and I think they did understand that after watching film and doing some things yesterday. I thought they were really good and locked in yesterday at practice and knowing where our deficiencies are right now.”

WKU is no stranger to its upcoming opponents either.

With the next two Hilltopper games on the road against UAB and Middle Tennessee, WKU plays its final four games against teams they have already faced and who the Hilltoppers hold a 4-0 record over.

“We are still pretty confident,” sophomore forward Ben Lawson said. “Obviously, we’ve had a few tough losses that we shouldn’t have lost. But I still feel like we are on a good track. Coach has us in good spirits. We watched film yesterday, and he was trying to emphasize that this isn’t a session where we are just going to chew you out for all the things you’ve done wrong, but it’s how we correct and how we move forward. So, I think we’re doing pretty well right now.”

Harper has seen regular-season struggles with his teams in the past. With Harper at the helm for the past four seasons, the Hilltoppers have seen 44 total losses, including four three-game losing streaks in the 2012-13 season. However, Harper has been able to keep the ship steady.

In his time on the hill, Harper is 67-44 overall and has led the Hilltopers to an 8-1 record in conference tournament action, resulting in two championships and automatic berths into the NCAA Tournament in 2012 and 2013.

The opponents may be different, but the mantra of Harper remains. The confidence and play of this team comes from a coach who is looking for another successful end of the year run.

“Alertness off the ball has been the biggest problem. Guys just aren’t rotating and not being in the proper position — not being alert off the ball,” Harper said. “This is the time of year, you got three weeks left and you need to start figuring it out and playing well. Hopefully we can do that — I thought early January we really hit a stretch where we were playing well. Maybe this snow is good for us.”