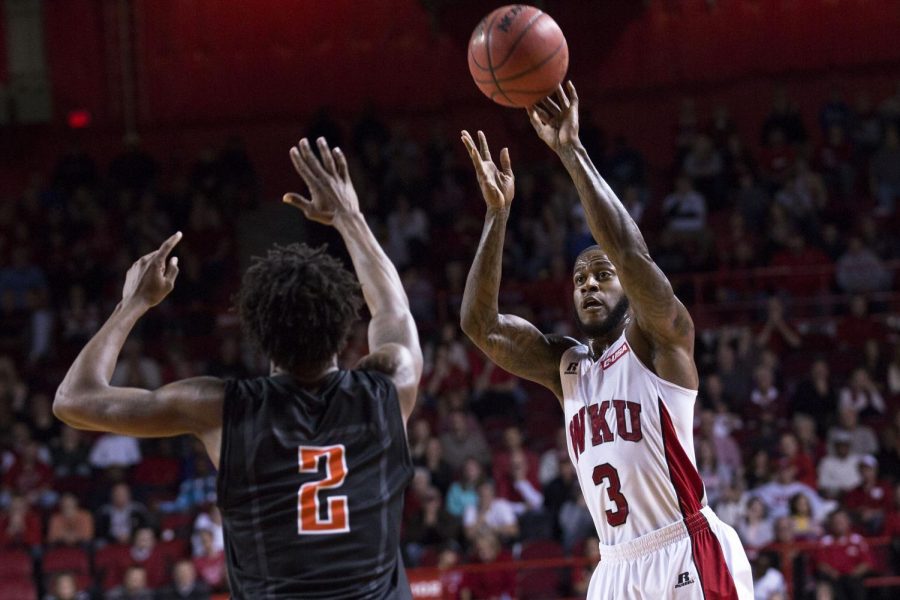 WKU senior guard, Trency Jackson (3) shoots a three-point shot in the face of UTEP's Omega Harris (2) during the two teams' hotly contested overtime matchup Thursday, Jan. 22 at Diddle Arena. Jackson led the HIlltoppers in scoring with 14 points and led the team to a 71-66 victory in overtime. Luke Franke/HERALD

The WKU basketball team put forth a solid effort in the second half versus Rice Saturday night, but still could not win the game. The Hilltoppers (16-7, 9-2 C-USA) overcame a 17 point halftime deficit, but ultimately were unable to hold off the Rice Owls, losing 72-68 at home for only the third time this season.

“We didn’t come out with a sense of urgency,” senior guard Trency Jackson said. “We can’t start games without energy, how we started tonight and the last two games.”

The Rice Owls started at a blistering pace, shooting 68.2 percent in the first half and taking a 43-26 halftime lead. Seth Gearhart, a player WKU struggled with the entire game, scored 11 of his game high 31 points in the first half. He shot 9-13 from the field and went a perfect 10-10 from the free throw line.

Down big at the half, WKU Head Coach Ray Harper showed this team knows how to come from behind. WKU used two second half runs, an 11-2 run to start the second half and a 10-0 run with 8:57 left, to close the gap against the Owls. Jackson scored 16 second half points to lead WKU into a winning situation during the final minutes of the game.  He finished the night with 23.

With the game tied at 59 with 4:48 remaining in the game, the teams began to trade punches in front of over 5,000 fans at Diddle Arena. Senior forward George Fant managed to put WKU into a 65-64 lead with 2:12 remaining, but the Hilltoppers could not hold on to it.

Timely free throw shooting and a WKU scoring drought in the final 2:07 of the game allowed for the Owls (7-15, 4-6 C-USA) to pick up their second road win of the season.

“They got us. They did what they needed too to win the game, give them credit,” Harper said. “We’re a team that if we’re good on the defensive end, and we are rebounding the basketball, we have a chance to win games. If we are not, we’re a bottom-feeder, middle of the pack at best.”

WKU starters scored 65 of the team’s 68 points, the other three points coming from sophomore forward Ben Lawson. Seniors T.J. Price and Fant finished with 17 and 11 points respectably while Price finished 0-7 from beyond the arc. Sophomore guard Chris Harrison-Docks ended with 14 points but was 3-13 from the field.

“You only get so many opportunities, and we’ve got seven left, five of those on the road,” Harper said. “We better be good on the road going down the stretch.”

The Hilltoppers are now tied with UAB and La. Tech at the top of the Conference USA standings.

WKU’s next game will be Saturday, Feb. 14 at Marshall.