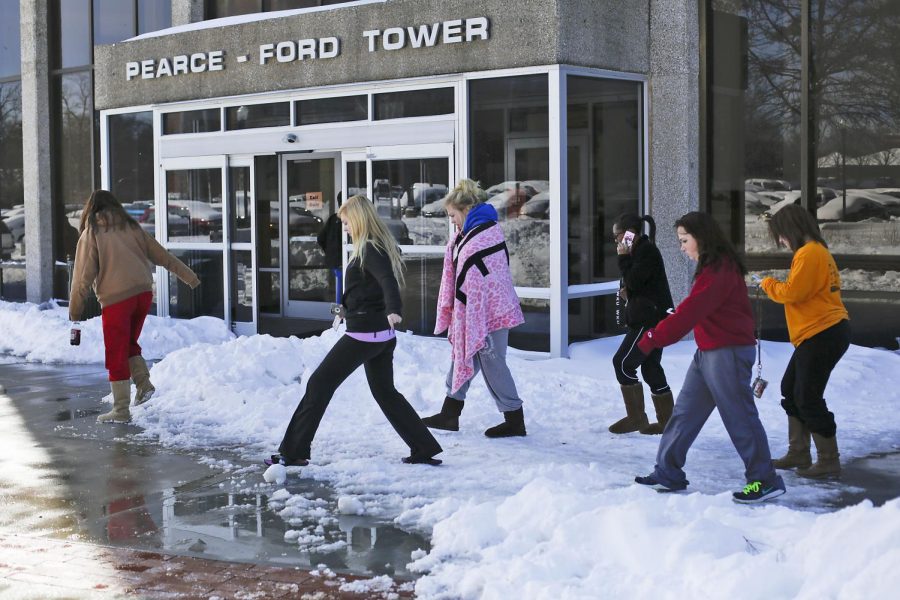 Residents of Pearce-Ford Tower walk into the building to gather their belongings after being displaced by a power outage, Tuesday, February 17, 2015. The residents of PFT, Meredith and Zacharias hall are without electricity and heat until further notice. Ashley Cooper/ HERALD

She began her morning ritual right at 6:30 a.m. under the pleasant, warm water of her shower. Class was cancelled, and she was looking forward to a nice day inside Pearce-Ford Tower. She didn’t know that she would soon find herself out in the snow.

Calhoun freshman Chloe Dempsey didn’t think much of the lights flickering as she reached for her shampoo. But then the water pressure suddenly dropped, and the alarm began to blare before she could even rinse out the suds.

Dempsey, along with PFT’s hundreds of other residents, were evacuated and told to find housing with friends on or off campus, in the Downing Student Union or virtually anywhere else that could take them. Dempsey spent the first night out of PFT in DSU.

“It was a public area, so it definitely wasn’t great,” Dempsey said. “And there were no showers.”

Thursday, Feb. 19, PFT is reopening its doors. Two days after the incident began, Dempsey is being reunited with a hot shower.

After one night in DSU, Dempsey and her roommate sought refuge at the Wesley Foundation, a local campus ministry. Other students found refuge in friend’s apartments, such as Clinton freshman Allie Thomas.

“They didn’t do a lot to help,” Thomas said. “They were like ‘We hope you can find a place to stay. Sorry for the inconvenience.’ and that’s all they said. It was like they didn’t really care what happened to us.”

Shelbyville freshman Ashley Hilger spent Tuesday night in DSU after being displaced. Hilger said she wasn’t completely comfortable in DSU as it was slightly cold and she had to sleep on the floor.

“But the worst part was they kept the lights on,” she said. “They shut a couple of them off, but the lights were still on and I was like, ‘Oh wow. I have made a grave mistake.’”

Hilger said she had plenty of access to food while at DSU, such as the Fresh Food Company, and was able to brush her teeth in one of the bathrooms. Both Hilger and Dempsey praised the support given by the WKU community and said they were thankful for all who reached out to help.

Other students who couldn’t find anywhere to stay ended up sleeping in local hotels. Louisville freshman Lindsey Jones, who lives on the 26th floor of PFT, stayed in the Drury Inn on Scottsville Road with five of her friends.  The hotel reservation cost was about $280, with each friend paying roughly $46.

Jones said WKU could have done a better job informing students about the PFT situation.

“It was very late in the day before anyone got any information about the building closing or really what was actually going on in there,” she said.

Housing and Residence Life informed PFT residents that the dorm would be closed for the next two nights at about 4:30 p.m., 10 hours after the power initially went out.

Jones said she would be upset if she didn’t end up getting reimbursed.

“We paid for a dorm that we would be able to stay in year-round and we weren’t able to do that,” she said. “I also feel like the emergency procedure wasn’t very well-thought out and they didn’t really have a place for us to stay.”

“I’ve not heard that discussed because available rooms on campus were not used,” he said.

The dorm was closed due to a power outage caused by a blown electrical cable. The 45-year-old cable took two days to successfully replace.

This isn’t a new issue on WKU’s campus. Last year, cold weather contributed to an electrical malfunction closing Northeast, Bates-Runner, and Southwest Halls. This is the second year in a row that WKU’s electrical systems have displaced students.