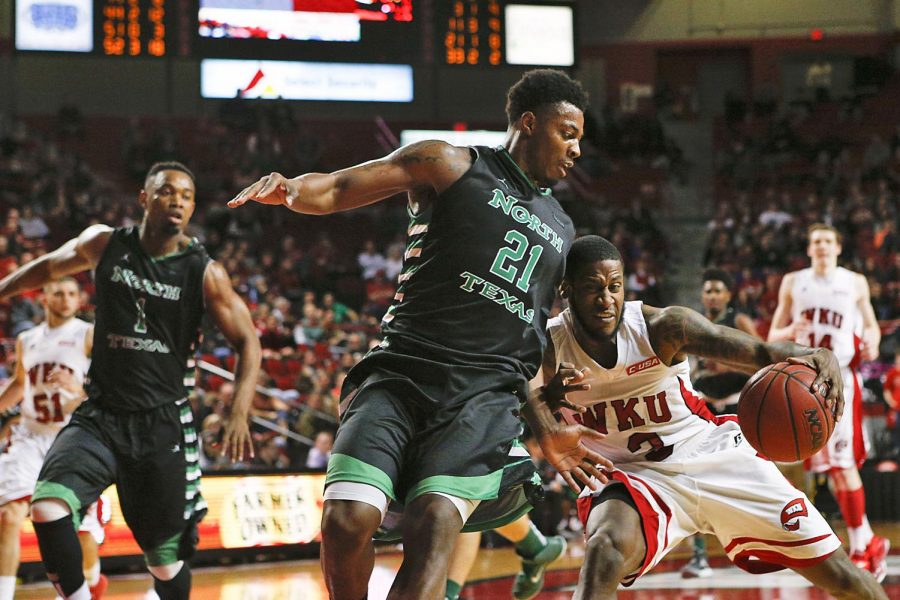 The Hilltoppers will return to Diddle Arena, after a nearly three-week hiatus, Thursday night to take on Florida Atlantic.

They will stay at home for Saturday night’s Conference USA clash against Florida International, and look to put an end the their current four-game losing streak with four games remaining in the regular season.

After beginning league play atop the conference with a 9-1 record, the Hilltoppers have since lost four straight (three were on the road where the team holds a 4-7 record).

Entering the weekend, FAU sits in last place in the conference at 1-13 (9-21 overall), while FIU sits in 10th in the 12 team league with a 6-8 record in conference play and a 7-23 overall. Against FAU and FIU in Diddle Arena, the Hilltoppers hold an 18-5 overall record.

The Hilltoppers will look to tie up loose ends on the defensive side of the ball.  Head Coach Ray Harper maintains it is important to stop giving up “reaching” fouls by playing a more solid defense.

“That’s something we have been talking about all week—stop reaching,” Harper said. “I have watched it over the last few games and we have bailed guys out by reaching and fouling when it wasn’t necessary; when the defender had played solid defense.”

If the Hilltoppers win out their games this season, Head Coach Ray Harper would become the very first coach in program history to win 20 games in each of his first three seasons at the post of head coach.

Despite the current losing streak, WKU would have the fourth seed in the upcoming C-USA Tournament and a first-round bye if the season ended today. They anticipate that winning out will offer them a similar result.

Harper has maintained a calm demeanor amidst the losing streak and still sees his team’s potential as high in the face of recent adversity.

“If we were losing by 30 and playing terrible then the alarms would be going off, but they aren’t,” Harper said. “We are so close, but at the same time it doesn’t do you any good to be close. You have to get over the hump and you have to win games, and I know we can do that.”

WKU defeated Florida Atlantic earlier this season in Boca Raton, 88-85 in overtime, but the Owls have won two of the last three games contested in Bowling Green. The Hilltoppers lead the all-time series between the two schools 11-5.

T.J. Price leads C-USA in scoring at 17.9 points per game, and in that current position would become the first Hilltopper to lead a league in scoring since Jack Jennings completed the feat in the 1991-92 Sun Belt Conference season with 19.1 ppg.

It would be the highest finishing average of any Hilltopper since Courtney Lee averaged 20.4 points as a senior in the 2007-08 season.

Price has a minimum of 15 points, seven rebounds and five assists five separate times this season, and has shot 33-36 from the free throw line this campaign.

Harper knows that success for his team in this final stretch will likely be defined by the playoff seniors George Fant and Price, both of which Harper believes have made big strides as athletes and students in their final Hilltopper campaign.

“Start with George and TJ,” Harper said. “1,500 point scorers, they are on the same team, they have meant a lot to this program, but more importantly when they leave I know they are going to do well, and that’s what its all about—preparing these guys for after basketball.”

Action starts on Thursday night at 7 p.m. in Diddle against FAU, with the same tip off time set for Saturday’s contest against FIU.